Another fruit which grows wild in Tsukuba (and other parts of Japan)- MUBE (moo beh むべ) 30 October, 2018 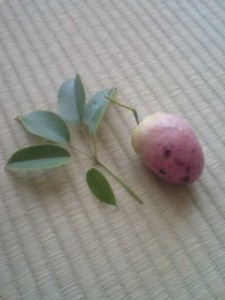 Before a meeting with Junko Yamamoto, I`m always filled with anticipation. This is because, more often than not, she comes bearing surprising OMIYAGE (gifts), from the seemingly endless stream of interesting places she visits both in Japan and abroad (though what I really do look forward to is her smiling face and lively stories!).

Last Thursday, when I arrived at the Community Center in Hojo, she handed me a bundle wrapped in paper, saying that THIS time, it was not something from some far off reaches of the globe or Japan she had brought, but rather something which she had found growing in her very own garden, right here in Tsukuba .

Opening the package, what I found was MUBE ( pronounced MOO- BEH), which grows, mostly wild, on vines in Japan ( as far north as Kanto), Southern Korea, Taiwan and China. These fruits closely resemble their relative, the AKEBI, which I have written about before.

Though both of these purple-ish, mango shaped fruits appear in autumn, they can be distinguished one from the other by the fact that AKEBI open, as if slit length-wise, when ripe, and MUBE do not. Also, the leaves of the AKEBI vines fall away, while those of the MUBE do not. In addition, it seems to me that MUBE are generally smaller and less mango-shaped, They come closer to looking like a smooth-skinned, purple and yellow kiwi fruit. 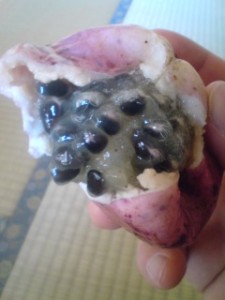 Both AKEBI and MUBE are eaten in the same way. You break them open ( easily done with your bare-hand), suck out the delicately sweet pulp inside( the texture is not unlike that of green grapes), and chew gently, before spitting out the pits ( which are much larger with MUBE).

The abundance of pits makes eating these fruits troublesome and messy, which is why they are not popular commercially ( though you can find them on sale at fancy gourmet shops in Tokyo for about 400 Yen each!).

Mube seeds are spread in bird droppings ( and by other animals, especially monkeys), and thus, these vines can pop up anywhere. Asakura-San at the Azuma Community Center told me that she used to eat MUBE which grew wild in her garden in central Tokyo.

(The scientific name for MUBE is stauntonia hexaphylla, and it appears that the substance stauntonin, found in the roots and stems of its plant, can be used for antirheumatic and diuretic purposes).

Though most older Japanese ( those who grew up during and just after the war) are familiar with both of these rustic fruits ( the akebi and the mube), you might be surprised to find that few younger people have ever heard of them, let alone eaten them, especially MUBE ( I was surprised when while researching this article two professors in the department of agricuture told me they had never heard of MUBE!)

There is still at least one place in Japan where MUBE get a little attention, and that is in a little town on the shores of Lake Biwa, in Shiga Prefecture- Kita Tsuda Cho ( 北津田町). It is there that it is said the MUBE got its name, and for centuries there was a family there who offered ( kenjo suru, 献上する） MUBE each year to the Imperial Family. In recent years the town`s goverment has taken this up as a theme for local revitalization , with MUBE now growing in front of the train station and at various places around town.

Here is the story of how MUBE got its name, and of the fruits connection to this town on the shores of Lake Biwa.

In the 7th century, the Emperor Tenji ( 天智天皇), who reigned from 661-672, went out on hunting expedition to the reedy marshlands around Lake Biwa. It was there that he met a vigorous, elderly couple who had eight strong sons.

When the Emperor asked them how they stayed so healthy into their old age, the couple answered-

” In these parts there is a rare fruit which has the power to give long life and keep sickness away. We eat it each autumn, and that is why we are as healthy as we are.’

When the Emperor sampled one of these fruits for himself, he declared- MUBE NARU KANA (むべなるかな), which in classical Japanese means- It is indeed so!

This is how, it is said, the MUBE got its name.

The Emperor then proceeded to order that these fruit be sent to him every autumn. There are records of offering of MUBE arrving at the palace from this town since the 10th century, and this continued up to 1982, when the family which ahd been traditionally responsible for doing so, moved away.

In 2005, the town was given permission to restart the annual offerings.

By the way, in 1940, the Emperor Tenji`s spirit was enshrined at a Jinja (shrine) in that very same town.

Another interesting story related to MUBE and Kitatsuda Town, is that in the year 1878 ( Meiji 10), while the Meiji Emperor travelled the country, he stopped by and composed a poem in recognition of the towns long history of sending MUBE to his family- O-Gimi ni sasakeshi mube wa furuki yono tameshi to shitau tami no makokoro (大君ささけしむべは古き代乃ためしとしたふ民のまこころ), which I translate ( quite poorly) as: Very Many and Long Years, I Have Been Sent MUBE, a True Expression of the feelings of The People.

All this rushed through my head as a slowly savored the MUBE which Junko had brought.

After spitting out a mouthful of pits, I wiped my hands and face, and said a satisfied -YES, INDEED ( MUBE NARU KANA!) 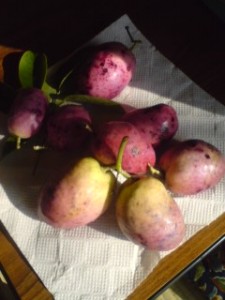