Tsukuba ( and much of the rest of Japan)- a Paradise for Fresh Fig Lovers- and a recipe for stewed figs and fig juice! 25 September, 2018 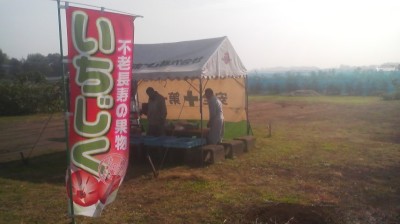 At this roadside stand in Tsukuba`s Kurakake neighborhood  freshly picked figs are sold from mid-August through mid-November. Get there early- they close up each day as soon as they re sold out. These friendly local farmers have been growing MASUI-DOPHIN figs ( a variety developed in Hiroshima Prefecture in 1906) for 15 years. They open at about 9:30 AM- so get there early. 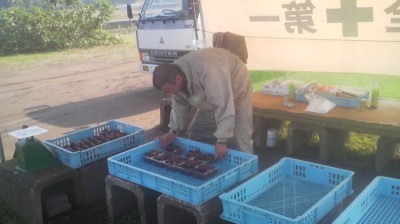 The farmers at the roadside stall only pick the ripest figs each morning- if you don`t get there early they`ll be sold out! 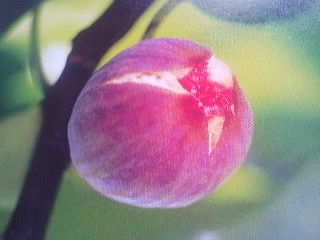 A fig on the tree. Though imported dried figs ahve become more readily available in Japan in recent years, FRESH figs are available in abundance in Tsukuba and much of the rest of the Kanto Region from September through early November.

I had occassionaly eaten them dried, but until coming to Tsukuba I had never eaten- or even seen, a fresh fig.  It isn`t too hard to FIGure out why. If you read up a bit on this fruit, posslbly the first ever plant to have been cultivated by man ( even before grapes, wheat or rye!)- you learn that fresh figs have a very short shelf-life. In other words, they can`t be kept very long and they are difficult to transport. 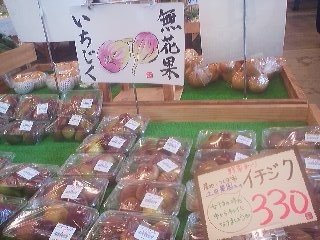 Fresh figs on sale in Tsukuba. The Chinese characters used to write the word fig (ICHIJIKU) are 無花果which means: FRUIT WITH NO FLOWER – since the ancient chinese did not realize that this plants flowers, scores of them, are found INSIDE the part that we eat

In other words, fresh figs are commonly available only in season- and in areas where they grow in abundance- like Ibaraki and Chiba Prefectures in Japan.  For lovers of these fruit in their fresh form (and soon after my first taste I joined their ranks!) – Tsukuba is a veritable paradise. They are not only grown by local farmers and vegetable gardeners but are often grown in peoples` front yards.

From September through early November you can find them in overflowing abundance at green-grocers, supermarkets and even at temporary road-side stalls. 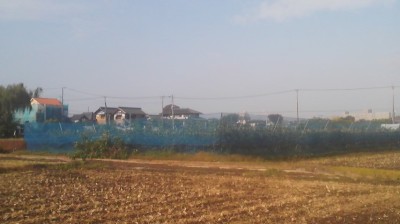 A fig orchard in Kurakake, Tsukuba. While Ibaraki is officially the number 19 prefecture in Japan in terms of fig sales (Aichi is number one) figs are commonly grown at home- so Ibarakians don`t have to buy them ! The variety grown here is the MASUI-DOPHIN which comproses 80 percent of commercially grown figs in Japan

In keeping with the Japanese emphasis on seasonality in eating,  fresh raw figs are enjoyed by many at least once every autumn. Unlike the way they are in their dried form- rough, overly-chewy, very sweet, and a bit unsightly- when fresh, they are softly textures, delicately- even sublimely flavored, and beautiful to look. When in season in Japan, they are also featured in a wide variety of desserts – in yoghurt – or (in my second favorite way to have figs- my favorite is fresh, right off the tree) – stewed in wine.

What is left over at the end of the season from one`s personal stash of fresh figs can be made into jam. 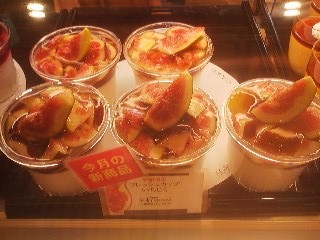 Fresh figs on yoghurt at a supermarket in Tsukuba

Depicted in ancient Egyptian tomb-paintings, mentioned in the bible, a common motif in Greek and Roman mythology, the fig one of the most culturally significant plants in human history and it is believed to be one of the oldest- perhaps THE oldest cultivated crop, having first been systemically grown in the Middle-East. It spread first to Greece,Italy and Persia by the 9th century BC. It took a thousand years to spread from there to the Iberian Peninsula in the west and China in the east ( by sometime in the 9th century AD).

It was not until the17th century, however, that figs were introduced to Japan via China through the port of Nagasaki.

Commercial production of figs did not begin on a large scale here, though, until the early 20th century with the introduction of varieties from the United States. 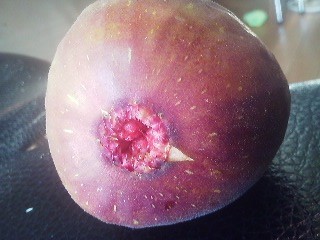 The wasp which pollinate the figs enters through this hole

The Japanese name for figs- ICHIJIKU comes from China- and the same characters that the Chinese use are used to write the name in Japanese 無花果: which means NO FLOWER FRUIT. This gives evidence to a misunderstanding about the fig tree- one that anyone who observed one through its life would make- that it has no flowers. The fact is, though, that fig trees have MANY tiny flowers. They are found inside the fruit that we eat.

Fig trees are pollinated by wasps which enter the figs through a convenient orifice, called an osteole, to do their work.

It is also curious that while for most other fruits, it takes many leaves to produce one fruit, sometime 30-40 leaves per one fruit (for apples, pears, oranges, etc.) the fig tree produces one fruit per leaf (though the leaves are quite large- large enough to cover up your gentlest areas!).

Please do a little searching on your own- the cultural, historical and nutrional significance of the fig is a vast subject.

I would like to get to more pressing matters……….. 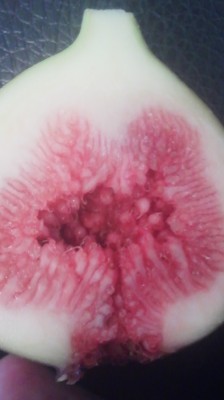 The fig`s flower – I should rather say FLOWERS, are on the inside of what we think of as the fruit- and it is actually the flowers that we eat!

Of course, the true fig-lover eats them fresh and plain- preferably right off the tree. But here is another of enjoying them- and experiencing the season: stewing them in red wine with lemon and sugar !

When still hot, perfect for autumn nights which day by day grow longer and cooler. 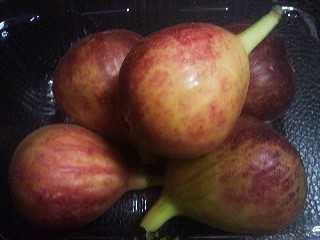 I use five figs to make this dish

Figs – I usually use five

One lemon – of which I use half 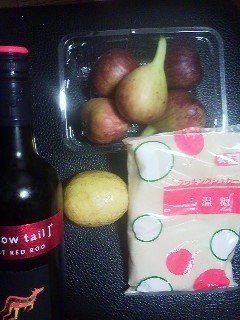 The ingredients are simple and few- figs, red wine, a lemon and Japanese cooking sugar 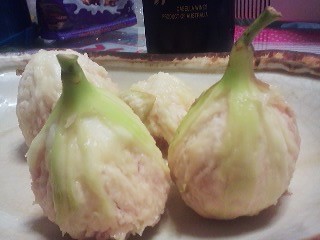 Peel the figs – try to keep the stems on – it makes for better LOOKING results – though you don`t have to worry if theu come off.

After having scrubbed the lemon, cut it in half and then slice one of the halves ito thin slices with the skin intact. 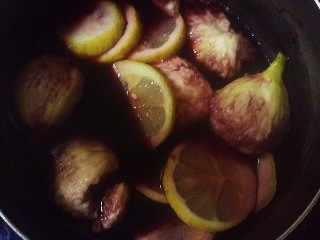 The figs simmering in red wine and sugar with lemon slices 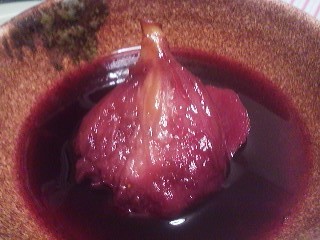 La piece de resistance! October 2014 at my house in Tsukuba

If you`ve got plenty of figs at hand you might also want to try this recipe:

Put 2 peeled figs (stems removed) in a blender with:

Chopped peppermint, a little plain yoghurt, some a squeeze of lemon, and a teaspoon of honey 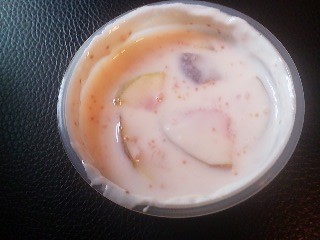 Fresh figs in yoghurt at the Prechef Supermarket`s yoghurt counter 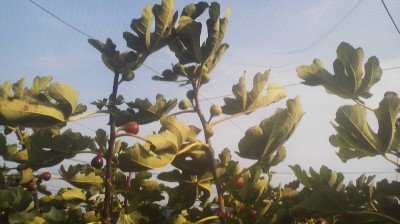 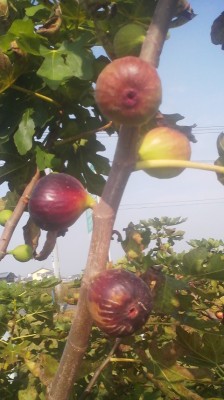