Japan`s Prehistoric Staple Food – The Chestnut ( KURI, 栗), Is One of Tsukuba`s Most Outstanding (and dangerous!) Features- revisited 22 September, 2018 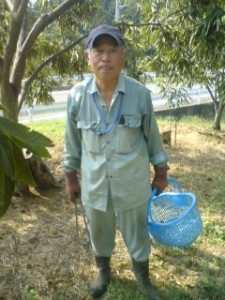 My former neighbor, out early in the morning with boots, bucket and tongs ! 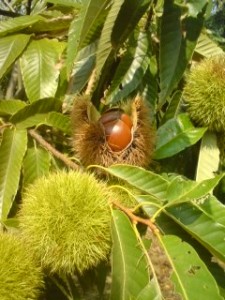 Ripe KURI on the tree in September (Tsukuba, Higashi-Oka)

By Avi Landau
In Tsukuba, early on  September mornings, you are very likely to see farmers who are walking, on bicycle, or emerging from pickup trucks, carrying  metal TONGS. And though the weather is JUST RIGHT for it, these early risers ARE NOT, as you might assume, heading out to get a BARBECUE going. Wearing boots and gloves, and almost always with a plastic basket at their side, they will proceed to use these forceps ( which are usually for moving burning charcoal), for gathering in one of Ibaraki Prefectures most important and delicious crops- chestnuts ( KURI). 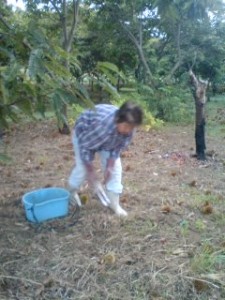 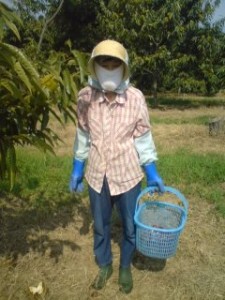 My former neighbor all set for a morning of KURI gathering! 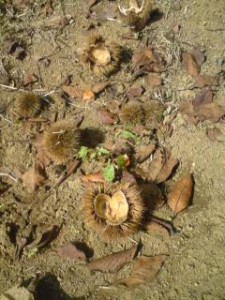 The spiny casings left over after the chestnuts have been picked out of them. 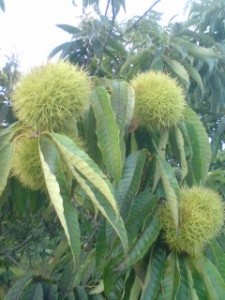 Like arboreal sea urchins, Kuri cling precariously to their tree- if you give them the slight touch they will plummet to the ground 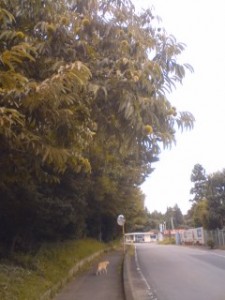 Beware of falling KURI !
Over the centuries, chestnut trees, especially those which bear SHIBAGURI (wild chestnuts) were allowed to grow in Japan`s satoyama (carefully managed woods on hills above villages), as the trees were widely used not only for food but also for timber (making roofing, and other boards for housing, etc). By the end of the 19th century, these trees came to be extremely common. 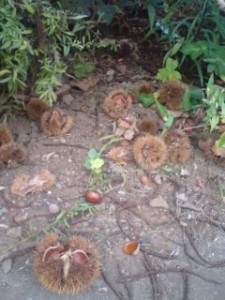 A typical September groundscape in Tsukuba

Then came the railroads, which first started to run in Japan in 1872. After the first line was successfully established between Shimbashi and Yokohama, railway lines were laid down all across the country, in what was a major effort in industrialization which lasted about 60 years (though of course railways continue to be developed and extended today). During the period between 1910 and 1930, 90 percent of the all the rail tracks were put down using the wood of chestnut.  Because of this, by the mid 30`s, not much of this timber remained standing. Thanks to concrete,however, the wild chestnut and other varieties were able to make a huge comeback.
For more on KURI, read my :
http://blog.alientimes.org/2009/06/chestnut-trees-give-tsukuba-its-distinctive-summer-smell/
Enjoy some KURI this autumn ( in one of the many ways the Japanese prepare it, especially KURI GOHAN, chestnut rice) and REMEMBER- look out for those spiky burrs- down below or overhead! 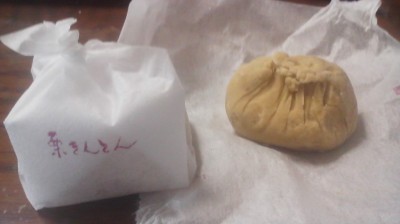 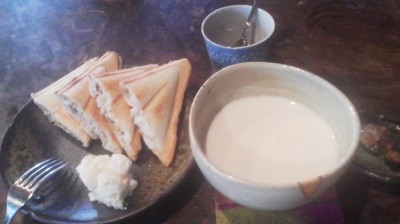