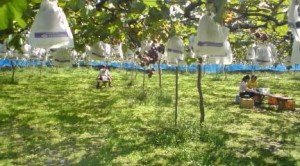 Ibaraki is famous for its fruit, and Chiyoda Town, now part of Kasumigaura City, with its myriad orchards of Japanese pear (nashi), persimmon, grape, and chestnut, is surely the fruitiest place in the prefecture. There are dozens of farms which offer (for a price) various fruit picking options, in addition to plain old fruit shopping (bo-ring!). The town itself and the surrounding countryside also offer several places worth checking out. 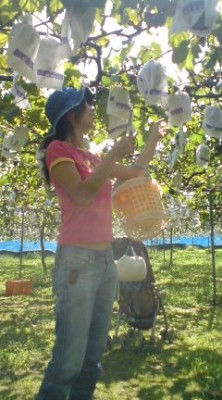 Picking grapes at the Shobei Farm in Chiyoda, Kasumigaura City

Today was a perfect, if slightly hot, autumn day. With a few morning hours to spare, I suggested some pear and grape picking, and a very short hike to commune with some mysterious Kamakura period Buddhist carvings known as the Kankyo-Zan MAGAI BUTSU (磨崖仏). This idea was received with enthusiasm.

From Tsukuba we got onto route 53 (by staying on Nishi-Odori and continuing straight on), going past Oda and heading towards the small mountain, half-eaten away by the ravages of a quarry. We drove past that monstrosity (with windows up, of course) and after a few km on this narrow, truck-filled road, we entered a world of large traditional houses and plenty of greenery. High above, I noticed a soaring hawk. A little further on, the road was lined on both sides with fruit stands and farms offering fruit picking. 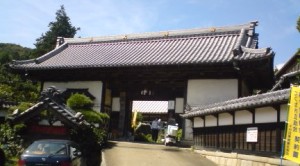 There are MANY orchards to choose from, and making up your mind as to where to stop can put you in a flurry… But if you are making the trip all the way out to Chiyoda, there is ONE place that stands out high above the others, in that it offers a very special physical setting, a spectacular 200 year old house filled with interesting knick-knacks, and nearby historical sites. I’m talking about SHO-BEH KAJU-EN (庄兵衛果樹園).

It’s a little tricky to get there. From Route 53, you turn left at route 64 (県道６４). This road, too, is lined on both sides with fruit picking orchards. You will soon see large signs for Shobeh Kajuen and will eventually turn left. Just to make sure you’d  better check the map on their website. 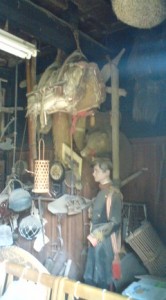 Just having the chance to walk around this neighborhood makes the trip worth it (for me). The gate and main house offer some interesting features and, if you are lucky, the proprietress will show you around. Also, near the house, next to a small shrine, are two rare stone pagodas (important cultural property) and a memorial to the family’s war dead. 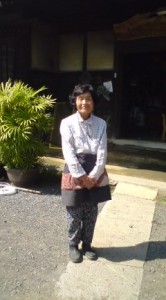 Shobeh’s offers chestnut, persimmon, pear, and grape picking. Today, we opted for grapes — KYOHO, my favorite. After paying a 900 yen per person entrance fee you can enter and eat as much as you like. There is no time limit. I would recommend bringing a picnic lunch and drinks with you. 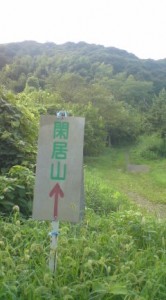 After having our fill, we headed further towards Yasato, where we turned off towards the foot of Mt. Kankyo (閑居山）. Kankyo means TO DWELL IN SECLUSION in Japanese, and according to legend, the great Buddhist Kukai (KOBO DAISHI 774-835), did just that on this mountain, more than 1000 years ago. 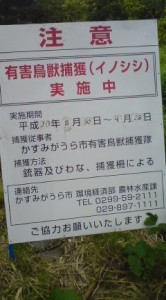 It is now the WILD-BOAR CULLING SEASON, and a sign warned us of hunters with guns and the presence of traps (we saw one at Shobeh’s). We were not going to be climbing very far though, so I suggested we forge on. A ten-minute hike brought us to scores of mysterious Buddha figures carved into rock. Exposed to the elements for centuries, most of them have been badly worn away. Still I find it a good place for a little peaceful contemplation. If you like, you can continue on for further hiking. (The SHOTS you hear are probably not hunters. Farmers use time released fireworks to scare off birds in this area). 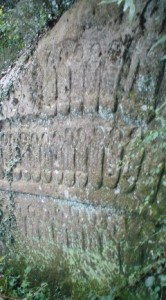 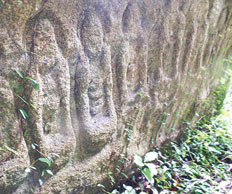 A closer look at some of the rock carvings (百体磨崖仏) found at Mt. Kankyozan in Kasumigaura City

Time was short, so unfortunately we had to rush back to the Science City. I’d like to go back soon, though, and if YOU haven’t been to Chiyoda in autumn, you might want to check it out for yourself.

You can pick pears, grapes, and chestnuts until November and in winter (from the end of December) there is strawberry picking. 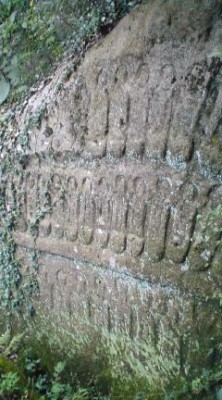 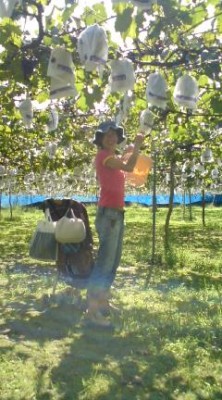