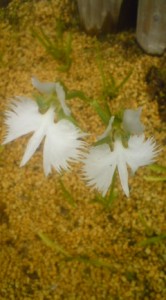 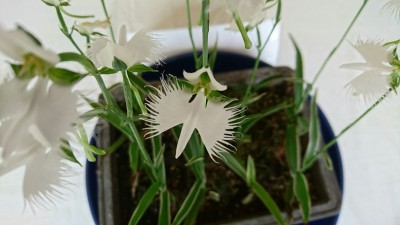 August 29, 2018 – a potted
sagiso plant in bloom – when viewed from above looked just like an egret (after which it is named) in flight. (Yamaguchi, Tsukuba)

One of my favorite everyday experiences in Tsukuba is catching sight of one or more of this areas numerous egrets ( SAGI in Japanese), long-legged and long necked white plumed wading birds, either stalking their prey in the fields or streams or flying elegantly overhead, with their necks tucked in and their long legs trailing behind while their slender wings gracefully propel them across the sky. 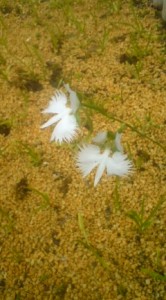 Like beautiful birds soaring in the air- SAGI SO 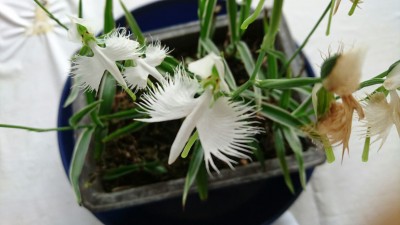 An even more thrilling experience for me, is coming across the flower, which because of the strong resemblance, bears the name of these birds- SAGISO ( literally, egret grass).

The reason that these flowers, which really DO look like richly plumed white birds soaring through the sky ( as seen from above) are so thrilling to come across amid the deep greens of the Japanese summer, is that they have become so RARE.

Until recent decades a usual flower of summer ( and a HAIKU key word indicating the season), readily seen near rice fields and in wet or marshy areas, development and maybe even more so OVERPICKING by flower lovers, has led to its near disappearance from the  wild Japanese flowerscape. 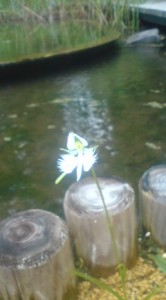 A member of the orchid family, this delightful flower also apparently grows in Korea,Taiwan,China, and the Russian Far-East. Its scientific name is Habenaria radiata, and in English it can be referred to as the fringed orchid, the white egret flower, or by the moniker I prefer- the flying egret orchid. 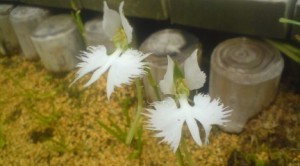 There is a quaint story, still told in the Setagaya Ward of Tokyo ( of which the Sagiso is the official flower) explaning the origin the flower`s egret-like shape.

During the period of civil wars (Sengoku Jidai), a maiden in distress at the old Setagaya Castle sent out a call for help by attaching a message to the foot of an egret. Somewhere during its flight, the unfortuante bird was shot down, pierced by an arrow.

On the spot where it landed, it is said that sagiso sprouted- with petals spread like wings in flight.

Hope that you chance upon this AMAZING little flower, too! 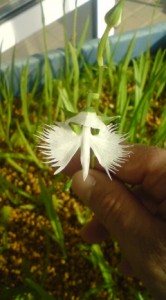 Though very hard to find growing in the wild, many flower lovers in Japan Japan cultivate sagiso (さぎそう) at home! (Tsukuba)