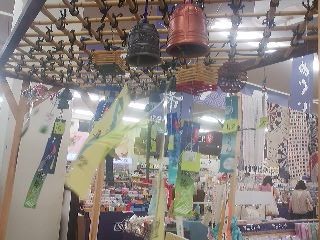 The tingling of Japanese wind-chimes magnifies the effect of a breeze by making it audable. You can find chimes made of glass, wood or iron, each with distinctively different range of sound

Japanese summers are unbearable. More than the heat itself (which is quite formidable), it is the high humidity that makes both the days and the nights so torturous. Even for those with modern air-conditioners ( and those who can afford to keep them running for long hours each month), it can be very uncomfortable – and hard to get a good night’s sleep.

imagine then what it must have been like in generations past, when there were no air-conditioners, electric fans or refrigerators. It took plenty of ingenuity over the centuries to device ways of keeping the people cool – or to imagine that they were cool!

In fact, Japan”s distinctive traditional architecture evolved with the problem of keeping cool in summer ( and not keeping warm in the frosty winters) in mind ! This is reflected in an oft quoted passage from the 14th century collection of essays by the priest KENKO (1283-1350), entitled TZUREZUREGUSA (translated as Essays in Idleness):

“A house should be built with summer in mind. In winter it is possible to live anywhere, but a badly made house is unbearable when it gets hot. (Translation by Donald Keene).

What are the features which help keep traditional Japanese homes cool? Well, it is mostly the good ventillation afforded by the high ceilings when all the sliding door (SHOJI and FUSUMA) are removed.

I was lucky enough to have lived for a while in a reconstructed old farm house. I spent the summers in the traditional way without air-conditioner or fan. Putting some wicker chairs out on the ENGAWA veranda where I would sit with a handheld fan, plenty of cold barley tea, chilled watermelon or cucumbers, cold somen noodles for lunch, and an occassional bowl of shaved ice.

And last but not least, I have to mention on more indispenable source of soothing summer relief – wind-chimes ! I have a nice collection that I’ve built up over the years, some made of glass, some from wood or plastic- and my favorite: those made from Nambu ironware (in Iwate Prefecture.

They are usually designed so that they produce various tones as they are struck by the occassional breeze- and the effect can be truly helpful in the heat – as the mind the cool and an enormously vast sky.

The sad thing is though, that when I moved to a more MODERN residential neighborhood I realized that for many in Japan now, these essential elements of summer ( for the past 500 years or so) have now come to be considered a noisy nuisance.

So make sure your neighbors approve when you are thinking of hanging some up. 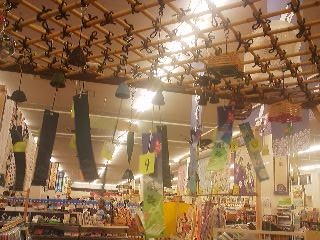 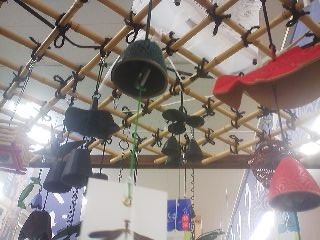