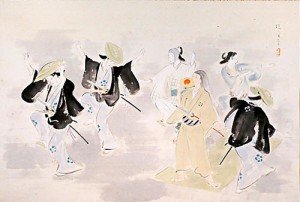 Yesterday evening ( Aug. 13th), families all over Japan went to cemeteries with paper lanterns to greet and guide their ancestral spirits back home for what is called the O-Bon Festival. During their short stay with their This-Worldly families, the ancestors will be wined and dined with various offerings, AND entertained as well. This has traditionally been done in the form of Bon Odori ( Bon Dances), in which men, women and children ( of all ages), usually dressed in YUKATA ( cotton kimonos), dance either in lines or in a circle ( depending on the area).

Having apparently first developed sometime during the  Heian Period (794-1185), and later popularized by Ippen Shonin (一遍上人) in the Kamakura Period (1185-1333), these dances ,which eventually came to be performed in various forms all over Japan, had until recently had a purely religious significance (expressing  joy and thanks to the ancestral spirits). 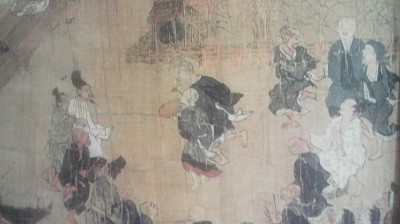 A detail from an old picture scroll detailing the life of the Buddhist Priest Ippen Shonin. The dancing which can be seen here, the Nembutsu Odori popularized by Ippen, is said to be the ancestor of today`s Bon Odori

These days, however, if they have survived in a particular area at all, Bon Dances have often become major events and tourist attractions- in fact, Tokushima Prefecture`s Awa Odori Bon Dances ( in which thousands of costumed dancers parade through the streets) are probably what that prefecture is most famous for! See here: http://www.city.tokushima.tokushima.jp/english/awaodori.html

Even when they occur on a smaller scale these events can be lots of fun as community gatherings ( while in some areas, they still do retain plenty of solemnty and mystery).

This evening at various locations in Tsukuba and across Japan( except for Tokyo and Yokohoma where Obon is held in July) there will be Bon Dancing events. 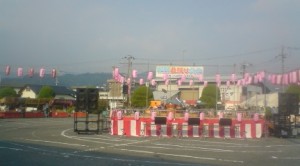 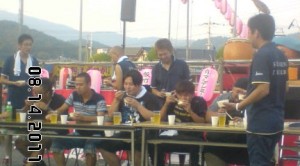 The festivities began with a surpring event- a tofu eating contest! The winner ate nine packets in 5 minutes! 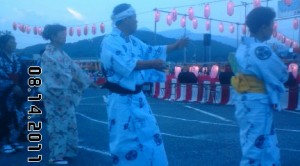 At dusk, the dancing began- the dancers looked like SPIRITS themselves, gliding elegantly around the YAGURA stage with hands fluttering elegantly 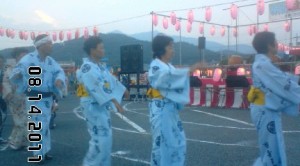 As time passed, more people joined in the circle 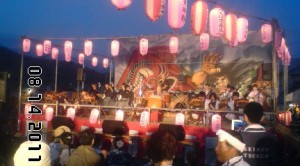 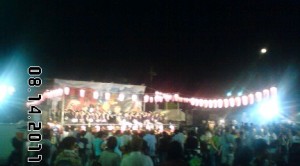 A nearly full moon added the perfect touch in the background 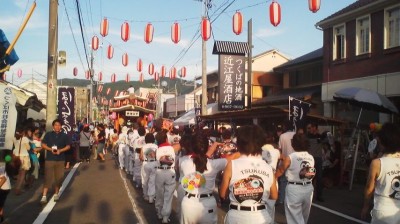 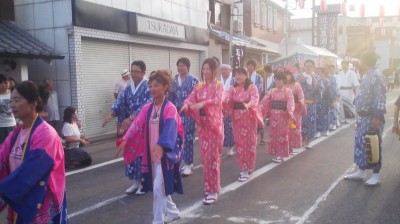 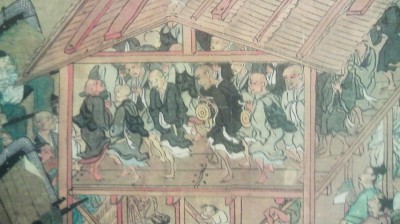