At Last, a Visit to Onozaki`s Suwa Jinja- to learn its name and ask about its annual prayer meeting- NOT to rob the offerings box! (on the day of its annual festival – August 27th 27 August, 2018 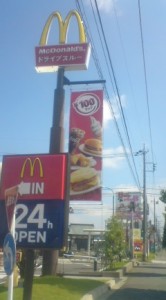 There is a curious little Shinto Shrine which sits a few hundred meters from the TX Tsukuba Terminal, along one of Tsukuba`s busiest and most important thoroughfares- the Tsukuba-Gakuen Line.

I call it curious because to me it has long stood out among all the other shrines in Tsukuba-  for two reasons. First, it is located right beside a McDonalds outlet, making the scene of both, side by side ( torii gate and Golden Arches), an interesting montage of The Old  and The New, as they co-exist in Japan ( or anywhere else in the world, for that matter). Adding to the atmoshphere is a Buddhist Temple ( of the Nichiren Sect), called Myoho-Ji (妙法寺), just next to the shrine.

Second, the shrine is oustanding in its BLANDNESS- a  torii gate of concrete, a dull colored, featureless hall, and most strikingly unshrinelike – grounds which are so devoid of  trees and greenery ( even in summer) that they must surely be treated regularly with some sort of defoliant.

Furthermore, the shrine had always remained anonymous to me, as there is no visible sign in or around its precincts to indicate its name or what kind of shrine it is ( by that I mean dedicated to what god or gods?).

And since throughout all the years I have lived in Tsukuba, passing this spot almost every day in the process, I had never seen ANYONE to ask, no sign of anyone worshipping or making offerings there, or even anyone standing within its concrete-block-wall enclosed grounds, – the identity of this shrine had long remained a mystery to me- until Saturday ( Aug. 27th 2011), that is! 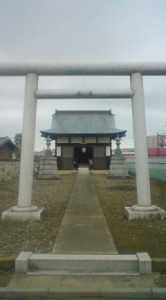 Here is the story of my long awaited encounter with the shrine- which I had always thought of as the McDonalds` Shrine, but now know to be Onozaki`s`s Suwa Jinja Shrine (つくば市小野崎の諏訪神社).

It was  the morning of the Matsuri Tsukuba Festival, and I set out from my home in Hojo at about 7 AM. You see, living in an old village near the foot of Mt Tsukuba carries with it some disadvantages- one of them being the great difficulty involved in getting connected to the internet. And since I wanted to make some early additions to Tsukublog, I had to get to an internet cafe.

Making my way through the narrow lanes on the way to the bus stop, something happened which forshadowed what I would experience a little later in the morning.

As I was passing a row of houses, a woman, walking her bicycle up to her front gate, seemed to be getting ready to go out. As our eyes met, I gave out a hearty OHAYO GOZAIMASU ( good morning!). Though she responded with the same, noticing that I was a foreigner ( or just an unfamiliar male, in general), she tagged on an `Oh, I forgot ( aa wasureta)’  to her greeting, and immediately hurried back to her front door-  to lock it. 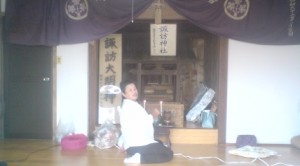 Making offerings at the shrines once a year ceremony ( held on Aug. 27th)

With no hard feelings, I walked on to the bus stop, and in about 30 minutes was at Tsukuba Center.

The place was buzzing, and not just from the cicadas. There was all sorts of activity, as final preparations were being made for Tsukuba`s biggest festival ( which would begin at noon).

I was planning to walk over to the little internet cafe on the Tsuchiura-Gakuen Line which is just next to the Mos burger ( a Japanese fast food chain), but to my dismay, after having made it over to there, I found that it would not open till nine. I had more than 30 minutes to kill.

I decided to get a cup of coffee at McDonalds. I could get some cafeine into my system and do a little reading as well, I thought. Sitting down with my extremely hot beverage at a window seat, I was stunned to see some activity stirring at the little shrine across the road. The hall was actually open and some people had gathered inside and out in front.

I threw my nearly full cup into the trash and rushed over.

A handful of  older women were getting ready for a prayer meeting of some sort. Peering inside, I noticed some banners reading SUWA DAIMYOJIN, and I realized ( after many years of being in the dark) that this was a branch shrine of the Suwa Taisha ( in Nagano Prefecture), one of the most popular types of shrine in Japan.

I said hello, and the women greeted me cordially. I told them that I had always wanted to know about the shrine and the ladies told me all that they could- which actually wasnt very much. The main gist was that they held a  meeting once a year ( on Aug. 27th) and prayed for their families` health and safety. They called it a Mando-Sai, which made me think that the shrine was once connected to a temple- perhaps the one one right next door ( made of similar materials and in similar colors). When I asked if this this were the case, the women dont me it was not ( though since shrines were separated from temples in the 1870`s these women would probably not know it even if the shrine and the temple next door HAD once been one and the same).

I continued to ask questions.

While most of the women were enthusiatically explaining all they knew about their shrine to me, one of the women, started paying attention to something else- the offerings box. She was tying to get it all cleared out, and taking a long time doing it. She was also vocalizing, or should I say narrating to the others, and to me, what she was doing- making sure the box was empty.

I then realized ( though some of you might think that Im just being paranoid), that this one woman was worried that this strange man ( me), dressed in shorts, t-shirt and thongs, hovering around their shrine, was targeting the donation money in the offerings box. She wanted me to know that there was NOTHING TO BE TAKEN.

Sensing that this was the case ( since I have been to many such gathering and had never seen anyone taking care of the offerings while the ceremonies were just beginning), and with the other women starting to get stressed out by what she was doing- I felt it was best that I take my leave, and did so with a friendly ‘ Thank you ‘, and went on my way, leaving them to enjoy their ceremony in peace. 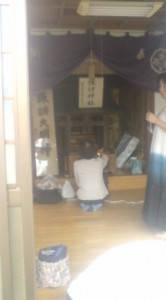 Walking back towards the internet cafe ( where I would begin this post), I thought about Suwa Shrines and WHY this shrine would have their prayer meeting at the end of August.

The Suwa Grand Shrine ( Suwa Taisha, 諏訪大社), of which the little shrine in Onozaki is a branch of, is located in Nagano Prefecture, and is unique in that it is separated into TWO impressive structures with several kilometers of water ( Lake Suwa) between. One of these is the Spring Hall ( Haru Miya, 春宮) and the other the Autumn Hall (Aki Miya, 秋宮).

Over the long history of this shrine, what people have prayed for there has changed. First a shrine of hunting, then agriculture, then military victory, it is now a popular place to pray for good harvests, traffic safety and good luck in general.

There is something else, however, connected with the Suwa Shrine, that I think might be why the locals of Tsukuba`s Onozaki, gather at their little hall in late August- TYPHOONS!

Yes, the Suwa Shrine has long been a place to pray for protection from the typhoons which often bring havoc to this archipelago in late August and early September.

In fact, there was a typhoon headed for Tsukuba that very day.

Though the ladies in Onozaki have no collective memory of why they meet at the time of year that they do, I feel that it must be this.

Anyway, when your munching away on your Big Mac at the Onozaki outlet of the popular fast food chain, dont forget to glance over at the curious ( but now identified) shrine.