Images of Japanese Summer- UCHIMIZU (打ち水) and other forms of sprinkled water (plus some places for the kids to cool off at in Tsukuba) 23 July, 2018 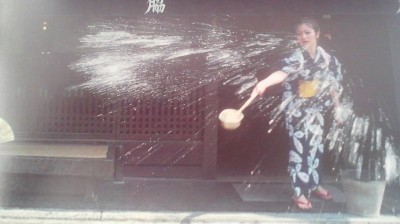 In summer in Japan it is common for shop-keepers to sprinkle some water on the road out in front of their establishments- usually in the evenings, but also possibly in the morning. This custom, called MIZU UCHI or MIZU MAKI, can also be witnessed at temples, shrines and in front of private homes. The Meteorological Agency has announced that the rainy season is over in the Kanto Region as of today (July 22, 2014) so you should be season plenty of Mizu Uchi over the next month of insane heat and humidity

Water does not only sustain life- it cools, cleanses, soothes, heals and refreshes (among other things!). In Japan, water has also long been important for spiritual and ritual purification ( you can see the water basins at which one should cleanse one`s hands and mouth at  before approaching a Shinto Shrine).

On summer evenings ( and sometimes mornings, as well) you might be lucky enough to see a Japanese shopkeeper splash water out onto the road or sidewalk in front his/her establishment. You might also see the same thing done in front of private homes or at shrines or temples.

Besides the fact that this could help keep the dust down and that the mere sight of water can help us feel cooler, this splashing is also carried out as a ritual act of purification similar to the laying of little salt piles (MORIJIO) at entranceways (which I have written about before).

When done at homes, this water tossing ( which in Japanese can be called either MIZU UCHI or MIZU MAKI) can almost be seen as a kind of prayer for cooler temperatures . For whatever it is worth, the little splash must also help out the few plants and flowers lucky to by touched by it.

Once I talked to a woman in the old town of  Hojo. I had noticed her splashing a big ladle-full of water in front of the gate to her house. . I talked to her about what she was doing and I was interested to hear how it was the fact that the sun was starting to go down that signalled the time to start UCHI MIZU. The idea is to help out the cooling-down process. In the heat of the day, throwing water would only make things steamier, she explained.

(this also reminded me of how in the 19th century when the first steam engines started to run in Japan, villagers would kindly toss buckets of water onto what they considered to be the poor overheated steel beasts)

In past years at August Bon Odori event held in that same town, I have noticed the shopkeepers and those helping run the festivities regularly tossing water in front of the shops and the resting areas- as an invitation to a cool and PURIFIED zone. 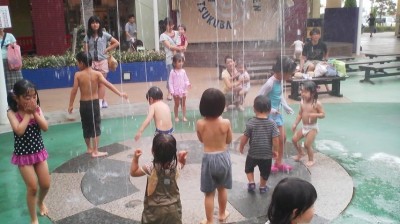 Sprayed water is now commonly used in Japan to keep the kids cool, and anyone who is staying in Tsukuba through August with small children should probably take advantage (at least once) of these free play fountains (reminding me of the the fire hydrants which are opened in some parts of New York City in the summer). 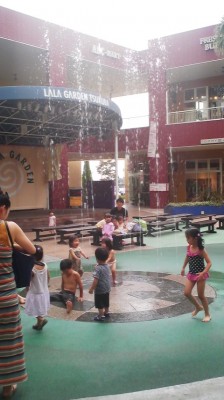 The sprinkler at Lala Garden

Let me tell you of two good places that I know of for the tots to cool off ( and have lots of fun, as well)-

one at the Lala Garden Shopping Center, at which water is occassionally shot up into the air.

and the other, much more recommended at the southern end of the Matsushiro Park, where all day, cool , clean water is let to flow and sprinkle- much to the delight of all the children who go there.

Beware , however, that for most of the day this area is exposed to direct sunshine. So while your kids might be having the the times of their lives, their mom or dad might have their life threatened by heatstroke! Of course, I am exaggerating, but if you do go to the KUMA-CHAN pool, as it is called, do come prepared- with sunscreen, drinks, hat, etc. 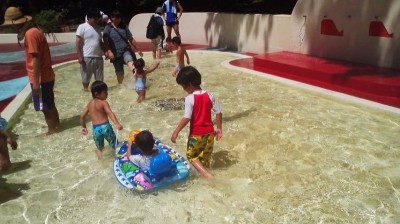 Cool water flows freely at the Kuma-Chan Kiddy pool in Matsushiro, Tsukuba- open everyday through the end of August

And as you are watching your kids vigilantly, making sure they don`t run or slip or fight, you might like me start wishing that you didn`t have to be acting like an adult at that moment, and that you too could get yourself all wet and cooled off . Then like the kids we would be shouting with thrilled glee (instead of grumbling with the impatience of the overheated). 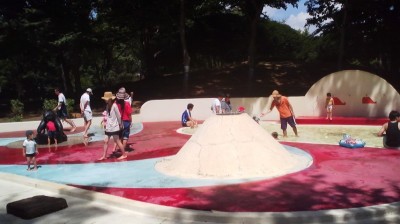 Cooling waters even flow down the slopes of a mini Mt Fuji at the Kuma-Chan pool in Matsushiro (its free!) 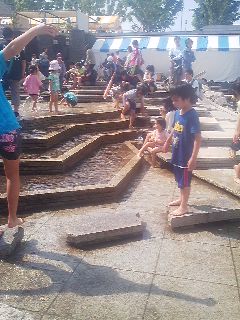 If you are with your kids at Tsukuba Center you might find it impossible to tear them away from the artificial stream- somehow they can enjoy fooling around in the water for hours!

I have written about the little salt piles found at the entrances to certain homes, restaurants etc, here: