The Nemu no Ki (silk tree) and Aomori`s Nebuta Matsuri Festival- a connection between one of Japan`s spectacular blossoming trees and its GREATEST summer festival ( which begins Aug. 1st) 28 June, 2018 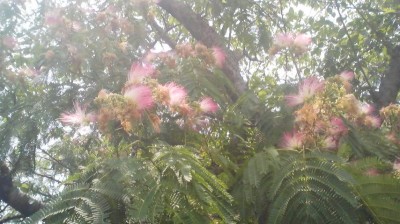 A silk tree (NEMU NO KI) in bloom in Hojo, Tsukuba 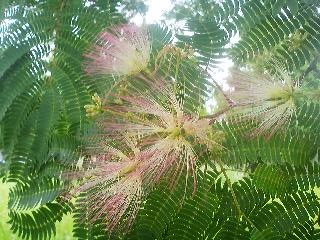 When the tree which the Japanese call the NEMU NO KI ( ねむの木 or 合歓木）blooms in June and July, it distinguishes itself as being one of Japans most spectacular and curious trees of ANY season. In fact, the first time I encountered one of these trees, one summer many years ago, it stopped me in my tracks. To be more specific, it made me bring my bicycle to a sudden and unconscious stop, as it loomed before me with its strangely delicate flowers, like silky pink needles, appearing like little puffs of colored smoke, floating in the tree. I stood mesmerized.

What makes the NEMU NO KI even more interesting, is the fact that while its flowers are in bloom, each night its leaves fold up and its branches slump down, giving it the appearance of being asleep. Naturally, since ancient times humans have found this unique characteristic surprising ( even today, scientists are not exactly sure of why this tree does this!) and thus, in the places in which the tree has traditionally been found, the names it has been called by reflect this behaviour. 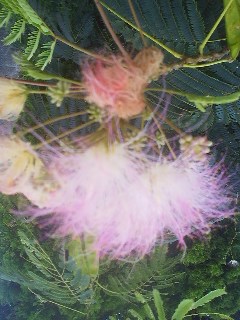 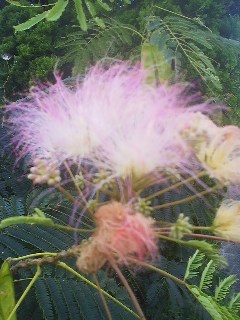 The Chinese characters used to represent it are 合歓木, which put together mean: to greet someone by bringing the hands together ( as the people of Thailand do) – which is what the leaves look like they are doing when they fold up.

In modern Japanese , NEMU NO KI is the name most commonly used for this tree, but in former days NEBU NO KI, NEBURI NO KI or NEMURI NO KI were used. These all mean the same thing- THE SLEEPING TREE, when directly translated.

In English, however, the Nemu tree is often called the silk tree, because of its silky flowers, or the Persian silk tree, since it was introduced to Europe in the 1700`s from Persia by the Italian Filippo del Albizzi ( which explains the scientific name Albrizia julibrissin).

The Iranians call the tree Shabskhosb, which means- THE NIGHT SLEEPER. 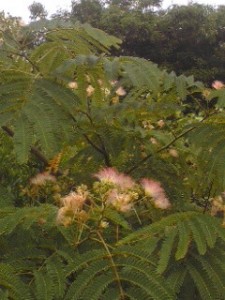 A silk tree (nemu no ki) in bloom in Tsukuba

Now because of this SLEEP-LIKE behaviour, and its name ( formerly NEBU NO KI), the Japanese of old, used the leaves of this tree in a once common SUMMER RITUAL which was meant to drive away the SLEEPINESS ( NEMUKE 眠気) brought on by Japan`s hot season. This often took place on the morning of Tanabata ( the 7th day of the seventh month on the old calendar) and was called Nemuri Nagashi or NEBUTA NAGASHI ( literally- washing away sleepiness). What happened was that when one woke up on the morning of the ritual, one rubbed the leaves of the nemu tree on ones eyes, symbolically wiping away fatigue. These same leaves were then tossed into a stream or river to be carried away, along with the bad energies which had been wiped away and absorbed.

Over the years this ritual developed into much more elaborate summer festivals which were celebrated with the intention of reviving the people energies during th hot and LAZY season.

In many parts of North-Eastern Japan these festivals are still celebrated, with the most famous being the NEBUTA FESTIVAL of Aomori City. With tremendous crowds going wild and its huge lanterns representing heroes of yore, this festival is one of the great annual events IN THE WORLD.

And yes, it all started with the NEMURI NAGASHI OR NEBUTA NAGASHI in which the leaves of the nemu tree were used to remove summer lethergy.

DO NOT IMAGINE however, that Japanese people you might mention this to will be aware of this, since besides the name NEBUTA itself, the only remaining vestiges of the NEMU trees in the festival today appear to me to be the red feather-like decorations found on many of the festival`s hats and in the general color of the whole event itself- red.

Coincidentally ( and strangely), Tsukuba City has adopted the Nebuta festival as its own for the Tsukuba Matsuri.

I have written more about that here:
http://blog.alientimes.org/2009/08/tsukubas-very-own-nebuta-parade-revisited/ 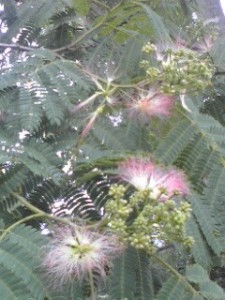 Another NEMU NO KI (silk tree) in bloom in Tsukuba

Many interested in Japanese culture, especially in Haiku poetry, might have heard about the beauty and behaviour of the NEMU TREE without actually ever having seen one of the trees in real life ( this had been the case with me as well),

The reason for this is that besides there being numerous fine poems which use the tree as a keyword for summer, one of the more famous haikus by THE most well-known of haiku poets- MATSUO BASHO, features the NEMU. It was composed while the master was on his great journey on the Long and Narrow Road to the North with his disciple SORA. In 1689 they were staying at the town of Kisakata (象潟) in what is now Akita Prefecture.
(At that time Kisakata was one of the places in Japan most famous for scenic beauty, specifically, the view of the small islands which lay just off shore. Many of Japan`s pre-modern literati and other great men visited there to enjoy the landscape and many left outstanding works reflecting their impressions. Amazingly, though, in 18o4, a huge earthquake destroyed all this scenery as the sea around the islands disappeared leaving them as mere hills on a plain!. Read more about Basho`s stay in Kisakata here:

http://akitahaiku.wordpress.com/2009/09/
On a rainy day, spying a nemu tree Basho wrote:
象潟や雨に西施がねぶの花
Kisakata ya ameni Seishi ga nebu no hana
which I will translate as:

In the rain at kisakata
I see Seishi, the great Chinese beauty of yore
in the flowers of the NEMU TREE.

Keep your eyes open for these trees. Im sure you will spot some, especially in Japan`s older neighborhoods. When you do find one I would not be surprised if you forget about YOUR summer lethargy ( natsu batte). 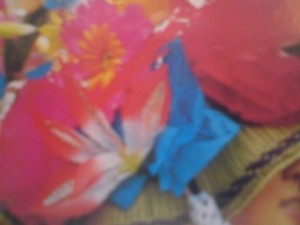 For more on great men who have visited Kisakata ( in Japanese) check out this site:
http://www10.plala.or.jp/tokuda_shusei/kisakata/kisakata.htm 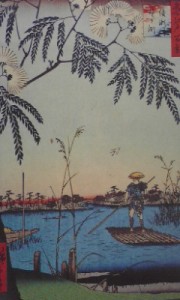 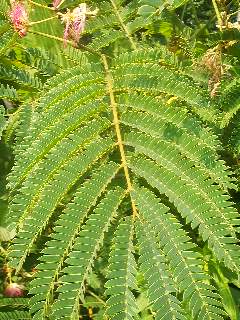