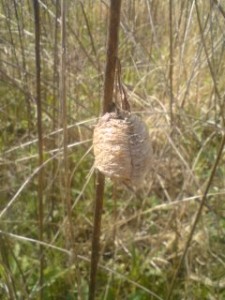 Praying Mantis Egg Case in a field in Konda, Tsukuba 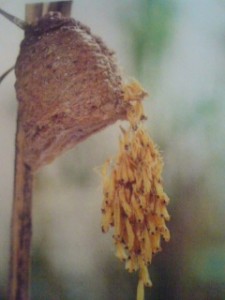 On June 1, 2018 baby praying mantises were observed emerging from their egg-cases all over Tsukuba

It has been a long wait- but well worth it. Today I we were finally able to observe the baby praying manitses come pouring out of their egg-cases, and then set off on their own to make their way in the world.

In Tsukuba`s wild open fields of early summer, many of last years reeds, stalks and grasses still stand tall, though a percentage of them are leaning at acute angles or have toppled over altogether . No matter what their posture might be, these dried out plants have long turned straw color, gray or dark brown. 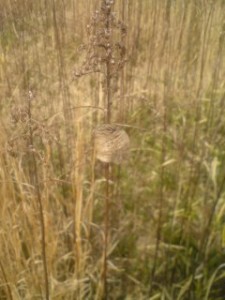 When my dog and I set out across these areas on our twice daily walks, it is difficult to negotiate our way through unless we stick to the intricate network of well-worn trails which have been created by the small mammals (rabbit, weasel, tanuki, etc) and ground birds ( pheasants and partridges) which live there. (This always gets me to thinking about how conservative all creatures are, always sticking to the usual paths and patterns. Not only in movement, but in thought and language, as well.) 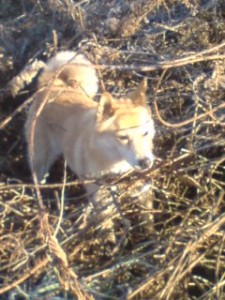 My dog trapped among the dried out vegetation

With all of the dead vegetation spread over these areas, the freshly sprouting  new greenery must push its way out from under. When I stand still (or sit ) for a while in the midst of this, I can distinctly hear the creaking and crackling  of this growth.

One thing I cant help but notice on these walks among the dull colored brush is the abundance of praying mantis egg cases ( kamakiri no ran no, 蟷螂の卵のう), which are stuck like brown tumorous growths at various points up the dried out  reeds ( in the snowy parts of Japan it is believed that the height at which these egg cases are set in autumn will predict the amount of snow which will fall in the coming winter). They literally line the paths along which we walk. 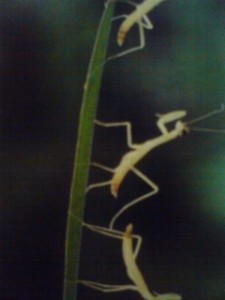 The female praying mantis emits a dab of foam at an appropriate place and then lays her eggs in it. This then hardens to become the case which will protect the eggs until the larvae are ready to emerge sometime in May or June.There are hundreds of babies in each case, though only a handful from each case will survive to adulthood ( that is why there are so many cases around!).

Since I dont use pesticides in my garden, I always break off a few reeds with the egg cases on them and brink them home. There I hope the mantises will eat plenty of bugs. Its also exciting to witness ( in lucky years) the babies emerging.

I must say, however, that actually seeing the mantises of any age feeding , with their strong scissor- like arms firmly grasping their prey, and their tiny mouths  slowly munching it to death is a gruesome, haunting sight.

In many parts of Japan it was traditionally believed that praying mantises could help get rid of moles and other unwanted skin growths. It was not that the insects arms were actually used to slice away at the flesh, but it was a symbolic application to the afflicted spot which people believed would help make the problem spots disappear. 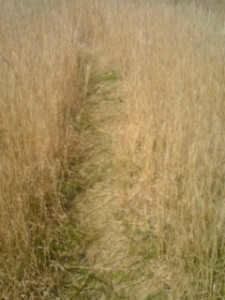 Trail blazed by small mammals in a field in Konda, Tsukuba