Amorphophallus titanium now Blooming in Tsukuba! Do Not Miss the Very Rare Chance ot SEEING and SMELLING this Immense Flower! ( blooms for 3 days only!) 28 June, 2018 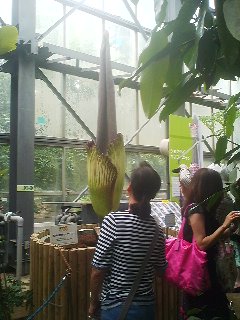 Native to the Indonesian Island of Sumatra Amorphophallus titanium – can ralely be seen blooming anywhere in the world. A specimen at the Tsukuba Botanical Garden has started to bloom- on June 26th  2018- and should open tonight. That means the blooming flower can probably be seen over the next tree days 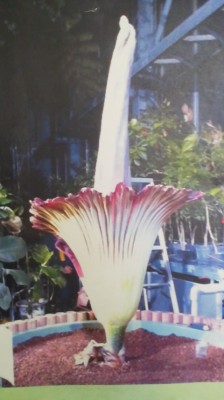 Though it is rarely seen open like this anywhere in the world, we are quite lucky here in Tsukuba. The last time this flower bloomed in Tsukuba was only two year ago ! This photo was taken on May 25th 2012 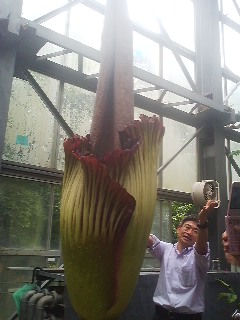 UPDATE! Apparently the flower opened on the night of June 26th at approximately 11:00 PM. By morning ,however, it had already started closing up. By the time I got there (at about 3 PM on the 27th,It did not look much different than it had the previous afternoon. Disappointing after the long crowded wait in the humid greenhouse. The smell it gave off, like bad dog-breath, was overwhelming- never to be forgotten!

I try to visit the Botanical Garden in Tsukuba at least twice a month. There I can conveniently keep up with the continuous succession of bloomings, fruit bearings and witherings of Japanese plants- some unusual- but mostly the mundane.

There are times, however, when the regional media descends upon the garden for an extra special blossoming.   Today, June 27, 2018, was such a day. A specimen of the giant Amorphophallus titanus (the tallest flower in the world) – which if I have not forgotten my  Latin means SHAPELESS PHALLUS OF STEEL !- is just about to open and should burst into bloom tonight- after the garden has closed- releasing its unusually odorous perfume (which has evolved to attract insects). 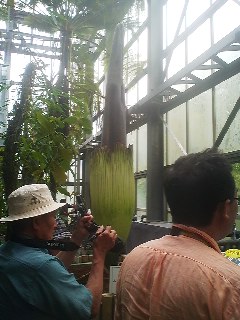 Amorphophallus titanium on June 27, 2018 specialist at the Tsukuba Botanical say the huge flower will about late tonight *after opening hours ( but can probably be viewed for the next three days -its usual blooming period

But since the Japanese are, generally speaking, a great plant and flower loving people, you can expect rock-star-appearance type crowds from tomorrow- so if you would like to see- and smell this amazing flower, you had better get there early- OR TAKE THE DAY OFF!

Even today there was a hum of excitement as throngs of people- of all ages- had gathered, anticipating the GRAND OPENING.

The Japanese name for this rare tropical plant is SHOKUDAI O-KONYAKU. It is a type of tuber plant, and according to the explanation signboard posted by staff this flowers “potato” weighs more than 70 kg!

And because there is a popular food in Japan called KONNYAKU (also made from a tuber), you can hear Japanese visitors murmuring the same question you often hear ringing out at aquariums in Japan: “Can you eat it?” 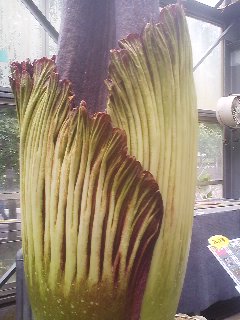 A close-up of the still unopened petals

The gardens one year pass is one of the great bargains in Japan. For a mere 1,000 Yen you can spend the whole day there everyday of the year- except Mondays- for FREE. The price of a single adult admission without the pass, however, is 300 Yen. 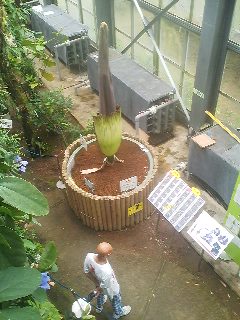 A view from above

Here is a link to its English language web-site: 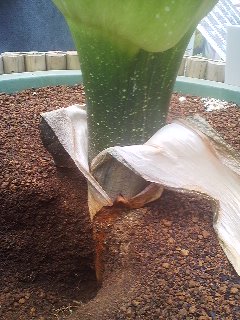 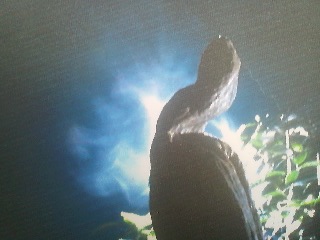 A photo taken with a heat sensing camera shows that the flower will be opening soon! 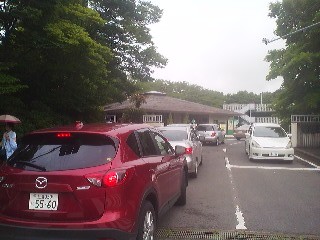 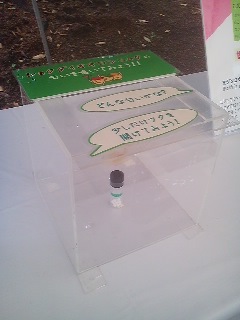 Since the unique (and foul) odor given off by the flower cannot be smelled consistently, the garden staff has set up this sniffing box which supposedly simulates the flowers smell. I think that it is quite off the mark. though, smelling like gas in the kitchen. The flower itself smells much more like BAD DOG-BREATH 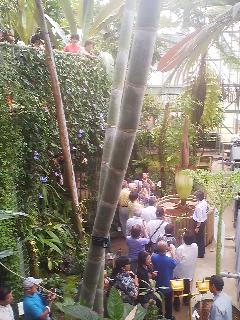 There was about a 30 minute wait inside the steamy green-house- not very comfortable! 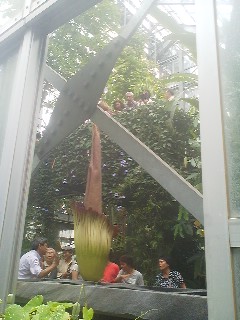 Here is a shot I snick from outside the greenhouse 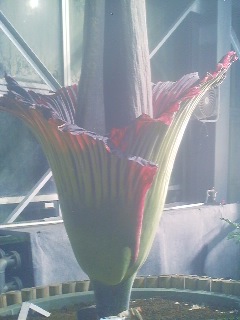 The widest opening achieved with the 2014 bloomimg 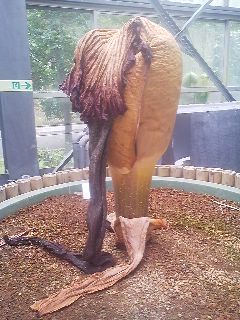 Oh, the vanity of all things!  The huge flowers collapsed after its 2014 blooming