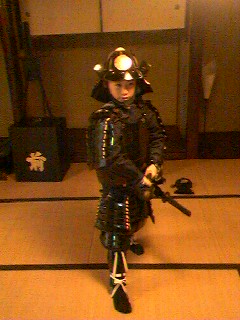 Friday May 5th will be Children’s Day (kodomo no hi). My family likes to celebrate the festival to the fullest, eating chimaki and kashiwamochi and displaying our go-gatsu ningyo dolls and carp streamers (see my previous article for details).

What has made our holiday extra-special in the past, though, has been a day trip to Sakura （佐倉）, a small city about 90 minutes from Tsukuba by car, in Chiba prefecture. I  like going there at any time of the year for its excellent National History Museum (great permanent exhibition and fun gift shop) which I can never get enough of, and its serene, season- displaying park on the site of its castle ruins (the second to last ruler of the castle, Hotta Masayoshi, was a very important advocate of Westernization and Western learning (English and Dutch languages, as well as Western medicine), which lead to the creation of the expression, “Nagasaki in the West and Sakura in the East”!). On Tango no Sekku ( Children`s Day), however, there is always a special event held which is too good to pass up .

The castle which when still standing was unique in the fact that it had no stone wall- only steep earthen embankments surrounded by dry moats, was first built by Doi Toshikatsu, one of the Edo Period`s most important officials and shogunal advisors. After Doi was given a new domain in Koga ( in western Ibaraki Prefecture) the castle, of extreme strategic importance vis a vis its proximity to Edo, was then put under the care of a succession of different families until the Meiji Restoration of 1868.

Now none of the former castles structures remains standing, but the grounds have been made into a pleasant park- just next to the National History Museum

In Sakura there are 3 excellently preserved samurai residences (bookeh yashiki, 武家屋敷) each of different design and dimension, reflecting the previous owners rank in the strict warrior hierarchy of the Edo Period.

The three houses are the Kawahara House (旧河原家住宅), the Tajima House (旧但馬家住宅), and the Takei House (旧武居家住宅) -in order of rank for high to low. It is  rare to be able to compare such houses so conveniently- lined up three in a row

On May fifth, there is an event in which traditional soup is served and anyone who would like to can be dressed up in traditional armor. Each person is help to dress by 3 kimono-clad attendants! 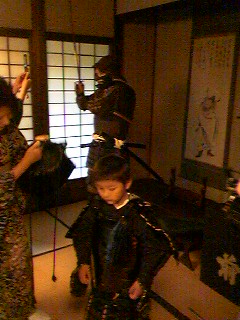 The armor is a bit heavy, though you don’t realize it until you take it off.

It is not a very well publicized event and only about 30 lucky people showed up on that day.

The atmosphere is truly festive and the staff very kind, helpful and patient.

In the past we have received free Polaroid snapshots (I didn’t even know those cameras were still around!) of ourselves dressed
in full samurai regalia!

In Sakura It is also interesting to see the old High School building, which is an amazing early Showa edifice. The baseball super-legend Nagashima attended that school.

Nearby we could also stop by for some bird-watching at Lake Inba (Inba Numa).