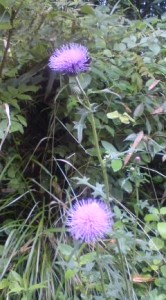 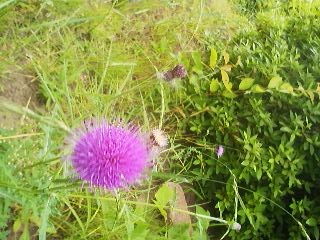 A thistle in Hojo, Tsukuba in May

There are about a hundred types of AZAMI (thistle) in Japan,  and as you can imagine, it is not an easy task to identify any particular one of them out of this great number. However, only one AZAMI can be found blooming at this time of year ( spring and early summer)- the NO-AZAMI (cirsium japonicum), which grows on AZE-MICHI ( 畦道, the paths around rice fields), on riverbanks, and along country roads. On gray, misty rainy season days, their  flowers seem to GLOW purple, atop their tall ( 60-100cm) stems. By mid-June, however, the no-azami`s spine-like petals start to fall away, only to be replaced by a dandelion-like FUZZ. 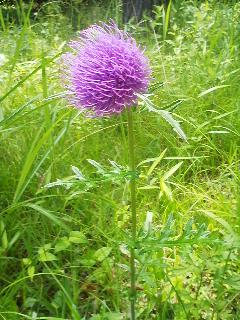 Along Nishi O-Dori in Tsukuba 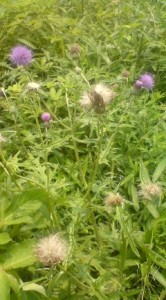 Like most thistles, no-azami are EDIBLE, though this variety might not be the most delicious (this allocade probably goes to the MORI-AZAMI, which blooms in autumn in Nagano, Gifu and Shimane Pefectures where it is actually cultivated for consumption!). You can eat the young leaves, stems and roots of this thorny plant, but be careful while picking them. Be sure to use gloves and scissors ! Snip off the thorns at the edge of the leaves, skin the stems. The leaves ( young leaves are best) can be used for tempura, and the stems boiled and seasoned as you like. The roots, if you have the patience to dig them up, can be boiled, too. They taste like GOBO (burdock), and are often served  or sold at mountain inns as MOUNTAIN GOBO (yama gobo). I would certainly recommend sampling this earthy and rustic, wild vegetable at least once, you might even develop a taste for it! 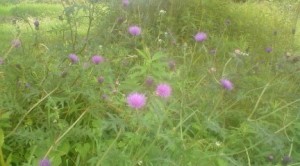 Even if you dont, keep an eye open for them on Tsukuba`s country roads and paths. Their beauty might just even stop you in your tracks.

And lets not forget that these thorny flowers, relatives of the chrysanthemum, the symbol of Japan`s Imperial Family, are the National Flower of Scotland. One explanation for this is that in the times of the Viking invasions, one of the enemy, approaching barefoot, stepped on a thistle and gave out a cry, warning the Scots of their approach and giving them time to prepare for battle, and thus saving the day. 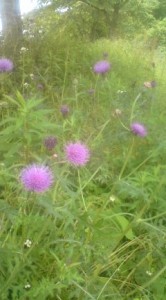 Here are some more on this months flowers: 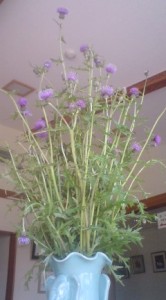 No-Azami in an arrangement in Hojo, Tsukuba