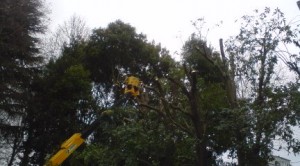 Tree-“Trimming” Crews At Work in Tsukuba 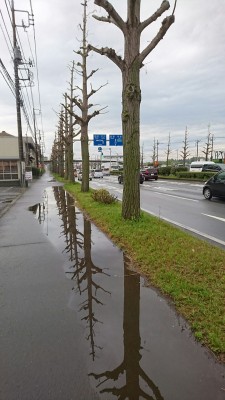 The gingko trees along the Tsuchiura-Gakuen Road after the tree-trimmers got to them – April 18, 2018

If you love trees or nature in general, a ride on the TX can be a depressing experience. Especially the segment between Moriya and Tsukuba Center. Vast tracts (by Japanese standards) of woodland have been bulldozed away on both sides, leaving a barren landscape upon which monstrous apartment complexes, shopping malls, and sterile housing communities are being constructed. 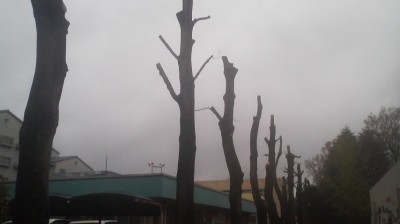 In Tsukuba City itself, with its numerous parks and tree-lined walkways and boulevards, you might have thought you were in an oasis of greenery in early winter, as the planners of this city have provided us with numerous tree species, including many which stay green all year-round. 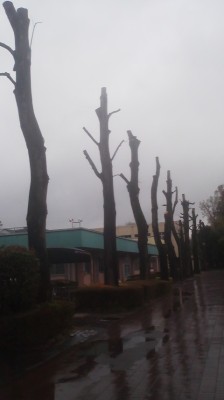 And this is what you get! Its hard to get into the spirit of spring with the results of their handiwork! (Matsushiro Shopping Center, spring 2015)

If so, you were in for a disturbing surprise.  As February starts to draw near, the tree and bush maintenance crews, working for companies which have lucrative long-term contracts with the city, go into action, or should I say go on the rampage, and they slowly make their way down the avenues and walkways, sawing away most branches, leaving behind sad looking mutilated trunks. Where once, in the dead of winter, you had a tree-canopy-covered walkway, you now have a path which is desolate and forlorn. 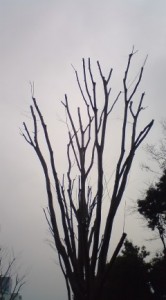 The work itself, though, provides plenty of entertainment. I was surprised to see how many people of all ages and genders gather to watch the work-men and women, using cherry pickers and other assorted machinery, to do their butchering and noisily dispose of the leaves and branches in garbage trucks. 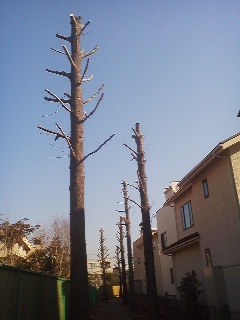 When I commented to one Japanese gentleman who was observing the proceedings that it was a shame that all this winter greenery should be turned into trash, he responded by saying: “MITOSHI GA YOKU NARU”, or- NOW WE HAVE A CLEAR VIEW! 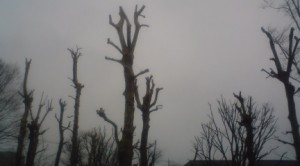 One Of Our Lovely Parks

There must be a more sensitive and aesthetic way of grooming and maintaining trees and bushes, especially for the huge sums of money that the city, prefectural, and national governments pay to the companies who do this work. 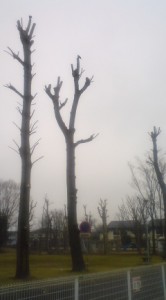 The Japanese often say that they love nature. But the annual transformation of Tsukuba’s wonderful trees into disfigured BONSAI makes me question exactly WHAT THAT MEANS.

One thing seems sure to me though- those who grow up in this culture have a great talent for NOT SEEING or noticing anything unpleasant. Show your Japanese friends and acquaintances these pictures I have taken, and ask them if they have ever taken note of such trees before. Everyone I have tried this with has responded by saying that this was their first time to think about it, and that it really was STRANGE to have parks full of such SAD trees. 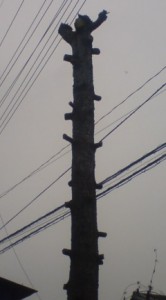 And keep this in mind.

If you are new to Japan and have a garden, always remember that if you hire gardeners, you have to be extremely explicit when explaining what you want them to do. But no matter what you tell them (even in clearly understandable Japanese), you will still probably come home to a garden of branchless stumps (as has happened to me). 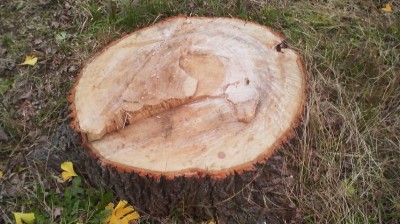 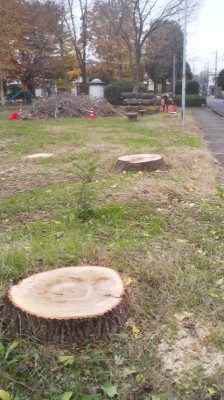 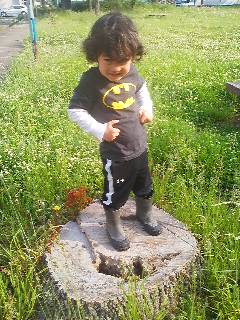 Not pleased with what has happened to the trees!

Of all Japan`s 47 prefectures, Ibaraki has the second lowest percentage of forest cover (less than 30.8%) – and this percentage is getting lower with each new shopping mall and bed-town in the Tsukuba area. 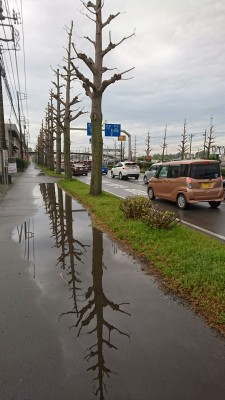 The Tsuchiura-Gakuen Road after a tree-trimming 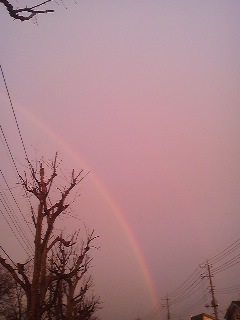 Beyond the clipped trees- a rainbow (Matsushiro, Tsukuba)

I have written more about tree-trimmming and pruning in Japan here.