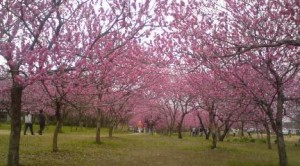 Peach Trees In Bloom In Koga

In ancient China, peach trees, with their boldly colored blossoms and their numerous brightly colored fruits, came to be associated with the positive forces of the Yang (as opposed to the dark and negative Yin), and were believed to be useful for battling and dispelling evil . That is why on the 3rd day of the 3rd month of the Chinese calendar (usually late march or early April),around the time when the peach trees usually burst into bloom, annual rites of purification and exorcism were held, on what was known, among other names ,as The Peach Festival. 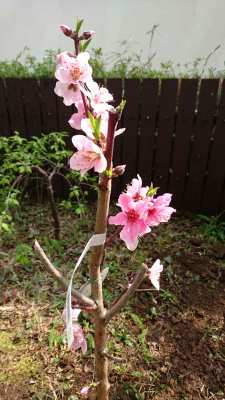 A peach tree sapling that I planted in my backyard in full bloom (April 3, 2018)

When this custom was introduced to Japan,  the aristocrats of the Heian Court would purify themselves when the peach blossoms were in bloom by rubbing doll-like figurines against their bodies  and then cast the dolls, along with all the evil they had absorbed, into a stream, river, or the sea. As the centuries passed, these primitive figurines (hitogata), evolved into what are today`s extravagant Hina Dolls, which instead of being disposed of in the water, are symbolically boxed up and put away on the day after the festival. Peach trees  remain, of course a part of the full Hina Doll sets, as reminders of the original meaning of the Hina Matsuri (aka The Peach Festival). 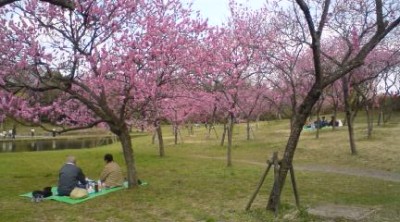 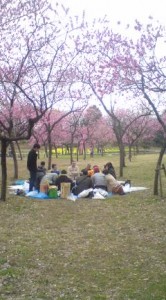 Unfortunately for the peach, its ancient  significance, and its relation to the Girl`s Day Doll Festival have been all but forgotten, despite  Japan`s most famous legendary demon fighter being The Peach Boy (Momo Taro), and  the Hina Doll Festival being alternately called The Peach Festival. 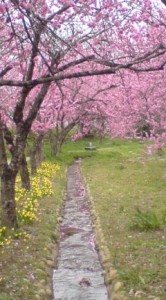 The reason for this state of affairs is not only the passage of time and cultural amnesia, but most importantly, the fact that the Japanese  changed their calendar, from the Chinese based lunar-solar calendar to the Western Gregorian calendar. With that change, the 3rd day of the 3rd month of the new calendar (March 3rd), the Doll Festival and the ancient Peach Festival, came to be celebrated about a month before the peach trees actually bloom! Thus the association has been lost! And more to this, for some reason, decorative peach trees in general, are not very commonly found in Japan these days (though of course you can find them here and there). 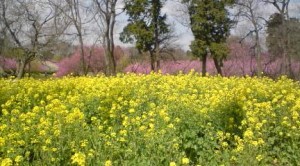 Nanohana and Peach Blossoms In Koga

One place where decorative peach trees (by that I mean those which are not cultivated for their fruit) are still the center of attention when they bloom , is Koga City, an old castle and post-town on the Western edge of Ibaraki, about a 90 minute drive from central Tsukuba. There, every year in late March and Early April, the city`s peach festival is held at The Koga Sogo Koen Park. I visited the park today and was lucky to find its couple of thousand peach  trees near full-bloom (they should be at their best this year just around March 29th which is the day of the Hina Matsuri Girls Day Festival according to the old calendar). Peach blossoms (momo no hana) are much more deeply hued than cherry or plum blossoms , and beautiful color combinations emerged as I walked around the park among the yellow nanohana (rape blossoms) and the soft green of the fresh leaves of the weeping willow trees (yanagi). 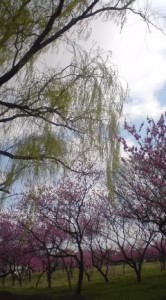 Yanagi and Momo in Koga

The connection between Koga and Peach trees goes back to the Edo Period(1600-1868) when Koga, then a vital link along the land and river transportation routes from northern Kanto to the capital, was given over to be ruled by the trusted Doi Toshikatsu(1573-1644), who had long served as an advisor to the Shogun. Seeing that his new domain lacked fire-wood, it is said that the lord suggested that the children of the Clan`s retainers residing in Edo (the capital) pick up any discarded peach seeds that they might find on the streets of the great city, and bring them back to Koga. This was a good idea, because peach trees are fast growing, bear pretty flowers and delicious fruit, and need to be pruned. The branches cut away could be used as fire-wood. This is how Koga became the city of peaches (though the old trees are now all gone and the park a much later creation). 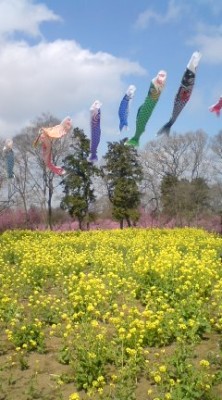 Carp streamers and NANOHANA (rape-blossoms) at the Koga Peach Garden 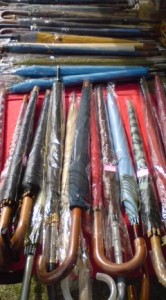 For the occassion of Koga`s Peach Festival, local businessmen and women offer a whole slew of peach related goods, with peach beer and sake being my favorites. The city other famous products are also on sale at booths at the park. Though Koga once produced most of Ibaraki`s silk, after WWII the industry almost completely disappeared. Now, Koga`s most important industry is the production of umbrellas- no, not the tradtional type-just plain ol` umbrellas. 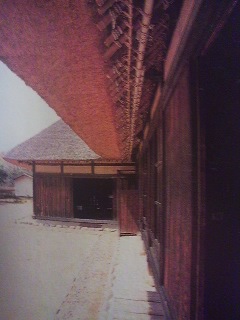 Adjacent to the Peach garden is this old house- the former residence of the Tobita Family. It has been registered as an Important Cultural Property of Japan

Koga city, which lies along both the Tone and Watarase Rivers, has a few other noteworthy sites for the visitor interested in Japanese history- the name Koga is even mentioned in the Manyoshu- Japan`s oldest anothology of classical poetry. There are old houses (including the former residence of the Edo Period Dutch-Studies scholar TAKAMI SENSEKI – 鷹見泉石), shops, and some museums- one of which is the oldest museum in Japan dedicated to TENKOKU, the calligraphy carved onto stamping seals. 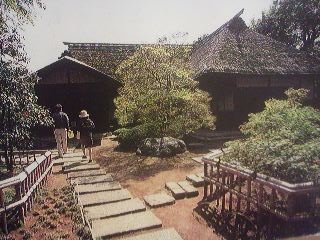 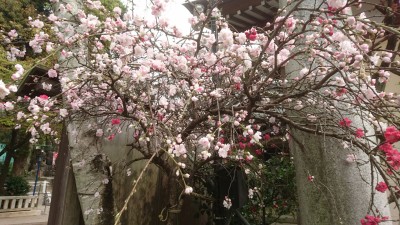 Let me leave a more detailed discussion of these for another day, because at this time of year, koga only means one thing-  Peach Blossoms. Go see them (though you might already be too late!).