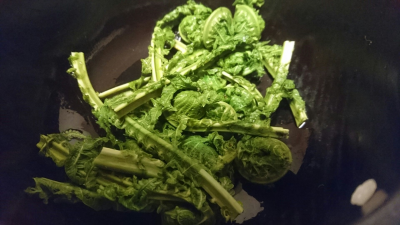 KISETSU KAN (季節感)- having a sense of the season, and OSUSO WAKEH (おすそわけ)- sharing with others whatever bounty one might have been blessed with, are two concepts anyone interested in Japanese culture should know – and they both played an important role in the story I`m about to tell you.

It was a fine Saturday morning in mid-April. As I passed by the Kasuga Community Center, not far from the Tsukuba University Hospital, someone ran up to me from behind, calling my name – almost making my heart stop in the process. Spinning around, I saw an old acquaintance of mine, a woman I sometimes run into – and whose name, unfortunately, I never seem able to recall. I DO remember, though, where we first met – at the Omido Temple on Mt. Tsukuba (the remnant of the massive Buddhist complex that long thrived where the Mt. Tsukuba Shrine now stands).- and whenever I do meet her,  she keeps me informed of any events being held there.

After an exchange of “long time, no see`s” and “How are you?`s”, I asked her what was going on at the temple and found out that it was now actually closed for rennovations. Surprised to hear that, I thanked her for the news, told her that I was lucky to have met her that day. Then, as I was about to turn and head off on my way  she held up a plastic bag full of what looked like young plants picked off the forest floor. It was to give me these, she said, that she had chased after me.

“This is KOGOMI. My back yard is full of them. Take some – they`re delicious as tempura”.

And then she was gone – while I was left holding a bag stuffed with ferns. 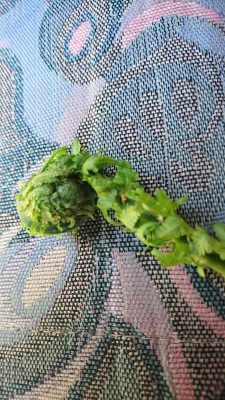 A single kogom stalk – now you can see why in English these youg ferns are called fiddleheads!i

So you see, her generousity – the spirit of OSUSO WAKE – resulted in my standing there holding a back full of what I was later to learn were edible baby ferns which in some parts of the English speaking world are called fiddleheads.

And the reason she thought these curly fronds she found coming up behind her house were worth giving was because the Japanese have always enjoyed eating wild vegetables in spring – as a way of staying in tune with and celebrating the season! There are several varietes which are popular – and I have written in the past about a few: TARA NO MEH (タラの芽), FUKI NO TOH (蕗の薹) and others – not the most delicious things in the world, but something, which like the Japanese, I now try to eat at least once each spring to get into the season. 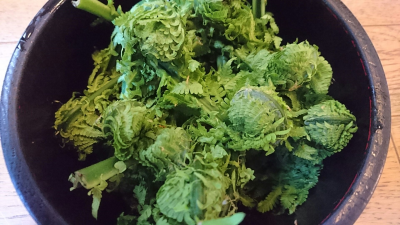 Not being very good at making tempura, I searched the internet for other ways of cooking my fiddleheads – and found dozens of recipes. I decided on what seemed to be the easiest – boiling briefly and then seasoning with noodle sauce (MEN TSUYU). And though I was expecting the same slight bitterness usually found in SAN SAI (wild vegetables), my KOGOMI were not in the least bit so – and they were deeply flavorful, too.

Can`t wait for next spring to celebrate the season with them again – just hope I`m lucky again and become the lucky recipient of someones OSUSO WAKE!

The only thing to worry about is that other all important Japanese concept: OKAESHI – the giving of a gift in return!