Why Are Coins (rudely) DROPPED, TOSSED, or THROWN into Offerings Boxes at Japanese Shrines and Temples 12 January, 2018 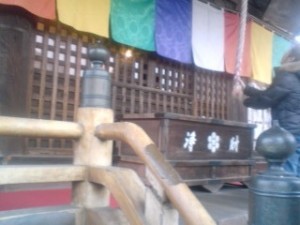 The offerings box at the main hall of the Izumi Kosodate Kannon in Tsukuba- the box reads JO-ZAI : purify your property

In front of just about any Shinto Shrine`s or Buddhist Temple`s main hall in Japan, you will find an offerings box- sometimes several of them within a single compound, placed in front of smaller, subsidiary halls or sacred images. Worshippers ( or visitors or tourists) can be seen putting money into them ( usually coins, and especially 5 Yen coins*) at any time of year. When there are any nationally or locally recognized festivals or traditional events , there is of course more activity at the donation boxes ( SAISEN BAKO, 賽銭箱). This is especially true at New Years time when tens of millions of people visit shrines/temples during the first week of the new year ( with some people making multiple pilgrimages  AND offerings during that period).

But no matter when you watch DONATIONS being made or who you see making them- whether tourists just visiting a shrine or temple as part of a sightseeing tour, neighborhood locals dropping by their local shrine ( or temple) to pray, or during New Years Week where at the most popular shrines many stand in line (maybe for HOURS!) just to GET NEAR the donation box ( from where they will THROW COINS into the huge boxes ( set up for the occassion)**- you will notice ONE STRANGE thing ( which I have already hinted at):

Though before and after actually giving the money, everything is done with the care for FORM and politeness which the Japanese are famous for, the act of putting the money into the box seems to be completely out of context- THE COINS ARE CASUALLY DROPPED, PLUNKED,TOSSED, OR EVEN THROWN (as I have already mentioned above) into the box !

For anyone familiar with Japanese culture this should appear do be quite unbelievable. When giving gifts, especially in formal situations ( and even in informal ones!) the Japanese usually presents gifts with great humility and courtesy. Those who have recieved money from Japanese people have probably noticed that money, bills OR coins are put in an envelope before being handed to someone ( and if there is no envelope they might wrap the money in paper or even tissues!).

How can it be then that when giving money to a shrine or temple the offerings are made with such a lack of common courtesy?

The answer to this question is very interesting indeed to anyone interested in traditional Japanese thinking. And what makes it even more interesting ( well at least for me), is that most Japanese themselves do not know the reason ( and have probably never even thought about it)- they merely act as their ancestors acted as the manner in which money is given has been past down ( by children imitating parents) from generation to generation.

The key to understanding the concept of roughly throwing coins and bills into the donation box is that originally the money was NOT GIVEN AS A DONATION, BUT WAS CAST OFF AS AN ACT OF RIDDING ONESELF OF IMPURITES WHICH HAD BEEN ABSORBED BY THE COINS.

In previous articles I have often discussed how it has traditionally been important to ritually cleanse oneself by casting impurites into a scapegoat which is then CAST AWAY.

Coins and bills are traditional receptacles for bad energies.

I have previously described a ritual ( which can be found performed in various parts of Japan) in which men of unlucky age ( YAKU DOSHI), especially 44, go to a shrine and don a loincloth. Inside this traditional underwear, right up against their Genitals, they put coins ( and rice cakes). They then strut about deliberately trying to drop the coins from their loins- and thus dropping the unlucky energies which had been absorbed by the coins ( and rice cakes).

Another example illustrating this concept of money and its bad-energy-absorbing qualities is the ZENI ARAI BENTEN (銭洗い弁天)- the Money Washing Benten Shrine, which is located in a cave in Kamakura. For centuries people have gone to that place to wash (and dry) their money- in the belief that once purified that it will increase.

So though now most Japanese people think that they are giving donations ( and in fact that IS what they are doing), they are actually continuing an ancient act of purification which is reflected in HOW THE MONEY IS GIVEN- tossed away with distaste and a sense of good riddance!

( Come to think of it, whoever thought of this idea was a great businessman!)

Naturally, traditional donations to shrines and temples such as rice, sake, fruit, food, and of course cash payments for various services, are carried out with the usual courtesies- with elegant wrappings and exchanges of niceties.

And while at most shrines today the offerings boxes will read HO-NO- (奉納), meaning offerings, today ( Jan. 1st, 2012), I visited a temple near my house- the Izumi Kosodate Kannon- and saw that on its offerings box was written: 浄財ー ＪＯ－ＺＡＩ which means CLEANSE YOUR MONEY!

This temple obviously has no problem taking dirty money! This whole business appears to be another case in which the word money-laundering could be used! 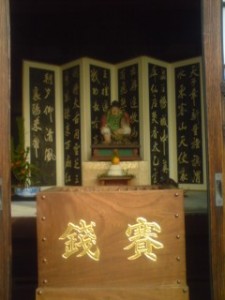 An offerings box reading- SAISEN ( offerings) in front of an image of EBISU, one of the Seven Deities of Good Fortune

* It is now common to give Five Yen coins ( GO EN DAMA) at shrines and temples because GO EN ( usung different Kanji Characters) means AFFINITY, suggesting that the giver has an affinity with the shrine or temple.

** The shrine with the most visiitors during the New Year period is the Meiji Shrine in Harajuku ( Tokyo). I t is said that 3 million visitors come to pray AND throw coins and bills into the huge donation boxes ( the wait to get to these boxes can be longer than 2 hours). I have heard that some ( unscrupulous) people who go dressed in certain types of wear ( for example those with hoods) so that they can come away with some  booty- coins that dont make it as far as the boxes!

Naturally, the presence of large crowds carrying cash attracts another unscrupulous type- the pickpocket! A few years ago on New Years Day, I found that when I finally reached the donation boxes I found that someone had lifted my wallet! A bad start indeed for the New Year!

And as you can imagine, with money going into a box placed outdoors, people sometimes are weary of strangers lurking about- especially at smaller shrines or prayer halls. I have written about one uncomfortable encounter in which I was trying to ask about a ceremony being held but instead got everyone nervous that I had come to rob the donation box. It is here: 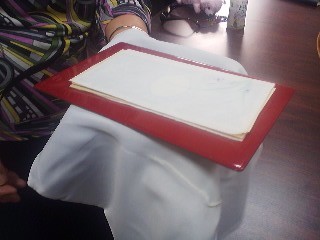 You might have noticed how in Japan money is often handed over to tutors, teachers, editors, etc. in an envelope (and there are apologies when there is none).
In Mie Prefecture money money is wrapped in paper and presented on a lacquer tray 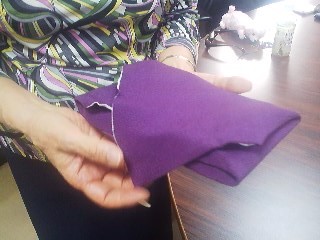 Or wrapped in a FUROSHIKI cloth