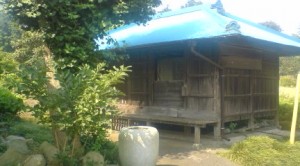 It can be said that until about 50 years ago, the hamlet of Saiki ( 妻木), now a part of Tsukuba City, was at the edge of NOWHERE. This is because the land on which nearby Tsukuba Center, Tsukuba University and all their accompanying shops, restaurants, and apartments now stand, was once a large tract of impassible woods and marshland. Though remnants of this lost ecosystem can still  be found in the  string of small parks with ponds which run  on a nearly straight north-south axis right through the center of  Tsukuba, this once forested area has been turned into the CORE of what is now the SCIENCE CITY. Many of the old residents of Saiki, once poor farmers living in a remote area, have now become prosperous landlords living the easy life, as they have put up on their properties the abundance of chinsy apartments in which so many students (and others) live ( and pay dearly for). 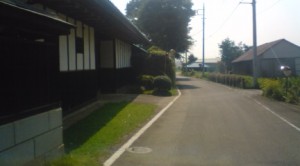 Today the neighborhood of Saiki, an oasis of traditional village-scapes just minutes from Tsukuba Center by bicycle, lies sandwiched between the concrete-bank encased Hanamuro River and the 4-lane, chain- restaurant lined boulevard called Higashi-Odori. And while it offers the typically enchanting characteristic features of the deep Ibaraki countryside- the rice, vegetable,buckwheat and turf- lawn fields, the flower patches, the majestic housing compounds with heavy-laden fruit trees which can be seen through the gates or jutting out over the walls, the war memorials, the clusters of sacred stones,  and the shrines and temples- one feature of Saiki stands out as a curiosity. It is a  small, blue, tin roofed, wooden structure, slightly elevated off the ground by posts, which because of its size, shape and design does NOT appear to be either a shrine, temple or tea house. 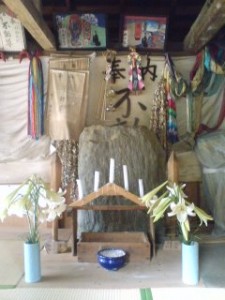 The Sweating Fudo Stone inside the hall

When I first came across this little building, I naturally wanted to know what it was. I got off my bike, walked up to what looked like the front, and peered through a wooden grating. Inside was a sight surprising and mysterious ( some would say creepy!)- a stone slab behind a strange pyramid shaped candeladrum flanked by two upright wooden swords and fresh flowers. Behind this, on the wall, were what appeared to be votive pictures and  colorful wreaths of SENBA-ZURU ( chains of one thousand origami cranes). There was also a banner which told me exactly what this stone was- a manifestation of FUDO-MYOO ( 不動明王), one of the more popular figures in the Buddhist pantheon in this part of Japan. 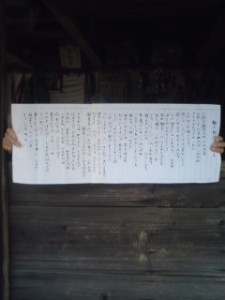 The prayer chanted each month

Usually, such a stone would have a much smaller shelter( if any at all) and I realized that the structure must be a meeting hall for prayer sessions to O-Fudo Sama (as the deity is affectionately called), similar to the much larger one that can be found in Higashi-Oka, just across the Hanamuro River ( I have written about that prayer hall and its prayer meetings in more detail at: http://blog.alientimes.org/2008/07/higashiokas-fudo-ko-a-meeting-with-the-unmoveable-one/

Anyway, to learn more about the traditions of this (Saiki`s) Fudo Meeting Hall I walked  a couple of steps across the narrow road and called out for help. An elderly woman dressed for farm work greeted me cheerfully and told me nearly all I wanted to know- that the  hall was called the FUDO-ZON and that there were prayer sessions held every month on the 27th for family health and easy delivery ( if there were any pregnancies in the neighborhood). There could be special prayer sessions if someone  called for them. This would be if one of O-Fudo-Sama`s devotee`s relatives or friends  were ill or injured. 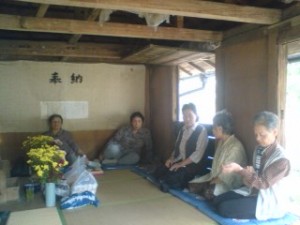 Gathered for the Fudo-Koh on the 27th of the month

These prayer meetings are for women only, and have been going on for generations. Even in these days of modern medicine, pregnancies are times of anxiety, so imagine what it was like in the days when mothers and babies commonly died in childbirth. It became the custom for the local women to gather once every month, have tea and snacks and then pray ( by beautifully chanting a prayer from memory as one member pounds on a small gong). The Fudo Stone itself was the property of Mr Yokota ( of the family across the street!), who had bought it for some purpose or another and then noticed that it glittered at night. Upon closer examination he found that there was an image on the stone ( which he felt  was that of O-Fudo-Sama). 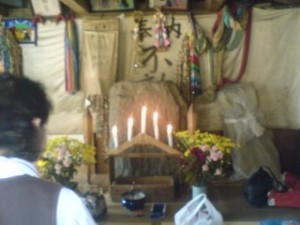 When neighbors prayed to the stone, they sometimes noticed that it became moist. Thus, it became known as the sweating Fudo, and because those who had come to pray to it often had their prayers answered, the fame of the stone grew. Thus, even today, some women come from far-flung neighborhood of Tsukuba to pray there ( in gratitude for past benefits recieved). The wooden swords, candelabrum etc. inside the hall, have all been donated by those who believe that O-Fudo Sama  has helped them in the past.
Of course, I have observed one of the prayer meetings which are held on the 27th of each month ( from 1-3 pm). These days, there are six women who regularly gather. If you are expecting ( a child) you might want to join them in prayer! They will certainly be happy to have a fresh young face among them! The location is beautiful, the ladies friendly, the music ( chanting)quite enchanting, and the whole atmosphere extremely exotic ( even for most Japanese).
Look for the blue tin roof ! 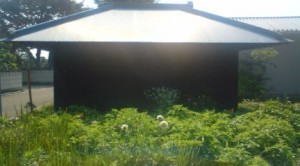 The Fudo Hall glitters in the sun 2009