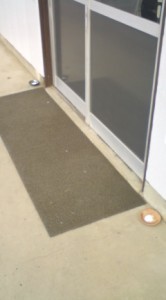 Salt placed outside the entrance to a shop in Saiki, Tsukuba

Recently, a little pottery workshop has opened up along a street which I frequently pass, in Tsukuba’s Saiki neighborhood. In the early mornings I have sometimes seen the proprietress solemnly sweeping out front, getting ready to start the day.  I have not yet been INSIDE to find out what kind of classes they have to offer, but what I HAVE noticed on the establishment’s OUTSIDE, more specifically, at its front entrance-way, sticks in my mind. Tiny white piles of salt, in little earthen-ware dishes (because it’s a pottery workshop) placed on the ground on both sides of the front door: Morijio, or mori-shio (盛塩). 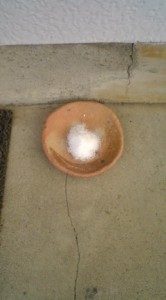 In Tsukuba, Morishio salt piles can be seen at the entranceways to certain Japanese-style restaurants, pachinko parlors, hostess clubs and other night-time entertainment spots — even love hotels. The fact is, however, that as in the case of the pottery workshop, you never really know where you might find them, and their being quite uncommon around here makes them all the more striking when you DO come across them. Morishio can also be found in the gardens of private homes (usually in the unlucky North-East corner), and even in the houses themselves, especially as offerings to the family’s Shinto altar or in the WC! I have even seen them in the dugout of a professional baseball team which was mired in a slump while watching the game on TV!

Morijio in the toilet helps adjust the home’s feng shui

As I have told you many times before, no aspect of traditional Japanese culture is simple if you take a close look at it, and this is again the case with morishio. The custom has both Chinese and Japanese roots and has evolved to have special significance, even today, for those who prepare them as well as those who merely see them.

Many Japanese associate piles of salt with entertainment establishments, especially restaurant and hostess clubs. The reason for this is complex. First, there is the belief that the morishio helps attract customers. This is because of a story, which came to the Japan from China during the Heian Period (794-1192) when just about anything Chinese was admired, sought after and emulated, by the aristocrats and courtiers of the Japanese capital. It was said that an Emperor of China had 3000 concubines living on the palace grounds, and would night by night (and probably day by day as well!) slowly make his rounds by ox-cart (though some versions say the cart was drawn by sheep!), trying to get to KNOW as many of his ladies as time and vigor would allow. As you can imagine, many of the concubines waited in vain for a chance to get close to the emperor (while I’m sure there were many who prayed that he never got around to them).

One particularly clever woman, it is said, laid out some salt, which is irresistible to most beasts of burden, by her entranceway. And though the emperor had intended to head to another woman’s dwelling, his ox led him to the door with the salt placed in front of it.

Due to the impact of this impressive story, it became customary, especially for those who operated establishments for the entertainment of gentlemen, to place salt under the eaves by the entranceways. No doubt it actually did attract the horses and oxen of the rich to their doors. Later the custom was adopted by other types of establishments.Today, there are some traditional, high-end restaurants which put out tall, beautiful cones of salt out when they open for business, and then smudge the pile after a customer enters, to show that there are already guests inside. 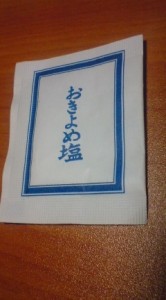 Packet of salt for use after funerals

There is, however, another reason, with roots in native Japanese religious beliefs for putting salt at entranceways — ritual purification. Salt is one of the traditional PURIFIERS in Japan, along with fire, smoke, sake, sand, and water. Salt is thrown by sumo wrestlers before they enter the ring, those who have just been to a funeral or wake sprinkle salt on themselves just before they enter their front doors, and families often place salt in the North-East corners of their houses or gardens to protect them from the bad luck which emanates from that unlucky direction. The Japanese might even throw salt if someone distasteful to them has spent time in their home.

The use of salt for ritual purification has its roots in traditional MISOGI or the spiritual and physical cleansing which was originally carried out with sea water. Techniques for producing salt from sea-water (not an easy task in humid Japan) later made it possible to perform this task of cleansing away from the sea — with the use of salt alone.

Thus, the piles of salt are also put in place at entranceways in order to ward off bad luck and impurities.

Having fresh clean piles of salt in front of your establishment is today a reassuring SIGN to the public that you have been taking care to keep your place clean and purified. It also shows that you have salt AVAILABLE, in case some defilement occurs and purification becomes necessary. 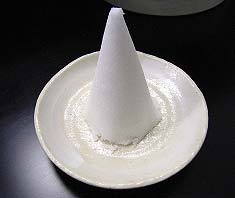 There is no doubt that beautifully stacked, white cones of salt make a strong impression on a prospective customer. The fact that the staff probably changes the salt everyday suggests that great care is put into keeping the place clean and well maintained. 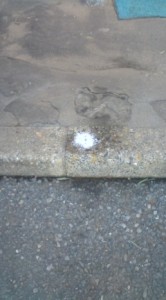 This is made clear when you sometimes come upon a restaurant, or other business which has fallen on hard times and fails to keep their salt piles properly maintained. NOT VERY INVITING!

Morishio is also believed to play an important role in adjusting a home’s fu sui (feng shui). There are numerous morishio related products available online. Check some of these out: