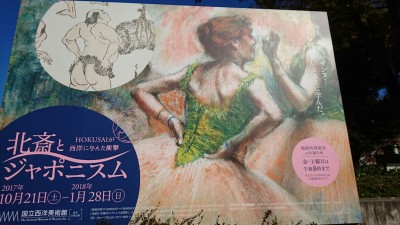 Hokusai and Japonisme – an exhibition at the National Museum of Western Art in Ueno, Tokyo (Thru Jan. 28, 2018) is an exhaustive (and exhausting) lesson in how certain mid-late 19th century European artists (including some of the biggest names in the art history) were influenced by the works of Katsushika Hokusai (1760-1849). I guarantee that anyone interested in the evolution of Western art will be surprised at how great the impact actually was and in what forms this influence manifested itself. The poster above suggests that the pose of the dancer painted by Degas was influenced by Hokusai`s depiction of the man in the loin-cloth. There are hundreds more examples brought to our attention in the show. 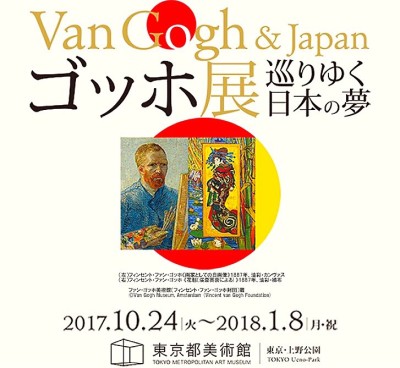 Van Gogh and Japan at the Tokyo Metropolitan Art Museum – This exhibition details how one of the worlds most famous artists was influenced by Japanese art. Even more impressive than the actual graphic evidence shown were the abundant quotations. For example in a letter dated June 5, 1888 he wrote to his brother Theo : “After some time your vission changes, you see with a more Japanese eye, you feel color differently.” And if you have any doubts to the impact Japan had on him there in the letter (once again to Theo) from July 15, 1888 in which he claims: “All my work is based, to some extent, on Japanese art”, Thru January 8 (though you can still catch the show in Kyoto after that.

If you don`t feel like braving mind-numbing crowds during the last week of the Van Gogh Show (and you`d probably be making the right move in NOT going), having a look at this page from the Van Gogh Museum in the Netherland`s homepage will be an excellent substitute (one that certainly involves much less cost and effort!). 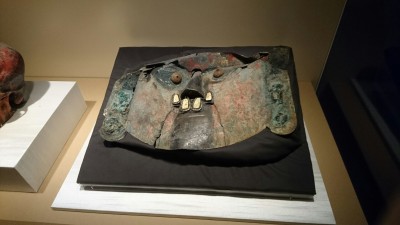 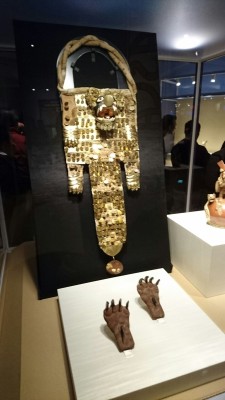 Most of the artifacts from nine different pre-Incan Andean civilizations (none of which I had heard of before) were unearthed in excavation projects sponsored and supervised by Japanese archaeologists.

Prime Minister Shinzo Abe has been in office for six years, all the while doing his best to re-instill  Japan with a spirit of pride and nationalism (in other words he`s been trying to Make Japan Great Again for a long time – long before most Japanese had ever heard of the likes of Steve Bannon or Donald Trump). You can see the fruits of his labors any night if you turn on the TV. Your bound to see some of the programming that has by now become everyday fare – interview after (highly edited) interview with foreigners (tourists and residents) who extol the beauty,virtues and wonders of this country, it`s people and culture (not very much different, really from what you might imagine North Korean media to be like). Nothing negative, no complaints, no mention by visitors that they have also visited or studied in other lands or that they`d come to Japan now because it is relatively cheap ( something which would be a jolt to the national self-image of most Japanese).

Well, this sort of “feel-good-about-your country” culture is not confined anymore to the boob-tube or comics – it has permeated the halls of highest culture, including  some of Japan`s finest museums in Ueno. At two (admittedly excellent) current exhibitions there are tens of thousands of (mostly older) Japanese coming out muttering “They copied everything!”…. and by “they”, they mean some of the biggest names in Western art – Van Gogh, Monet, Degas, Cezanne, Redon, etc..

Thus, you should keep in mind that a visit to the two exhibitions I mention above are of great interest not only for learning how certain artists of the Impressionist, Post-Impressionist and symbolist movements were dramatically affected by Japanese art, but also for getting a sense of how Japan is changing year by year in terms of attitude (though I do admit you would have to make a comparison with what things were like ten years ago). 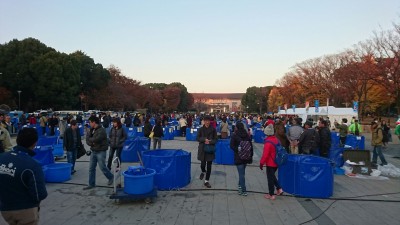 This open space between the Ueno Zoo, the National Musem and the National Science Museum was once the sight of a great Buddhist temple (Kan`eiji), the titiular temple of the Tokugawa Family which ruled Japan from 1600 to 1868. It was destroyed in July 1868 in the Battle of Ueno fought between the pro-Shogunate SHOGITAI and the pro-Imperial; troops. These days there are two large Starbucks outlets there (on the sides) and in the wide open space you will always discover some event or another going on. Last week I came upon this curious scene. I wondered what could be in the pools… 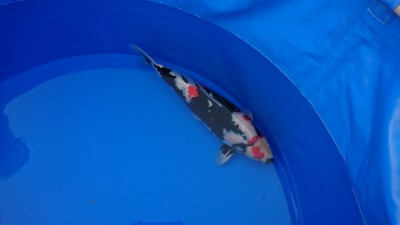 Decorative carp – some selling for over a million yen ! That was only on that day though, saw you never know what sort of event they`ll be holding when you visit Ueno Park. 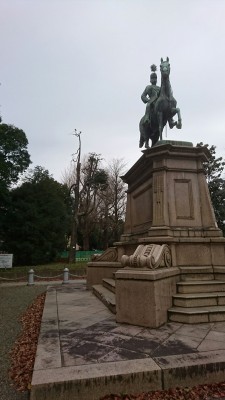 As you approach the zoo, on the left side you`ll see this large statue of Prince Komatsu Akihito cypress tree planted by President Grant. Behind the statue though, is something really interesting ! A tree planted By President Ulysses S. Grant in 1879 (note the dead tree behind the statue). The the tree was killed by disease it still stands. 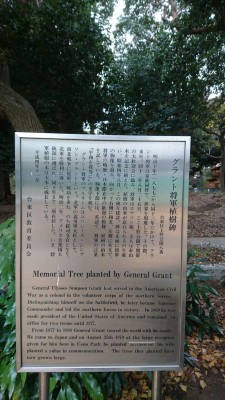 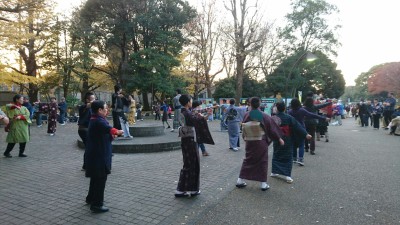 Keeping traditional dances alive in Ueno! There`s is always something going on in the park (easily accessible from Tsukuba -change in Akihabara to the Yamanote Line)