Watching the First Sunrise of the Year ( HATSU HINODE, 初日の出) From the Seashore or High Up on a Mountain 31 December, 2017 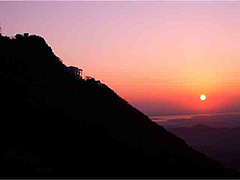 Hatsu Hi no De ( the First Sunrise of the Year) as seen from near the top of Mt. Tsukuba

It probably should come as no surprise that here in The Land of the Rising Sun, a land in which a myriad gods and natural phenomena are looked upon and treated with religious reverence, it is considered highly auspicious to greet the first day of the new year by WATCHING THE SUN RISE. The most outstanding of the heavenly bodies, the sun is connected with what is probably Japan`s most famous deity- AMATERASU – the sun goddess  and divine ancestor of the Imperial family (according to myth). So it seems only natural that along with listening to the bells at a Buddhist temple, a visit to a Shinto shrine and the acquisition of a new amulet and/or lucky objects ( ENGI MONO) on New Year`s Eve that many Japanese ( and anyone else livlng in Japan) would wake up ( or stay up all night) for watching ( and perhaps saying a prayer to) the first rising sun of the year- which is called HATSU HI NO DE (初日の出) in Japanese. 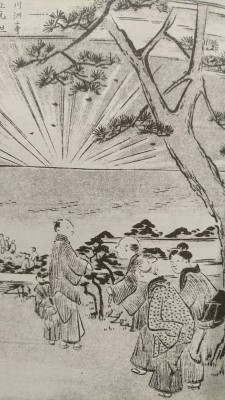 Of course this can be done from anywhere, but you might find that many of your Japanese friends or acquaintances will tell you how they are planning to do this by driving out to the coast, or going up a mountain ( to possibly see the reflection of the sun in the clouds- a phenomenon called GO RAIKO in Japanese). This IS more than a bit  surprising because doing so involves plenty of bitter cold, lack of sleep, and for many- LONG JOURNEYS IN HEAVY TRAFFIC. I guess this just shows you how important the tradition of watching the HATSU HI NO DE still is in contemporary Japan.

For those living in Ibaraki, there are two especially tempting possibilities for greeting the first sunrise of the year. One is driving out to the coast, near the Kashima Grand Shrine or further south at a place called Inu Bosaki ( located in Chiba Prefecture). This easternmost part of Honshu Island is the where the sunrise can be seen EARLIEST in the main islands of Japan ( and this is ONE of the reasons why the spots on which the Kashima and Kattori Grand Shrines stand are considered sacred.

Because watching Hatsu Hi no De from the coast of southern Ibaraki and Northern Chiba is so popular, you have to book an ocean view room ( or any room at all, for that matter) at seaside hotels in that area a YEAR in advance.

The other, tempting idea ( especially for Tsukubans), is watching the sun rise from the top of Mt Tsukuba. This is because you will not only be able to see the sunrise ( and possibly a GORAIKO), but also at the same time ( weather permitting) to have a look at another of Japan`s most auspicious symbols ( and thus a great way to start the new year- Mt Fuji.

Since it is such a good place for enjoying the Hatsu Hi No De, both the cable car and ropeway to the top of Mt Tsukuba will start running at 4:30 AM on January 1st.

1) It might be cloudy! The forecast this year calls for cloudy weather on the morning of the first- but who knows?-  They CAN be wrong!

2) Transportation. Bus service from Tsukuba Center does not begin until 7:00 AM. That means you can either stay up all night ( after having visited the Mt Tsukuba Shrine at midnight)- or drive up hoping there wont be TOO MUCH traffic.

If you do decide to see HATSU HINODE-  I wish you GOOD LUCK. Most probably I will NOT see you atop the mountain at 6:45. I TRULY need my beauty sleep! 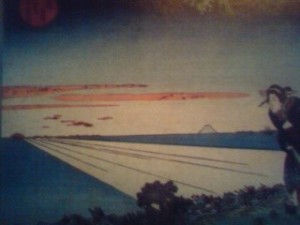 Hatsu hinode and Hatsu Fuji ( the first sunrise and first view of Mt. Fuji of the new Year)- a woodblock print by Utagawa Kuniyoshi

Waiting for the Sun Stones ( 日待供養塔)

I would also like to point out to those of you interested in the Tsukuba Area that because of the popularity around here of  the Shingon Sect of Buddhism and in former days of SHUGENDO-a syncretism of Buddhism, Taoism, and Shintoism, there were ceremonies held in which people waited for the sun to rise. This is because the main deity connected with these sects- the DAINICHI NYORAI- is also associated with the sun.

There are several old sacred stones which can be found within the precincts of Tsukuba City which commemorate these WAITING FOR THE SUN ceremonies. These particular types of stones are called HIMACHI KUYO-TO, and two of those found in Tsukuba are the oldest such stones in all of Japan.

I have written about these sacred stones here.