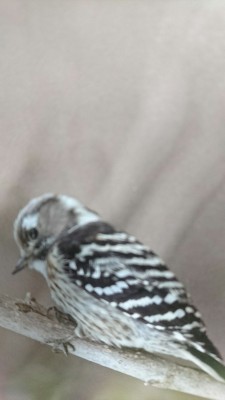 Japan`s smallest woodpecker, the KOGERA
(Japanese pygmy woodpecker – dendrocophus kizuki) is found throughout Japan`s main islands. Since the 1980`s they have been frequently spotted in residential areas. Though only about 15 cm in length and camouflaged to blend into it`s surroundings, you can tell one is nearby when you hear a gentle, but rapid-fire knocking on wood!

Forty years ago, much of the land upon which the Tsukuba Science City would be built, consisted of woods and marshland. In the 1970`s large wooded tracts were cleared to build Soviet-style  government housing (inspired by the Science City Akadem-Gorodok, located not far from Novosibirk). The new housing communities were called Matsushiro (once the Teshirogi woods), Takezono (once the Hanamuro woods), and Namiki (once the Sasagi woods). 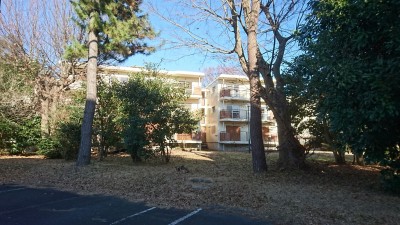 This vintage 1970`s official housing complex (KANSHA) in Matsushiro, Tsukuba, is now boarded up and cordoned off – creating a perfect temporary sanctuary for wild birds! Pass by and have a listen. It`s located just east of the Teshirogi Shopping Center – behind the post-office, across the street.

Times changed, though, and as part of the Japanese government`s (mostly cosmetic) stabs at economic reform, these aging official housing complexes have been coming down, demolished to make way for privately owned, single-family homes. The Takezono and Namiki KANASHA (official housing) have already disappeared without a trace. The Matsushiro houses are now half-gone. Small areas remain though, with boarded up buildings and the land around them fenced off with wire creating a kind of temporary No-man`s Land.  A perfect (yet temporary sanctuary for the birds made habitat-less by all the deforestation in the area (as more and more private housing developments go up). 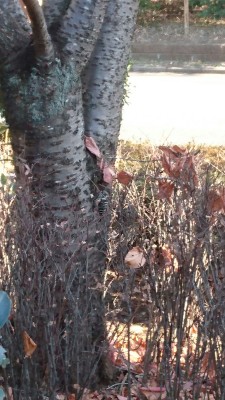 Can you spot the woodpecker on this EGONOKI tree? Look at the crotch, where the forked-trunks meet. There it is, pecking any for grubs.

Passing by in spring and summer was like being outside an aviary. I couldn`t actually see any wildlife, but the continuous twittering of birds – large (pheasant and magpie) and small (bush-warbler and bulbul, etc.) was entrancing.

Then last week, on a bitterly cold, windy winter`s day I passed by on my way to the post-office. I was curious as to what bird calls I would hear. Instead of a song, though, I heard a gentle, rapid-fire rapping (about eight raps per second, I would say) on one of the leafless road-side trees. I froze and scanned it. Nothing. Only the rapping. I stayed still for a few more seconds. Movement. Something tiny, and gray – with stripes! A KOGERA (Japanese pygmy woodpecker) – the first one I`ve ever seen in Tsukuba.

I stood and watch for a while, as the brutal winds stung my face. It moved around skillfully taking up position at another part of the trunk. It peck some more…. and then it flew off.

An encounter of 2 or 3 minutes… but it made my day! 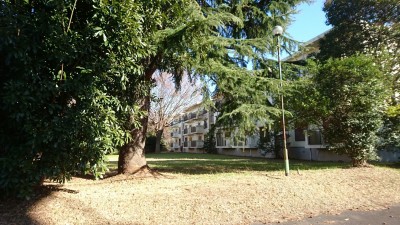