A Lesson to be Learned from the Popular Japanese God Of Good Fortune- EBISU (恵比須) 27 December, 2017

Over the centuries, EBISU, or as he is popularly known as in the Kansai Area ( in Kyoto, Osaka and Hyogo Prefectures) EBE-SAN, has evolved from being what could be called the patron saint of fisherman, into a god of prosperity, popular among both merchants and farmers. He is now counted as one of the SHICHIFUKUJIN ( the SEVEN LUCKY GODS), a group of good-fortune-bearing deities often portrayed riding in a ship, which during the Edo Period (1600-1868) grew to be extremely popular as objects of worship ( and as good luck charms) among the common people.

Most Japanese adults can recognize EBISU from among these seven gods, without having his name written anywhere on him. He can be easilly identified by his distinctive features- the most important of which are a fish in his left hand and a fishing rod in his right. 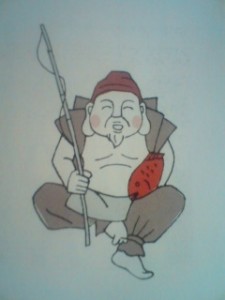 Anyone who lives in Japan has seen his image- most probably on a can of Yebisu Beer ( which way back before the Japanese were familiar with beer, was given that auspicious name in order to help the Japanese public feel feel comforable with this western-style beverage).

So what, you may ask, does Ebisu, the Patron Saint of Business, have to teach us ( as I have suggested in the title of this post)?

Well, from reading about traditional views on Ebisu and what he symbolizes, I have come to realize that this ancient deity represents some very important TRADITIONAL JAPANESE VALUES- a way of thinking which seems to have been largely forgotten by today`s residents of the Japanese archipelago.

What I am talking about is the notion of profiting WITHOUT BEING TOO GREEDY. The idea of always remebering to leave something over for others- the poor, the birds, small animals, or nature itself.

How does Ebisu represent these old values?

By carrying a rod and not a net!

In several texts I have found references to image of Ebisu representing the concept: USE THE ROD- NOT THE NET ( 釣りして網せず, tsurishite-ami sezu), which implies that we should only take what we need, or a little more- but not indiscriminately deplete the environment depriving other living things (and future generations of a means of survival)- or as it is said in Japanese: 暴利をむさぼらないで、bo-ri o musaboranai de!

If the Japanese (and other nations) do not heed this wordlessly expressed teaching of Ebisu, we might not be eating TUNA, or many other varieties of fish very much longer. The fisherman will not be able to carry on their way of life either ( some types of fish have already disappeared off the shores of Japan).

And as for Tsukuba, an area which was once targeted for development because of its abundance of unprofitable marshland and forest, will be COMPLETELY deforested ( besides a few parks) if the people do not speak out for the need to LEAVE SOME OF THE NATURAL LOCAL ECOSYSTEM IN TACT. I am not talking about the parks.  Small areas in which the birds,small mammals, and plants which require deeper forest as a habitat can survive should be set aside.

As I watched the bulldozers clear the last large remaining wooded tracts which stood north of the IIAS Shopping Mall, making room for more housing developments to be built by UR or DAIWA HOUSE, I could not help but think that NOW its the time for the Japanese to remember the old ways and the traditional teachings- and leave a little bit for the birds ( plants and animals).

I hope that the executives of these companies ( as well as others involved in the `development of Tsukuba), people who might even make offerings to EBISU, the God of Business Success, take a closer look at this deity, and think about what he really represents.