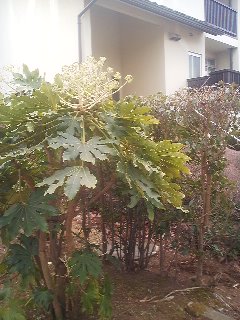 A YATSUDE (Fatsia) as it is commonly  found- in front of a Japanese home. It has impressively large leaves and its white flowers bloom in winter. 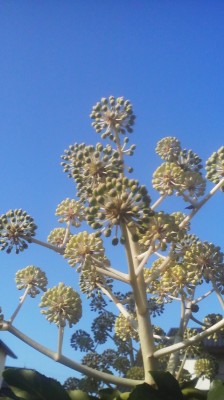 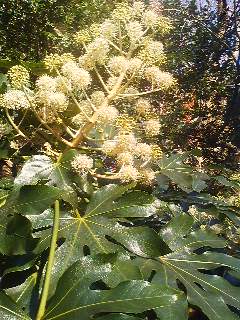 Their large evergreen leaves look like giant outstretched hands which would be useful for welcoming and gathering up good fortune and prosperity. That is one of the reasons  why this shrub, variably called (depending on the region) YATSUDE (八手-Eight-Hand), TENGU NO UCHIWA (天狗の羽内輪- the Mountain Goblin Feather Fan) or ONI NO TE ( 鬼の手- Devil`s Hands) among other names, has long* been one of Japan`s most common household garden plants.

Along with the NANTEN bush (NANDIAN) which bears bright red berries in winter, it is also one of the two major shrubs that the Japanese plant around their homes for good luck. 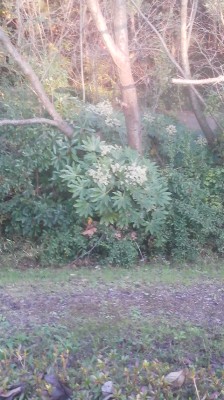 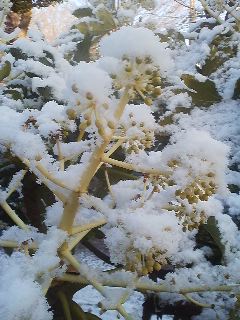 Before I had ever taken a careful look at these impressive plants, I had always assumed that the large, hand-like leaves of the YATSUDE had EIGHT FINGERS. I guess that was only natural- since the two Kanji characters used to write its name 八 and  手 mean: EIGHT and HAND, respectively- and I had always translated this in my mind as HAND OF EIGHT .

I was quite taken aback when I first learned (and then confirmed by repeated observation) that the leaves of this shrub, NEVER had eight fingers- but only 7 or 9.

This is no small point when it comes to the significance and popularity of these plants. You see, in Japan (and other East Asian coutries) ODD NUMBERS are considered lucky- since they can`t be split. And the fact that the fingers are always odd in number gives them another layer of LUCKY SYMBOLISM. 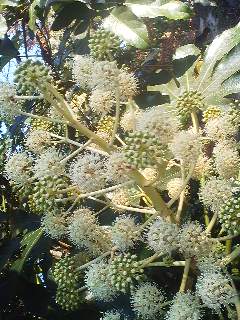 If the “FINGERS” on the leaves are only ever odd numbered, I know, dear reader, that the question on your mind is: Why then, are those plants called HANDS of EIGHT (YATSUDE)?

Well, the character HACHI (八), which does actually mean EIGHT, is in this case used to mean EXPANSIVE or INFINITE- something which is signified by the expanding shape of the Kanji character itself (and come to think of it infinity is also expressed using the Arabic numeral 8 laid over on its side!)

This name, together with the expansive leaves themselves and the fact that they have an odd number of “fingers” makes the YATSUDE an especially auspicious plant- jam-packed with symbolic significance.

It also shows once again that when you take a close look at at almost anything in Japanese culture there are multiple levels of meaning to be found.

(There are also the practical reasons for growing a YATSUDE in your yard- traditionally its dried had been used keep flies away from toilets- YATSUDE can be found growing at old railrpad stations because the leaves were used for this purpose!)

And while YATSUDE are impressive at any time of year, they are especially a pleasure to encounter in winter- when their curious white flowers bloom- beginning in late November.

This is particularly true in late winter (the end of January and early February), when there is little color in Japanese neighborhoods, parks or woods (even the sazanqua have faded by then).

Even in a Japanese botanical garden, they would probably be the most memorable thing you would see outdoors at the end of January- which is the least exciting time of year for a visit.

This was true for my family, in from New York, who took a stroll around the Tsukuba Botanical Garden last week. Among all the dull colors, it was the FATSI** which created the greatest sensation, and left the deepest impression- through its appearance AND its English name!

Keep your eyes open for these shrubs (which can grow to be 2 meters high)- they might bring  a smile to your face while your out in the cold winter wind , with dried-out withered brown vegetation all around. The bold white flowers standing out proudly among the expansive leaves- deeply green, might have you calling to your friends as my parents did the other day- “Hey look- FATSI!” 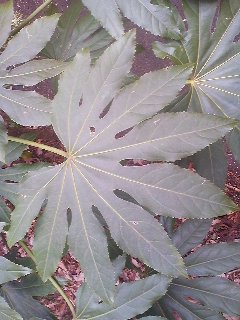 Though their most commonly used Japanese name- YATSUDE might seem to imply that their hand-like leaves have eight fingers- they NEVER DO: There are always either 7 or 9 “FINGERS” which is significant because ODD NUMBERS have long been considered lucky in Japan .

*  YATSUDE became especially popular after the Great Kanto Earthquake of 1923.

** The English name for the plant FATSIA derives from the old pronunciation of the Japanese word HACHI (eight) which was FACHI. 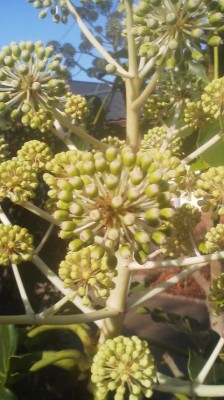