Monument and Small Shrine Dedicated To Tsukuba Residents Who Fell in the Russo-Japanese War of 1905 8 November, 2017

Stone monuments glorifying post-Meiji Restoration (1868) Japan’s war dead were a central feature of Japanese living spaces, having been prominently displayed for maximum exposure, whether in the Capital or in the smallest hamlets. This was a part of the government’s desire to instill in the People a sense of religious reverence for those who died fighting for the emperor. 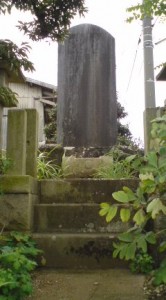 After WWII, however, the Occupation Authorities, in an effort to swing Japan into a new non-militaristic direction (except of course, if it meant fighting communists!), had these monuments destroyed or moved out of plain sight (for the less provocative memorial slabs).

While exploring the backroads of Tsukuba, you will find that each BURAKU or traditional village has its own cenotaphs, large stone slabs with the names of local war dead engraved on them, hidden away in the shadows. Sometimes they are out in the open, but then, they are usually well off the beaten track.

I have recently written about General Maresuke Nogi, who led the Japanese army to victory in the Russo-Japanese War of 1905. This great triumph came at a heavy price: up to 80,000 Japanese dead (not to mention tens of thousands of Russian casualties). The General, who lost his only 2 sons in the war, was ordered not to kill himself in repentance, as he wanted to, since he had been carrying out the will of the emperor.

One way that Nogi tried to atone for the immense loss of life he had helped bring about was the erecting of monuments across the country (and abroad as well) at which the spirits of those fallen could be consoled. 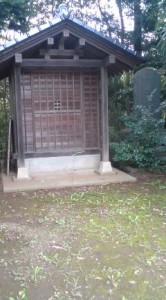 Near the Sakura City Office, in Higashi-Oka, is a shrine-like structure which is a Fudo Worship Hall. About 20 meters south of this building, hidden from view by the shadows cast by surrounding trees, there is another, much smaller, shrine-like structure, which is usually locked. I had often tried to peek through the cracks, but it was always too dark to make out what was being sheltered inside.

One day, as I walked past, I saw the door to the structure open. An elderly woman was sweeping nearby. It turned out that she was the mother-in-law of my acquaintance Mrs Okamino (who was in charge of the Fudo-Ko Ceremony I have written about). 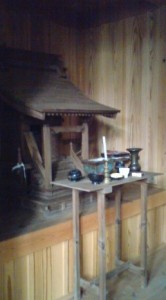 I finally found out what was inside. A small shrine housing the spirit of Lt. Colonel Okamino, the old woman’s grandfather! He was among the dead of 1905. She then pointed out, further into the shadows, a large stone monument to the local men who fell in the Russo-Japanese War.