In the Tsukuba Area MISOPI ( roasted peanuts in miso paste) is NOT Just a Snack! 19 October, 2017 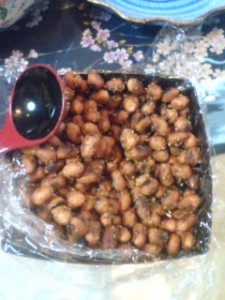 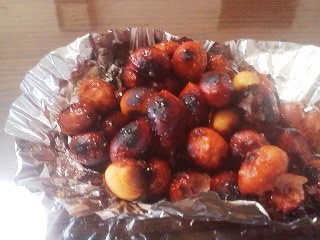 Born and raised in the U.S., I grew up eating lots of peanuts. Sometimes I would crack them out of their shells, but more often I got them out of cans, jars and packets, dry roasted, or roasted in oil and salted. No matter the container or method of preparation, once you started on them it was nearly impossible to stop. They were also an ingredient in a dozen different candybars and other snacks that I used to love.

But the way I MOST OFTEN consumed peanuts was in the form of peanut butter. Coming back from school, I would head right for the kitchen and open a jar of the stuff, preferably the chunky kind. I would spoon it by the heapful onto bagels, bananas, apples, carrots, chocolate bars or just directly into my mouth. I would always make sure to give some to my dog, who seemed to love it , too. It was always amusing to see how she struggled to clear it off her long canine tongue , extending it out far and then pulling it back into her mouth repeatedly, scraping the sticky paste off against her lips.

Besides use as a snack, peanut butter actually becomes the CENTERPIECE of the meal in that classic of American culinary culture- the peanut butter and jelly sandwich. A standard feature of the schoolchilds lunchbox or family`s picnic basket.

Japanese people usually grimace in disgust when I mention these sandwiches, but when I think about it- what a magical combination- with the loose and slippery jam being the perfect foil to the thick and sticky peanut butter,. Imagining it still gets my mouth to water.

Arriving in Japan, I found that the area that I had had come to live, Tsukuba City in Ibaraki Prefecture, was the major peanut ( rakase 落花生) producing region in the country ( with neighboring Chiba Prefecture actually being the no. 1 grower). The many delicious snacks which employ peanuts in novel ( for me) and exciting ways, might even be one of the reasons that I enjoyed living ( and eating) here so much, at first, and why my waistline expanded so rapidly.

One thing that really surprised me, though, was to discover that for the families whose parents have lived in Tsukuba fo generations, peanuts could be served as the O-Kazu, that is the main accompaniment to the rice, and thus the centerpiece of the meal,and not just a snack.

This dish is called misopi- (味噌ピー), and it is popular throughout this region. It is only in the Tsukuba area , however, that it often becomes the main course.

Yesterday, I was at a pot-luck lunch party. One of the guests, Harumi Takaya, brought misopi which she had made using her mothers recipe. It was impossibly delicious, and I had to use all my will power to keep myself from eating the whole thing.

Harumi says that her family eats this dish twice a week and that often when she was a school girl, her lunchbox contained just rice and misopi.

Here is the recipe:

Remove from frying pan and spead out on a dish

Serve on rice ( as they do in Tsukuba)

or eat as a snack

You will be very surprised at the deep flavor which this simple process will bring out.

As alternatives in  the preparation process, the peanuts could be fried in oil, and honey used instead of, or in addition to the sugar. 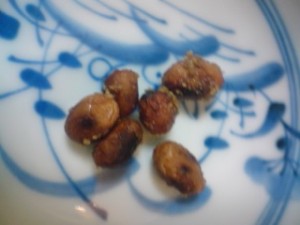