Recipe for a Delicious and Very Easy to Make Okra Dish with a Japanese Accent 6 September, 2017 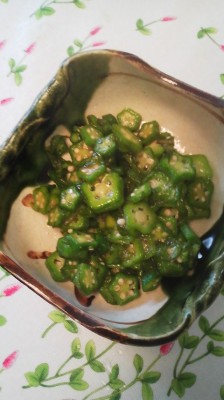 Okra Plants were first introduced to Japan in the early part of the Meiji Period (1868-1912). But despite the fact that their beautifully green pods are very nutritious (packed with vitamins, minerals, dietary fiber and anti-oxidants) and have a very interesting texture (fuzzy on the outside and gooey on the inside) it took more than one hundred years for them to become a common feature of the Japanese table. This is indeed curious for a country like Japan in which it has long been common sense that eating a wide variety of vegetables is important for maintaining health.

What were people doing with okra plants for all those years? Enjoying their flowers, which are comparable in beauty to those of the hibiscus!

It was not until the 1970`s, that the cultivation of okra in Japan for eating got underway in earnest in many parts of Japan (some unique varieties have even bee n developed!). As with many fruits and vegetables (and fish) in Japan, it is most usually enjoyed IN SEASON, which occurs during the hottest time of the year- throughout summer and into early autumn. 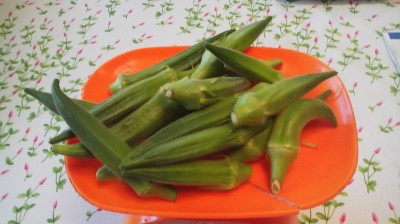 Vegetable gardening is a popular hobby in Tsukuba (and in the rest of Japan, as well), and in mid September many amateur farmers are harvesting bags full of okra on a daily basis. Seeing these plants, replete with ripe pods (and blossoming flowers) can make one feel as if one were in equatorial Africa (where some specialists believe this plant originally comes from). 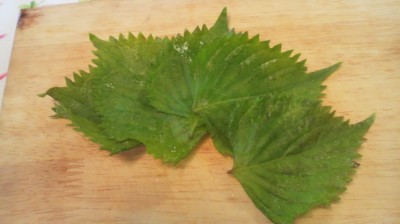 When using that amount of okra used about five shiso leaves

If you do happen to get a gift-bag of okra from a friend or acquaintance with a large surplus, you will have to think of ways of preparing them for eating For me this has been a problem. Though okra is an essential feature of Cajun and other Southern cuisines in the U.S.. I dont believe that I ever tasted this vegetable growing up in New York. I searched the internet for recipes, but recently, my old friend Yamamoto-San introduced me to what is now my absolute favorite way of eating okra- it also happens to be the easiest one to prepare!

Another thing that I like about this dish, besides it being delicious and easy to make, is that it is a very JAPANESE taste which is created. This is because the recipe calls for the use of SHISO LEAVES- an herb which is a distinctive part of Japanese cuisine. 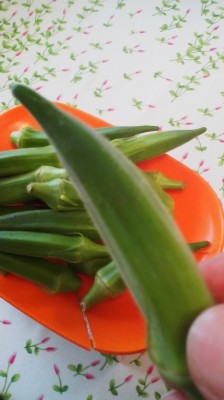 A look at okra`s fuzzy exterior

Her is he recipe for this yet unnamed dish featuring Okra, shiso leaves, and a dash of Japanese noodle dipping sauce: 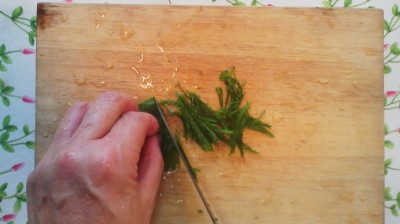 Chopping up the shiso

Wash the okra and boil for 1-2 minutes, then cool immediately with cold water

Cut off the caps (tops) and dispose

Then add a dash of dipping sauce (to taste) 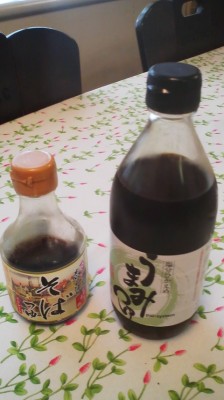 I hope that like me, you find okra and shiso to be a magical combination, and a great way of getting your family to eat a very nutritious vegetable! 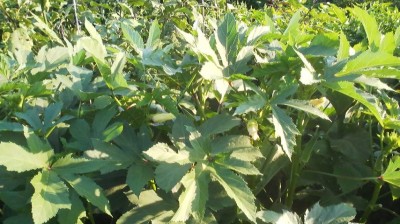 The flower of the okra plant