What is a MANDO-E (万灯会) or MANDO-SAI (万灯祭)? There are some more in Tsukuba this coming Saturday ( Aug.24th ) as there have been all through the month 16 August, 2017 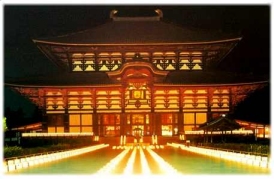 The magnificent Manto-e at the Todai-Ji Temple in Nara

The Taki Taro Mando-e, the Karakasa Mando, the Omido Mando-Sai. And the list goes on and on. During the month of August, there are always numerous traditional ( and traditional style) events in and around Tsukuba City ( and throughout the rest of the country as well), whose names contain the Kanji Characters 万灯, which can be read either as MANDO- or MANTO-.

There are two more such events which will be held this coming weekend  in Tsukuba. One in the village of Mase ( the Mase Mando, 東光寺万燈) and one in Enokiuchi ( the Enokiuchi Mando, 島名榎内愛宕神社の万灯). 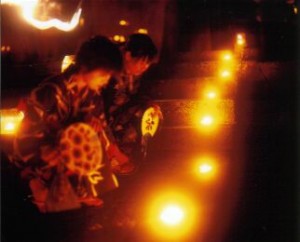 A Manto-e in Hagi, Yamaguchi Prefecture

The question that you might want to ask, however is:  what exactly is a MANDO ceremony or festival? ( though there are probably more of you who have no interest at all !)

Well, let me try to shed a little light on the subject. 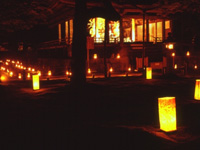 The characters that make up the word which is read Mando literally mean TEN THOUSAND LANTERNS, with MAN 万, meaning ten thousand, and TOH 灯, meaning lamp, lantern, or other artificial source of illumination.

More than meaning exactly ten thousand lanterns, the term could be taken to mean A LOT OF lanterns, though I will later show that there is a specific connection to the term MAN ( ten thousand). 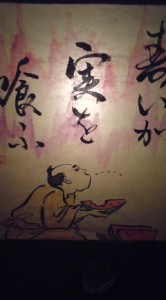 Lanterns made for the Tsunabi event ( Aug 24th) in Tsukubamirai City

Thus, in English, Mando Festivals and ceremonies can be referred to as LANTERN or CANDLE FESTIVALS. At these events, as you can now imagine, many lanterns or candles ( or both) are lit to magically illumine the night.

What, however, is the significance of lanterns or candles?

Lanterns have a deep connection to Buddhism. They were in fact introduced to Japan by Buddhist monks in the 6th century.

More importantly when talking about these events, lanterns or candles, can be used as offerings for the consolation of  the spirits of the Dead ( human or animal).

In Buddhism making such offerings is a common practice, and in Japan, it is especially in summer when the spirits of ones ancestors are given special attention and care.

Illumination? The early Buddhists must have believed that spirits were attracted to light. Lanterns are also usued to guide ones ancestors back home each year for the O-Bon Festival, and then to draw them back to the world beyond by casting lit lanterns off into rivers or the sea.

Lanterns are also lit while ancestral spirits are entertained with Bon dancing.

In fact, lanterns or candles were once a most extravagant offering. Though now setting up a paper lantern might not be much of expense, in former ages with the need of special oils or wax and paper, giving a lantern as an offering cost an arm and a leg.

There is an ancient Buddhist saying that a poor woman`s offering of a lantern is worth a rich man`s ten thousand lanterns ( in terms of merit).

It is this from saying, that the use of the expression MANDO ( ten thousand lanterns) for events in which many lanterns or candles are lit as offerings to departed spirits, probably derives. 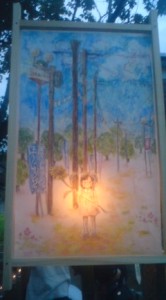 A paper lantern illustrated by local schoolchildren for the TAKI TARO MANDO event in Hojo on Aug. 7th

For Buddhists, making offerings is also an opportunity to beseech the spirits being consoled for some sort of assistance. That is why, at MANDO CEREMONIES it is common to see people writing prayers on the paper walls which make up the lanterns, before lighting them.

Most importantly, lighting lanterns ( or candles) creates a beautiful ( and mysterious) atmosphere.

In the present day, when Mando-Sai are held as community events, it is common for local school children to draw typical images of summer on the lanterns` paper walls- watermelon, eggplant, cucumbers, beetles, crayfish, dragonflies- often executed with surprising skill, adding to the charm of the event.

The first recorded large scale ceremonies involving the lighting of thosands of lanterns or candles ( at what must have been an incredible expense) were held in the year  651, and then many years later in 744. Later, such events became a regular part of the annual ceremonial calendar at many of Japan`s great temples ( Todai-Ji, Yakushi-Ji, Koya-San, etc.)

In Tsukuba, we have nothing to offer on the scale of those venerable temples, by I still do recommend putting on your YUKATA, and catching the magic of a steamy Japanese summer night illumined by paper lanterns.