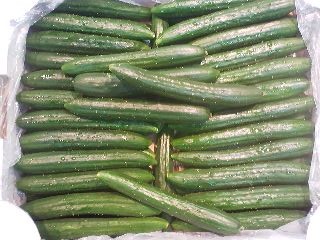 A box of bumpy Ibaraki Prefecture grown cucumbers on sale at a Tsukuba supermarket. Cucumbers (Kyu-ri in Japanese) have a higher percentage of water content than almost any fruit or vegetable (more than 95%) and are eaten in Japan during the hot months to relieve thirst and cool the body down. Besides all the water, cucumbers also contain vitamin C, potassium and carotene

In the English speaking world cucumbers are connected with COOL- as evidenced in the expression COOL AS A CUCUMBER. But the kind of cool being referred to here is the state which is the oppossite of overtly nervous, panicked or upset. It is used to describe someone who is (outwardly) calm, level-headed and collected.

In Japan, however, cucumbers (KYU-RI in Japanese) have long been associated with another type of COOL- the one that is the oppossite of HOT.

Though juice does not drip down your chin when you bite into one, the Japanese realized that cucumbers ARE very juicy- in fact they have just as high percentage of water-content as do watermelon- and that help dissipate the feeling of heat and thirst. 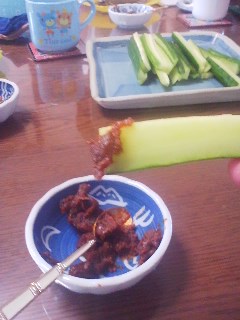 That is why you will find, if you are invited to a Japanese home during the hottest months of the year (July through mid-September), that you will be served cucumbers (often home0grown!) which are meant to be dipped in MISO (fermented soy-bean) paste- are just eaten plain (and they might of course also serve fruits which are more easilly understood as being cooling- watermelon and canteloupe).

And while most Japanese will tell you that during the IN season for cucumbers (from July through October for those grown in Eastern Japan- which includes Tsukuba), these veggies are best eaten raw (with miso), there is amazingly wide variey of preparing them to eat. A visit to any supermarket will reveal a nice sample of what I am talking about.

Here are some of the names of the chilled preserved cucumbers you will find:

FURUTSUKE (古漬け), OSHINKO (おしんこ) and NAMA SHIBATSUKE (生しば漬け,OIKIMCHI (a Korean-style salted cucumber which is sliced and filled with kimchi) among others, while the popular sushi roll which contains not raw fish but cucumbers, is called KAPPA MAKI. The Kappa is an imaginary creature which has long been said to inhabit Japan`s rivers and ponds (sometimes translated as water-sprite, in English) and must have become associated with cucumbers because of their common connection with water- and the fact that in earlier generations Japanese kids would spend the hot months playing in rivers and ponds AND eating cucumbers.

One of the most rustic summer images (in my mind, at least) that you might catch sight of during Japanese summer is a child (or adult, for that matter) munching and crunching on a whole, chilled cucumber skewered on a stick. 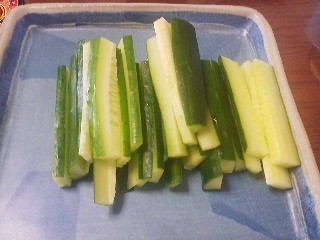 In summer, when you visit a Japanese home you are very likely going to be served cucumber sticks- to be dipped in miso (fermented bean paste) 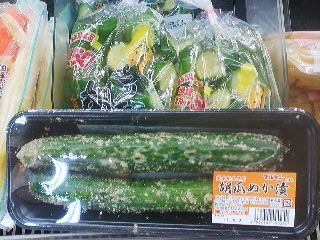 You might find it surprising ( I certainly did!) to learn that this now common and popular vegetable had long been rejected by the Japanese as being not only too bitter to eat- but full of spritual impurites as well. None other than Mito Komon (Tokugawa Mitsukuni, 1628-1701), the greatest scion of the Mito Clan and probably the most important (and well-known) personage associated with what is now Ibaraki Prefecture (within which Tsukuba lies), declared that cucumbers were impure and eating them made you unfit to visit a temple or a shrine. Poisonous and unworthy, he warned that they should not be grown or eaten! 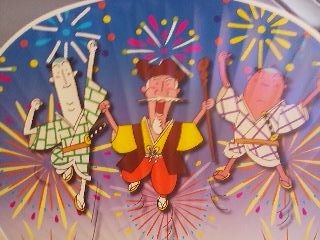 Close-up of a fan depicting the man who has become the symbol (or should I say mascot!) of Ibaraki Prefecture- Tokugawa Mitsukuni- AKA Mito Komon. Mitsukuni recommended that people avoid eating or growing cucumbers!

I guess it is possible that the cucumbers of the past well more bitter and less edible than the improved varieties available today, but maybe the reason for Mito Komon`s strong aversion to cucumbers was the fact that when sliced into small circles, the pattern formed by the seeds resembled the Tokugawa family-crest, which depicts three leaves of the AOI plant.

Maybe he didn`t want anyone eating and swallowing his family`s precious crest! 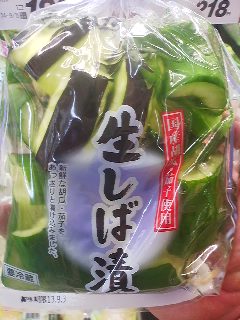 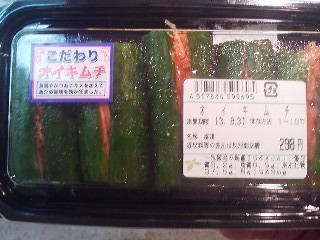 A package of OIKIMCHI – Korean-Style cucumber pickles which are sliced open and stuffed with kimchi- varieties of cucumbers were brought over to Japan from the continent more than 1,000 years ago. Scholars believe that the original cucumber came from the Himlayan foot-hills.

It was only in the late Edo Period (the early to mid 19th century) that cucumbers became an IN vegetable. Two influential books about food which appeared at that time- the WAKAN SANSAI ZU E (和漢三才図会) and the NICHI YO- SHOKU KAN (日養食鑑) declared that cucumbers were not poisonous and in fact helped cool the body, quench thirst and stimulate urination.

At the same time, cucmbers also became sought after as part of the HATSU MONO (初物)- First Harvest craze. You see, it was believed that if you ate the earliest harvested fruits or vegetables (or fish) of a certain crop that your life-span would increase. Because of this, rich merchants paid unbelievably exhorbitant prices for certain HATSU MONO- easpecially famous for this is the fish KATSUO(bonito). The shogunate , in fact, decided to control the early sale of most crops and catches- but cucumbers were not restricted by these laws. And that is one reason for the great rise in their popularity at that time. There was always a competition to get ones hands on the earliest cucumbers of the season. 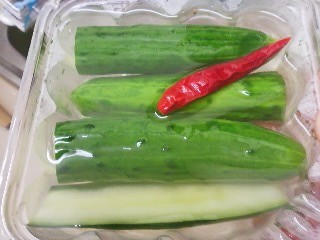 As I write this post I am munching on these cool crunchy Japanese pickles.

So now you will not be surprised when a Japanese friend offers you some raw (or salted) cucumbers in this hottest of times in Japan. Do not hesitate to dip in miso and crunch away- its a time tested way of keeping cool !

And why stop at eating them- Tsukuba is a perfect place to go grow your own Cukes. You can plant seed between March and June. One amazing thing about the plants that you will be able to observe is how they climb- you will need poles or netting to allow them to do so. What you have to keep an eye on is how the stem sends out tentacles which wrap around and cling onto what you set up for them.

If you are planning on going organic you will want to gather up any ladybugs that you may find and bring them to your vegetable patch- they will help contol aphids! 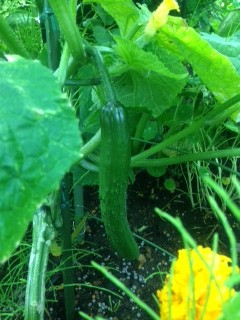 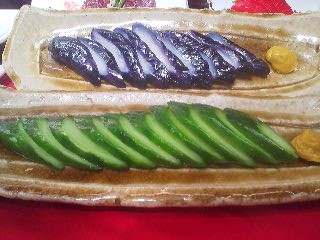 In a display window at a restaurant in Tsukuba- a platter of cooling summer vegetables: cucumber and eggplant