In the Japanese Language HAIL is Called ARARE (霰) in Winter (when it is 5mm or less in diameter) and HYO- (雹) in Summer, when it can fall as big as golfballs or even baseballs- be aware of what you should do if you get caught in the Hyo- (hail)! 18 July, 2017 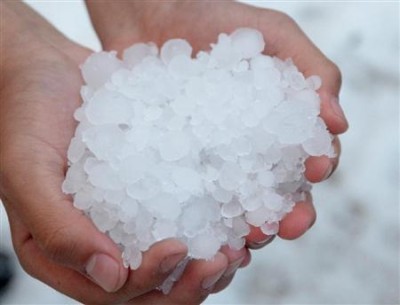 During Japan`s rainy season, it is not just  frequent torrential downpours that you have to worry about- you have have to keep in mind that there also can be an occasional hailstorm. Tonight (July 18, 2017), I turned on the TV and  as I surfed through the channels,  I found that all the stations were showing fantastical scenes of Ikebukuro in Tokyo. I say fantastical because on this warm summers day in some neighborhoods were buried under piles of large hailstones! Windows and outdoor light fixtures had been smashed, car-port roofs shot full of holes, cars pock-marked, and garden plants and vegetables shredded. 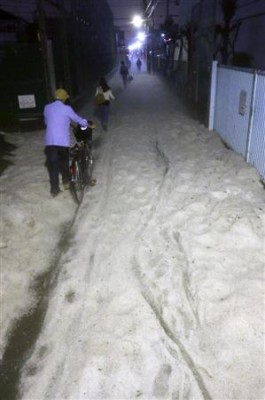 This was certainly the worst case of hail-fall I had ever seen in Japan- but it was not the first. In fact, I have seen ( first-hand) hail right here in Tsukuba on several occasions- sometimes with dangerously large hail-stones that did not melt for days after they had fallen (despite it being early summer)! One does not easily forget the intensity, the roar and the FEAR, whipped up by such storms.. 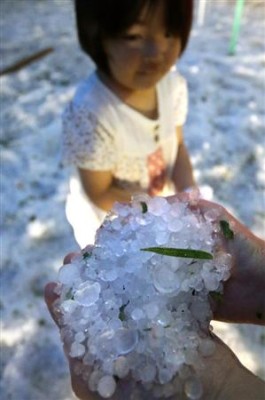 In the same way that the Japanese have words to describe different types of rain* ( indicating not only variations of intensity and duration but also time of year), there are also separate terms for the two main types of hail which fall in Japan – ARARE (pronounced AH RAH HEH), a smaller type (up to five mm in diameter), and HYO- the larger type (larger than 5 mm).

And since the ice that forms in certain late spring and summer clouds tends to be much larger than the same frozen moisture of late autumn and winter- ARARE (the smaller type) has come to be associated with winter, and HYO with summer. These words are used as KIGO seasonal keywords to represent those respective times of year in HAIKU poems. Because HYO (large Hail) tends falls in late spring and summer, agricultural crops are vulnerable to hail-damage (HYO-GAI、 雹害)- especially in and around the Kanto Region of Japan (the archipelago`s largest plain). The largest recorded HYO was recorded in 1917 in Saitama Prefecture- 29.6 CM in diameter (watch out !)

As you have probably already realized, Tsukuba lies smack in the middle of the Kanto Plain, and for that reason there is hail (of varying degrees of severity) almost every year here.In fact, one local woman, the scion of an important farming family, told me that one reason that the Tsukuba area had not been developed before the 1970`s was the fact that there was frequent hail which hindered agriculture (though even if true, the hail would only be ONE of the factors which kept the area from being developed- the main factor being a lack of water for irrigation!)

While the word for smaller hail- ARARE- sounds quite cute (even endearing) and is used in the names of various foods (and other things) containing or consisting of little balls- ARARE ISHI (garden pebbles) ARARE GAYU (porridge), ARARE SOBA (buckwheat noddles) ARARE ZAKE (rice wine) ARARE DOFU (tofu), ARARE MOCHI (rice cakes), ARARE GAI ( a type of shell fish), the word HYO- sounds a bit scary- like the large ice-balls themselves. Apparently, the origin of the word HYO- lies in two Kanji characters, the one for ice and the one for rain- which would be written 氷雨、and would be pronounced HYO-U.

At some point, however, the way of writing HYO- changed to 雹, which consists of to parts- rain (雨)  on top, and wrap (包) on the bottom. This character indicates and understanding of how hail-stones are actually created, as layer upon layer of moisture is frozen to create the large ice-balls- which when cut open look like they are wrapped up in layers.

The kanji character for ARARE (霰), on the other hand has rain on top, and scattering ( as in cherry blossom petals) on the bottom.

Since the Tsukuba area is a HAIL ZONE, you should be aware of what to do when you see ice balls falling around you at great speed.

The most common (and dire) situation is when you are in your car. Hail can dent the it`s body and/or shatter the windshield. That is why when hail starts falling you`d better find cover for your car- and it is not unreasonable to ALWAYS CARRY some blankets to cover your car with in case of a hail emergency. If you find yourself in a big storm without a place to shelter and no blankets, you will have to resort to partially protection with the floor mats or whatever else you might have at hand.

If you you on bike or on foot and it starts hailing- get the hell inside!

After the attack (that`s what it seems like ) is over, you can go outside and marvel at the size of the stones!

I have also written about another of the rainy season`s dangers- lightning- and the particular way it has been viewed in Japan:

* See my article about the variety of words for rain which exist in the Japanese language. The torrential downpours which often fall in the rainy season are referred to as GERIRA GO-U (ゲリラ豪雨)- a guerrilla rainstorm, a term first used by the Yomiuri Shimbun Newspaper in 1968 (though it did not come into common usage until the 2000`s.