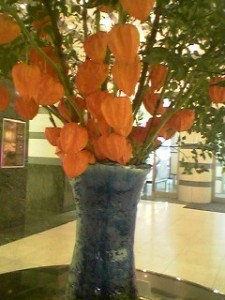 For many Japanese, it goes without saying that worshipping at a Buddhist temple on any given day brings one merit. Some days, however, are special. In fact, according to tradition,  July 9th and 10th ( this coming Sunday and Monday) are VERY SPECIAL INDEED, as dropping in at the Asakusa Kannon will be equivalent to 46,000 regular day visits! This sounds-too-good-to-be-true offer gets even better. From early in the morning to about midnight, hundreds of small stalls will be set up selling hozuki and wind chimes, two classic symbols of July in Japan. Hozuki are delicate, almost translucent, orange pods, which are reminiscent of half-deflated origami balloons. They have traditionally been used as decorations, toys and laxatives! The hozuki market is held in Asakusa because sometime in the 18th century a certain samurai’s attendant is said to have dreamed of the plant’s curative powers which were later confirmed by the amazed local residents. The market has been held ever since, for more than 200 years.

They are bought in the present age mostly as offerings for the spirits of ancestors which are believed to come back home for the O-Bon period. Remember, many in Tokyo and neighboring Kanagawa Prefecture celebrate this festival in July and not in August as most other Japanese do! 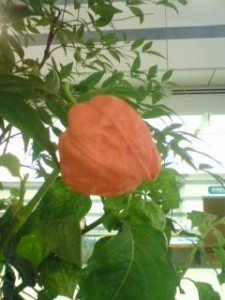 Close-up of a ho-zuki at the Okura in Tsukuba

For those who can’t make it to Asakusa’s Sensoji ( a mere 40 minutes away on TX), have a look at the beautiful hozuki arrangement in the lobby of the Okura Hotel at Tsukuba Center. The lobby flowers are changed every Thursday at the Okura, so you still  have a week enjoy them. I’ll be going EVERY DAY!

For more on the Ho-zuki Ichi in Asakusa see: 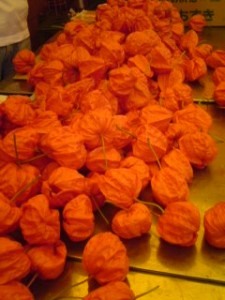 Ho-zuki on sale at Senso-Ji Temple

Last year when I visited Asakusa of July the 9th it was uncomfortably balmy and packed with pilgrims and tourists ( especially Chinese) but I got my lantern plants! 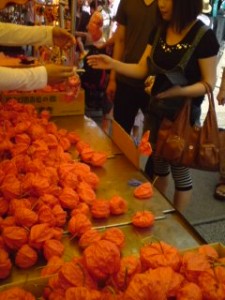 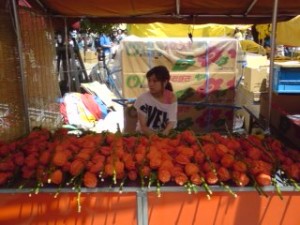 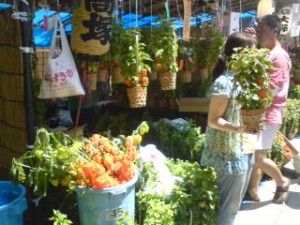