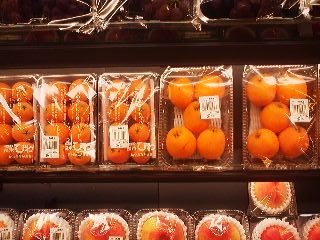 Two varieties of biwa (loquats) on sale at a local supermarket- the smaller ones on the left from Nagasaki Prefecture, and the larger ones from Chiba

In early summer you can see them at Japanese supermarkets, on display in plastic packets, all fuzzy and warmly orange, far outnumbered by the dark red American cherries and the much lighter colored and much more expensive domestic variety.

More strikingly, at the same time of year you can see them ripening, in heavy-looking clusters, on trees in the yards of certain houses in Tsukuba`s (and the rest of Japan`s) old neighborhoods. 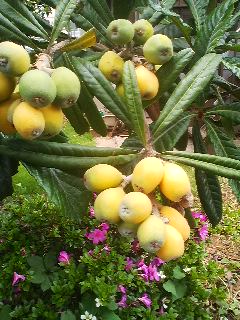 Biwa on a tree in Namiki, Tsukuba – June

They are  BIWA (枇杷) , a name which conjures up exotic images of the BIWA (琵琶), a Japanese lute of Chinese origin (PIPA, in Chinese), which though now rarely seen in Japan was once used to play court music (during the Nara Period 710-794) and then later became strongly associated  with BIWA HO-SHI, traditional wandering performers, who were usually blind. The shape of both the fruit AND the leaves of the BIWA tree are quite similar in shape to the bodies of these ancient instruments- which probably explains the fact that their names are pronounced in the same way (though the characters used to write them are different). The only question is- which was named after which? There are written records attesting to the presence of PIPA (the fruit) in China dating back about 3,000 years. PIPA seeds have also been found in Chinese tombs which are more than two thousand years old. I it seems hard to believe that PIPA (the lutes could be older than that, but apparently they are since a check and recheck of the etymology of the fruit name (PIPA) shows that it derives from the instrument`s name (PIPA).

The pronounciation of these names eventually became BIWA after being introduced to Japan.

The English name for the fruit is LOQUAT, which derives from the Cantonese pronounciation of the characters 枇杷 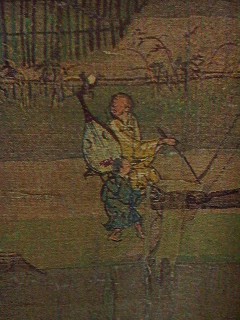 And though biwa trees have been growing in the wild in Japan since ancient times (especially at the western end of Honshu Island in the areas  and outer islands facing the continent), their scientific name- Eriobotrya japonica – is misleading. Scientists seem to be quite certain that PIPA (BIWA, LOQUATS)  originally evolved in and spread out from upper reaches of the Yangtze River in China, in an area where even today many wild loquat trees (with tiny inedible fruit) can be found to  grow.

The reason that japonica is part of scientific name is that the first western scientists to encounter the fruit, did so in Japan and assumed that it was a native species. 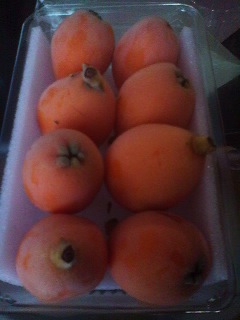 Supermarket bought loquats in their packet. Note that on the top end of the tear-shaped fruit their is the stem, and on the bottom a navel shaped formation.

In Japan, biwa fruit were also mentioned in ancient documents- though of course nothing as old as what has been found in China- but as far back as about 1000 years ago. At that time biwa were probably eaten, but it is not likely that they were a popular fruit. Until the mid-19th century, the areas which are known to have cultivated BIWA- Todomori Mura (in what is now Osaka) in the Kamakura Period (1185-1333),Ta Mura (in what is now Wakayama Prefecture) in the Azuchi Momoyama Period (1573-1603), and Motegi Machi (in Nagasaki City) and Tomiura Machi (in present day Chiba Prefecture) during the Edo Period (1603-1868), all grew the small round type of loquat which had grown in Japan since time immemorial. 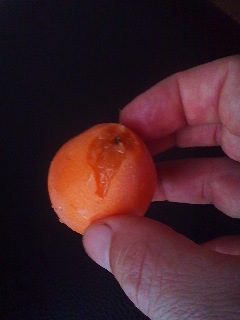 Remove the stem from the top

A great advance in Japanese BIWA production came in the mid-19th century. A woman named Miura Shio (1818-1897) who lived in Nagasaki (the only port in Japan open to foreign trade at that time) got her hands on a BIWA which had been imported from China. She planted the seeds. The trees which grew produced much larger and much better tasting fruit than any BIWA which had ever been grown before in Japan. This variety was called MOTEGI, the name of the village in which it was first propagated.

A Meiji Period botanist, Dr. Tanaka Yoshio, visited Nagasaki and tasted MOTEGI BIWA. In 1880 he brought some of their seeds back to Tokyo and planted them near what is now Tokyo University in Hogo, Tokyo. In 1889, a new variety, one produced from his trees, quite larger than the MOTEGIs were dubbed TANAKA BIWA.

Farmers from Tomoura Machi (in present day Chiba Prefecture), who had been cultivting BIWA since the mid-18th century and selling their crop in Edo (now Tokyo) were very excited by TANAKA`s new variety ( they had been growing the small Japanese type) and quicky strted growing it.

Even today, at supermarkets across Japan, you can see the difference between the varieties- the smaller MOTEGI from Nagasaki, and the larger (and more expensive TANAKA from Chiba. 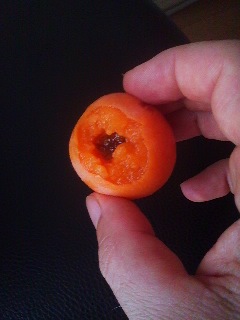 Still BIWA have never come to be produced on a large scale commercially in Japan- except for in Nagasaki and Chiba. In fact

statistic show that if every Japanese were to eat loquats- there would only be THREE fruits per person!

The main problem is that they are difficult to keep after picking and bruise easily. Basically, they should be eaten as quickly as possible after eating. That is why living in Tsukuba can be a great place for tasting BIWA- it is not difficult to get some right off the tree. Try saying hello to someone with a BIWA tree in their yard. Show some interest in the fruit and you are bound to get some.

If you do get your hands on some, remember that when they are chilled they taste less sweet. Eat them at room (or air) temperature. 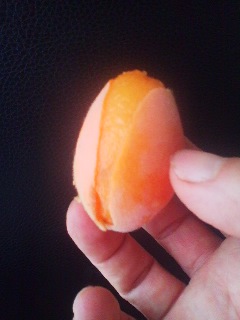 Peel off a strip of the skin

Of course, you could just peel one and nibble around its large pits, but the best way to enjoy a BIWA is probably this:

Remove the stem from the top and dig out the navel-like formation on the bottom.

Peel off the skin

Enjoy the two BIWA halves, one at a time. 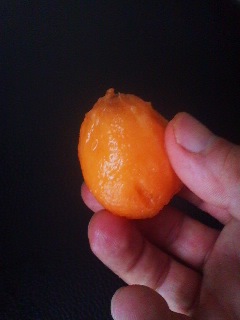 Peel of the rest of the skin. It comes off easily

At their best BIWA are delicately sweet a bit tangy, and very refreshing.

They are also good for you (though if you eat too many you start to feel a bit tranquilized- as I do right now!).

They contain a lot of dietary fiber, pectin and lots of vitamin A. 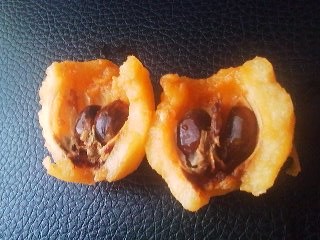 Using both thumbs, split the fruit in half

And it is not only the fruit which provides benefits. Among the Japanese the loquat tree has always been seen more as a provider of medecine than of fruit.

The leaves were (and still are) used to make herbal tea variously called BIWA CHA, BIWA NO HACHA, or  BIWA YO-TO. This was long a common remedy for various ailments and BIWA LEAF TEA SALESMEN were a common feature of the late Edo Period in Kyoto, Wakayama and Edo itself. 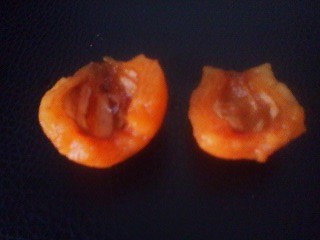 The leaves of the BIWA tree have also been traditionally used to make compresses and to add nutrients to the bath. 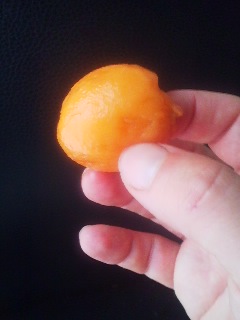 The seeds of the BIWA fruit can sprout easily- even if you just toss them into your backyard. So if you are palnning on being in the same house for a LONG time (more than 8 years) you might want to plant your own BIWA tree. Besides being a nice ornamental tree for your garden,it would guarrantee you access to the freshest fruit- and for home remedies- to its important leaves and seeds. 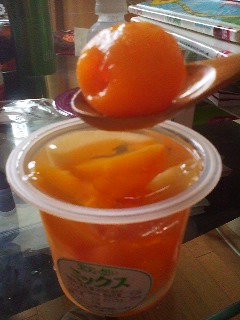 I found this BIWA, peeled, seeded snd stewed, in a cup of Assorted Fruit Jelly available at my local supermarket 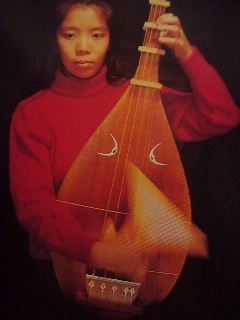 To intensify your BIWA eating experience, you might, like me, enjoy them to the accompaniment of some BIWA (Japanese lute) music. This is Junko Ueda who accompanies herself as she chants scenes fromt the Tale of the Heike