Tsukuba Gets a Face-Lift as Original Official Housing Communities Knocked Down and Residents Scramble to Find New Homes 24 May, 2017 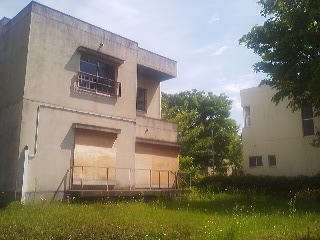 Most of Tsukuba`s 40 year-old official houses and apartments will be demolished within the next year- privately owned structures will go up in their place.

It`s spring in Tsukuba. By night things are just as they have always been, with the sound of  the great frog chorus never very far off in the distance. But the year is 2014, and the Tsukuba Science City has been filled with an inescapable DAYTIME NOISE, despite the fact that it is still much to early for the boisterous cicadas to be out yet. 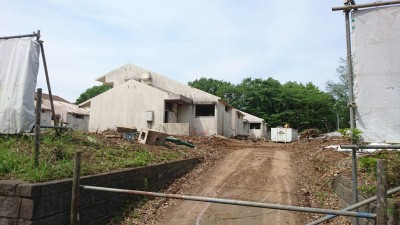 The official housing in Matsushiro being torn down.

You can hear it as you drive,cycle or walk through or near Tsukuba`s old Official housing neighborhoods- Namiki, Takezono, Matsushiro*, all developed more than 40 years ago after the impassable woods had been cut down and the marshes filled in at the sites upon which they now stand.

If you have ever come to Tsukuba as a researcher or professor, you have most probably lived in one these communities.

And whether you loved these Soviet Style houses and apartments ( apparently the model for our city was Akadem Gorodok- the Russian science city located near Novosibirsk), or hated them-  they no doubt have left you a very strong impression ! 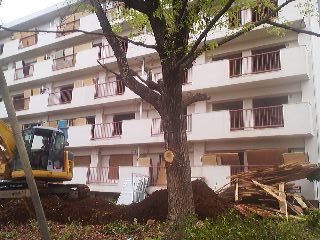 And now all these Palaces of Memory are coming down! The rumbling that can be heard and felt all around is not the sound of repair work or construction- it is the cacaphony caused by the WRECKING CREWS who are skillfully (and quickly) creating flat expanses of soil-covered space where the old residences once stood. These lots will no doubt soon be covered with new PRIVATELY owned homes and apartments.

How quickly it all disappears-  Oh,The Vanity of All Things! 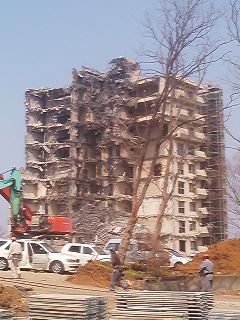 And while there is no doubt in anyones mind that these cheaply constructed dwellings SHOULD BE torn down- with their stubborn mold and mildew and leaky roofs, their being condemned has put a lot of folks to great inconvenience.

Many who have for years or even decades lived in these well located AND extremely cheap residences now have to move out and find REAL housing.

This has brought about the biggest Tsukuba real-estate boom since the TX Line was completed in 2005, with a rush on to buy a condominium or have a house built. 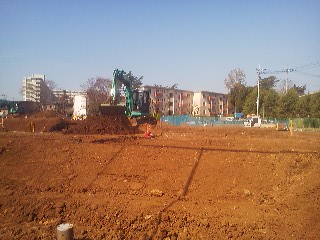 Planned obsolescence has always played an important role in Japan- it has long been used to make sure that carpenters, lumber-salesmen and priests (and now construction companies and priest- who bless the land for a nice fee) are always busy.

The Japanese did not attempt to build structures that lasted forever – and rarely used stone.

Japanese structures, whether, farm-houses, palaces or temples were made of wood, straw and paper. They had to be rebuilt at regular intervals.

The most famous regularly scheduled reconstruction is that of the Ise Grand Shrine which is rebuilt every 20 year (most recently this year!)

Its obvious that the need to knock down the old official houses and replace them with new buildings is a big economic shot in the arm to many in the area. 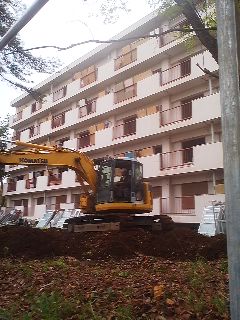 I just hope that they leave one or two of the old KANSHA (官舎), as official housing is called in Japan, as a testament to the days when the PIONEERS, the original researchers and teachers who were sent to live in Tsukuba when it was still considered to be a hardship posting- a special subsidy was actually given to any national worker who was stationed here it was so inconvenient (despite its proximity to Tokyo)! 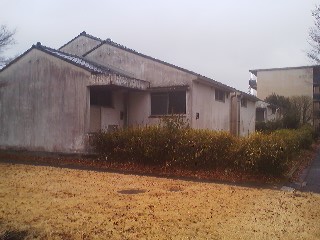 Interestingly, the Tsukuba KANSHA have also been used to house refugees from the area contaminated after the nuclear accident in Fukushima. Apparently they will be able to stay on a few months longer than most employees of the national government who will have to clear out of their digs by next April . 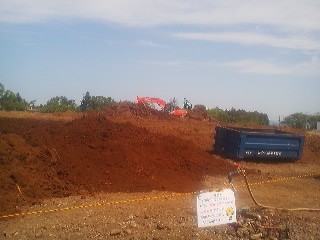 There IS one good point though in having to move out just before the buildings are demolished- those who are leaving do not have to go through the usual damage checks on the residences which are notoriously thorough, ridiculously strict ( in that even the normal wear and tear of time is counted as damage caused by the tenant) and painfully expensive. 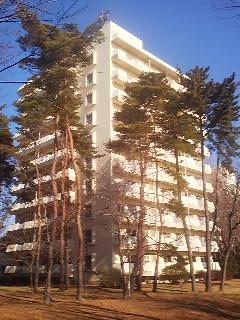 Official apartment house surrounded by some red pine, a tiny remnant of the forests which had long occupied most of what is now the Science City.

The first  housing community in the new Tsukuba Science City was completed in 1972 in the village of Hanamuro- it was renamed TAKEZONO, when the first PIONEERS ( mostly researchers for the Disaster Prevention Research Institute and the High Energy Physics Laboratory) moved in. This was soon followed by new communities in Teshirogi ( called Matsushiro) and in Sasagi ( called Namiki)