Japan`s Pretty little HEBI-ICHIGO (literally, snake strawberries) Are NOT Eaten By Snakes, NOT Poisonous and NOT Very Tasty, But Some Old-Timers Believe They Have Medicinal Powers 18 May, 2017 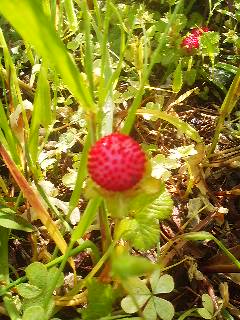 Hebi-Ichigo in Matsushiro, Tsukuba in May 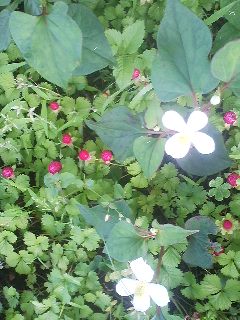 The ground covered in HEBI ICHIGO and DOKUDAMI (Nakano, in Tsukuba`s Yatabe area)

The bright red, round  little  berries which grow so commonly at ground level  by Japan`s aze-michi ( 畦道, the paths around or between the paddy fields), and also in wild fields, or around houses (there are hundreds in my garden!) do not enjoy a very good reputation, and in fact are the subject of slanderous rumors. For me though, they are a delight, as first, their little yellow five-petalled flowers appear in April, and then give way to the temptingly succulent looking deep-red fruits which beckon like little lanterns from among the surrounding weeds and grasses.

The reaction they elicit from my Japanese neighbors or friends is mostly negative. Most often, they tell me ( and will tell you, too) that these berries are poisonous, or that they are eaten by snakes ! In fact,  they are NOT poisonous at all (and of course not included in the diet of any snake!), and though  their lack of any strong flavor is a serious let down considering how enticing they look, they can be eaten, and I have found some older people around Japan who say that these fruits have certain medicinal powers. 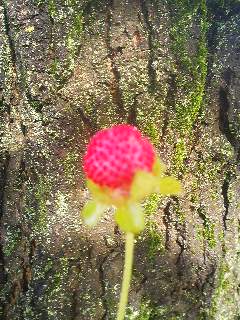 May 21 – A hebi-Ichigo in Kajibatake Koen Park in Matsushiro, Tsukuba 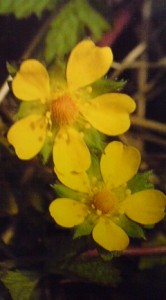 I think that the negative image associated with this plant can be attributed in large part to its  name in Japanese-  HEBI ICHIGO, which literally translates as SNAKE STRAWBERRIES ( their scientific name is Duchesnea chrysantha, a member of the rose family). It seems that this name was taken directly from the Chinese name for the same plant ( the characters are- 蛇苺), though I have not been able to determine why the Chinese associated it with snakes . One possibility is that poisonous snakes would wait near the berries to prey on small animals which were attracted by them, making the hebi ichigo a warning sign for the possible presence of snakes. My own feeling, however, is  that the fact that the hebi ichigo GROW CLOSE TO THE GROUND and this makes them like snakes, which are the animals which symbolize living in the dirt (since they have no legs). 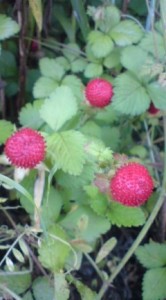 Hebi Ichigo in my old yard in Konda, Tsukuba

No matter what the reason, the naming of these little fruits after a frightening (to most people) creature, has surely played a major part in the creation of the misconceptions regarding them.

In past generations the Japanese recognized the medicinal powers of the hebi ichigo (in China, the entire plant was used for various herbal remedies). 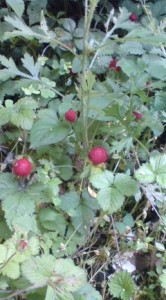 It was said that eating the berries kept infectious disease away. I have read the account of an old woman in Miyazaki Prefecture who claimed that she never fell prey to any epidemics (densenbyo), because each summer she gobbled up the hebi ichigo in her neighborhood. I have also found prescriptions recorded in folk- remedy encyclopedias showing how hebi ichigo can be used to treat various ailments. For hemmorhoids (ji),  directly apply the juice to the sore spot(!). This can also be done with the transluscent liquid that can be obtained by putting the berries in a jar and leaving them for a while. For toothaches, you can mash the leaves of the hebi-ichigo plant with salt and apply the resulting paste to the tooth. For rheumatism you can eat the berries plain, and for diarrhea, you can eat the berries which were  pickled with sugar in shochu liquor.

Please do not imagine that anyone you meet actually uses hebi ichigo in these ways anymore (but you never know!). This is only natural, since Japan has become extremely rich in available foodstuffs. there are plenty of more delicious ways of getting your vitamins and, of course, drugstores full of remedies for every possible ailment. 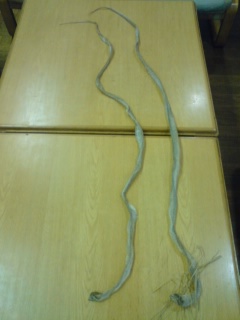 Still, you might want to bend down and admire these beautiful plants, and you might even want to sample one (or  more!) . Maybe you can even think of a recipe that would put them to good use. If you do, please tell me about it- my yard is full of them! Maybe thats why a big snake lives there too !

I have also written about a Japanese film entitled Hebi Ichigo. Read the article here: