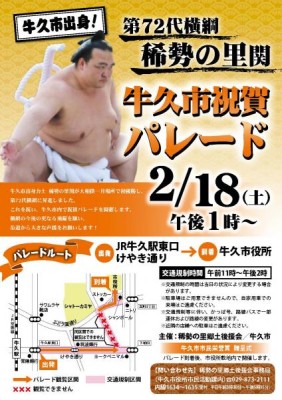 Kisenosato, the first Japanese born sumo wrestler in 18 years to be named a Yokozuna (Grand Champion) grew up in Ryugasaki and Ushiku – Tsukuba`s immediate neighbors to the south. Come share in the local pride and jubilation on February 18, 2017, as Kisenosato and his stable-mates move in a triumphant procession from the eastern side of Ushiku Station (on the Joban Line) to the Ushiku City Office. Starting time is 1 pm.

For those Japanese who care about such things – and there are many of them – it has been a long wait. Nineteen years since the last Japanese-born sumo wrestler has held the title of Yokozuna – Grand Champion. That`s how long the Mongolian wrestlers have dominated Sumo`s highest rank.

It has also been a long wait for those of us who, like me, have been rooting for our local favorite, Kisenosato, to finally win a tournament and get promoted to Sumo`s highest rank. 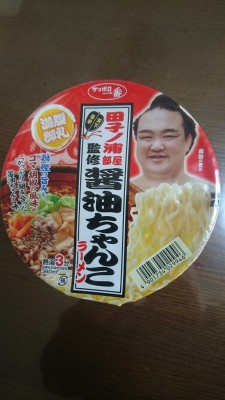 A bowl of Kisenosato “instant chanko ramen”. Now that he has been promoted to the rank of Yokozuna, this might very well become a valuable collector`s item

Though born in Ashiya, Hyogo Prefecture, Kisenosato (real name; Yutaka Hagiwara) grew up near Tsukuba – in Ushiku and Ryugasaki (our neighbors to the south) – and he has plenty of supporters  who have been cheering him on over the years (He first entered the ring professionally in in 2002 and was promoted to Ozeki in 2012). I include myself among them. We have been a strong, enthusiastic and noisy presence at the National Sumo Stadium in Ryogoku, one reason for that being how easy and fast it is for us to get there from Tsuchiura and Ushiku using the Joban Line. In fact, he has so many fans at the stadium that I have NEVER been able to get a Kisenosato lunch-box (the official vendors at the stadium sell different bento-boxes featuring the popular wrestlers` favorite dishes)- because they are always sold out so quickly. I always have to settle for the less popular lunch-boxes (i.e. the ones representing some foreign-born wrestlers!)

After many years of just-misses championships, heartbreak and disappointment, though, fans like me had mostly given up on him ever winning a title, let alone becoming a Grand Champion!

But at the age of 30, he finally did it – and all of south Ibaraki has gone crazy!

For the past several weeks it`s been Kisenosato Mania ! 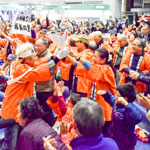 On January 27th, 18,000 people showed up at the Meiji Jingu Shrine in Tokyo for the Dohyo Iri Ceremony, initiating Kisenosato as the 72nd wrestler ever to have earned the rank of Yokozuna

You can share in the jubilation tomorrow, Saturday February 18, 2017, as a triumphant procession will move from Ushiku Station`s eastern entrance to the Ushiku City Office

Also sharing in the limelight these days has been Kisenosato`s stablemate Takayasu, a native of Tsuchiura, Tsukuba`s  neighbor to the east.

Maybe I`ll see you there! 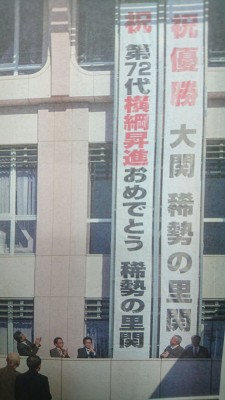 These banners had been celebrating Kiswnosato`s victory were made up years ago – but couldn`t be used until 2017! 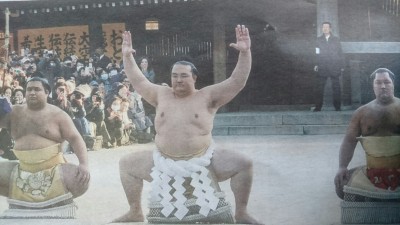 Kisenosato performing the Dohyo Iri Ceremony (initiating him as a Grand Champion) at the Meiji Jingu Shrine in Tokyo on January 27th 2017. There was a huge crowd of 18,000 fans on hand – including the mayor of Ushiku. On the left of this newspaper photo, holding the sword, is Takayasu, whose home-town is Tsuchiura! 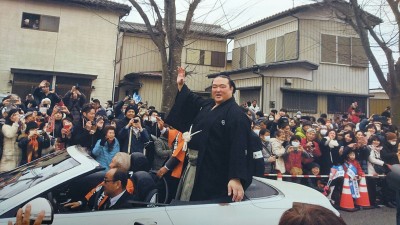 Riding in a white Mecedes-Benz convertable, local hero Kisenosato was taken from Ushiku Station to the City Hall where he was honored. The crowds that lined the streets shouted “Congratulations” and “Number one in Japan” as he passed by, all smiles. It took about 40 minutes to travel less than a kilometer! 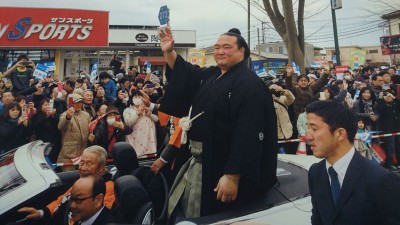 A jubilant crowd endured long waits on a cold and gloomy day for a chance to catch a glimpse of and cheer on Kisenosato. 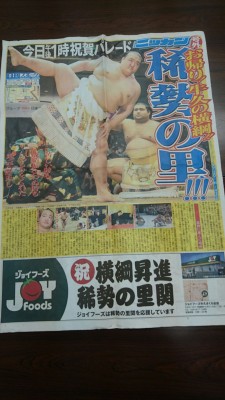 This special edition newspaper was handed out in Ushiku to those who came for the parade – it makes for a nice souvenir. Squatting behind the newly promoted Yokozuna is Takayasu, born and raised in Tsuchiura (Tsukuba`s immediate neighbor to the east), to a Filipino mother and a Japanese father. He belongs to the same Tagonoura Stable as Kisenosato. Interestingly, Takayasu is his real family name and not a ring name (SHIKONA).