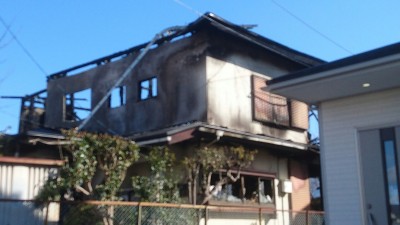 House gutted by fire in the early hours of Wednesday January 18th. Just behind the Mercedes-Benz dealer along Nishi-Odori, in Ninomiya, Tsukuba. A 77 year-old man, sleeping upstairs. Despite arriving on the scene almost immediately after having been notified, the fire-men, I learned from neighbors, were unable to find a water source for their hoses, for more than 30 minutes.

With its very dry air and the wide-spread use of kerosene stoves winter is the “fire season” in Japan. Every evening you can here the fire-truck slowly driving around town, ringing their bell and warning people to put our their fires (i.e. heaters) before they go to bed.

At 4:40 in the morning on Wednesday January 18th, you might have been awakened by the raucous cries of sirens. A house on fire. A single family house just behind the big Mercedes-Benz dealer on Nishi-odori, one of Tsukuba`s major thoroughfares.

The fire-men arrived on the scene in minutes… so far, so good. But then they hit a snag…. they could find a fire-hydrant. Neighbors told me that it took more than 30 minutes to find a water source. The fire wasn`t officially declare exstinguished until 5:59. It was very fortunate that there were no strong winds at the time… that would have been disastrous in the densely packed neighborhood of wooden houses (the fire-department dodged a bullet… but they`d better do a survey of hydrants soon!)

The house was lost, of course…and later it was discovered that a 77 year old resident had died, upstairs on the second floor where the fire apparently broke out.

His wife, who had been sleping downstairs, was able to safely get away.

The cause of the fire is still under investigation.