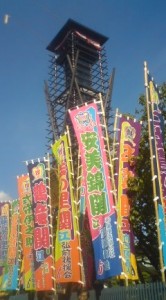 For most Japanese, Ryogoku (両国), a neighborhood situated on the eastern bank of the Sumida River in Tokyo, is synonymous with sumo wrestling. Not only is the green-roofed National Sumo Stadium located there, where three two-week long, nationally televised tournaments (basho) are held each year, but so are the major stables (sumo beya), at which the wrestlers live and train. That means that Japan`s national sport can be experienced in some way NOT ONLY in the stadium itself during tournaments- but the streets of that area themselves are literally ALIVE with sumo.! Young wrestlers can be seen walking through the streets at any time of year, strutting their stuff- always extremely photogenic in their colorful YUKATA robes, special hair-dos, and hefty physiques. 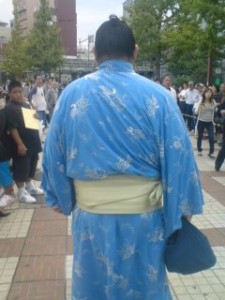 And despite all the recent scandals: match- fixing, drugs, abusive training methods, and the fact that the sport is now dominated by foreign wrestlers ( a native-born Japanese has not won a tournament in nearly TEN YEARS!)-  all which have combined  to bring about a major decrease in sumo`s popularity among Japanese – during each of the two-week tournaments held in Tokyo ( in January, May, and September), Ryogoku is an exciting place to be. Even if you dont want ( or can`t afford) to get into the stadium itself and watch the matches.

Its fun just to arrive in the early afternoon and hang out around the the stadium`s entrance. The atmoshere grows quite festive as the crowd of people ( tourists from around Japan and local sumo fanatics) waiting to cheer on the wrestlers as they arrive for work grows bigger and bigger. As each RIKISHI ( as sumo wrestlers are known in Japanese) appears, he is cheered on ( with the more famous wrestlers getting much bigger reactions of course!) There is usually one older man ( who I have seen every time Ive been there) who has memorized many of the RIKISHI`s birthplaces, weights, and other vital information, which he proceeds to shout out, fuelled on by lots of enthusiasm and plenty of alcohol, as each one approaches! 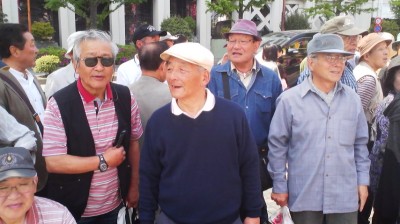 These are some of the REGULARS who stand outside the stadium calling out the names, ages, hometowns and weights of the RIKISHI as they come in for work. 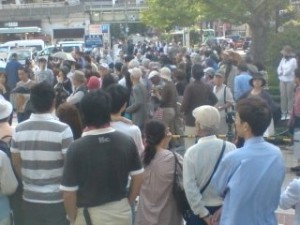 There is usually lots more to see as well among the crowd- political activists asking for signatures on petitions ( today there were people  working for Taiwanese independance from China (both the Republic and the People`s Republic!), and some girls who wanted one wrestler, recently banned for match-fixing, reinstated), foreign tourists from around the world, and the usual assortment of lunatics and madmen ( today there was a women of a certain age, flamboyantly dressed, twirling around with outstretched arms, singing old songs!) 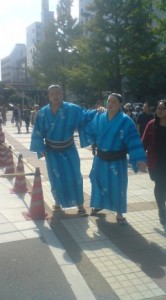 A limping wrestler get some help from a friend

But I guess there is nothing more interesting than seeing the wrestlers themselves, some of them household names, and most, forever to be unknown – but each looking great in their traditional get-ups. 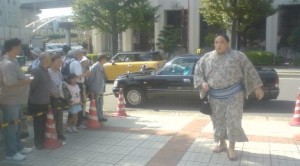 Arriving at the Stadium by taxi

Oh, and you could also get a ticket and go see the matches. Despite all the trouble the sport had been encountering in recent years they have been doing a lot of PR work and seem to be especially focusing on drawing in foreign tourists – who having been helping to keep the seats filled. Language should be no problem when buying tickets.

For Japanese who might be wary of recent stories of sumo-yakuza connections, a voice on a loudspeaker continuously assures us that members of VIOLENT ORGANIZATIONS ( boryoku-dan, as the yakuza of often referred to as) are not welcome at the stadium. 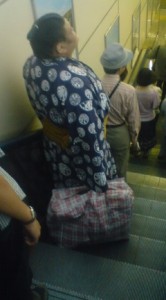 On the escalator at Ryogoku Station

Check on line to see if tickets are available – and if you have the notion, head down to Ryogoku through  January 22, 2017 –  which will be the last day of the New Year`s Tournament). The box office is open from 10 AM to 4 PM. 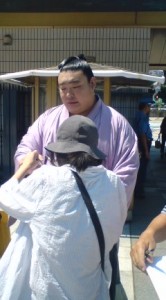 A lucky woman gets an autograph 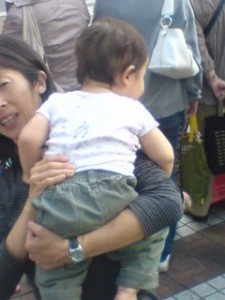 If you haven`t got a piece of paper handy for an autograph, have them sign your baby!

And though it is probably best to visit Ryogoku while a sumo tournament is on, there are enough interesting sights within the immediate vicinity of  the station to make a visit to that neighborhood worthwhile at any time of year.

First and most famously for foreigners is the Edo-Tokyo Museum, in which the visitor can get a glimpse, with the help of various exhibits, of what life was like in the great city while Japan was still ruled by the Shogun.

They also put on several excellent special exhibitions every year ( I have written about some of them on Tsukublog, for instance this article:http://blog.alientimes.org/2009/01/rankin-by-palanquin/).

The book store and gift shop at the museum are also excellent ( especially for those who read Japanese), and sometimes I make a special visit to Tokyo just to do some shopping there.

You can find out what`s going on at the museum here ( in English): 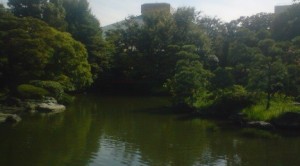 On a fine day, it is nice to take a little stroll throught the Former Yasuda Gardens (旧安田庭園, Kyu-Yasuda Teien), which is located just past the sumo stadium if you are coming from the station. Now owned and managed by the Sumida Ward, this garden was first established by a feudal lord who had been granted land on the spot in the late 17th century. Using the Sumida to fill a  pond shaped to form the character for KOKORO (心）, meaning heart or spirit, the water levels rose with the ebb and flow of the river. The spot was later bought by the founder of the Yasuda Zaibatsu, after the fall of the Shogunate, during the years the Meiji Emperor`s reign. Entrance is free.

Don`t expect very much, but it is a nice place to take a break and there are some interesting elements to look for in this typical Meiji-Period style garden. You might even spot an egret wading about in the pond. 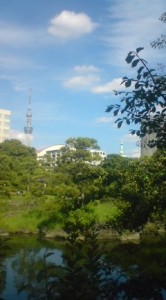 Beyond the Yasuda Garden you can see the Skytree Tower (on the left), and the Memorial Temple for the area`s two great disasters- the earthquake of 1923 and the air-raid of 1945 ( the steeple on the right) 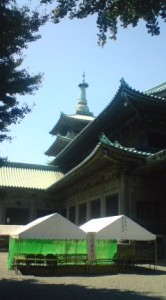 The Tokyo-To Irei Do ( 東京都慰霊堂), a memorial temple and museum dedicated to the victims of Tokyo`s two most terrible disasters

Continuing up further away from the station, you will find a large temple which commemorates Tokyo`s two most terrible disasters, the Great Kanto Earthquake of 1923, and the Great Air-Raid of March 10th, 1945( which both hit this neighborhood especially hard). There is an interesting museum in a separate building which I have written about before: 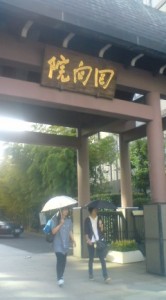 The main entrance to the Ekoin Temple, which is used to tend for the sprits of both humans and animals 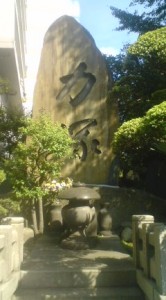 This stands on the grounds of the Ekoin Temple (回向院), and commerates the fact that sumo tournament were long held on this temples grounds

Don`t let the Irei-Do Memorial Temple give you the wrong impression. Though the two disasters commemorated there were horrific, they were not the only two catastrophes of that scale to hit this area. There were quite a few others. These, however, occurred while the city was still Edo, and not yet Tokyo ( and thus not commemorated at the Irei-Do).

If you backtrack a bit towards the station, and then continue on to the end of the road, you will come to a temple , Eko-In, which is deeply connected with these earlier tragedies, as well as with the history of Sumo.

First established as the mass burial site for the victims (100,000 of them) of the Great Fire of 1657, and then used as a place to inter many of those who died in the Great Ansei Earthquake of 1855 ( among other disasters), this always crowded temple is interesting for the fact that it serves as a place to attend to the spirits of both humans AND pets ( in separate buildings, though).

It was on the grounds of this temple that before a proper stadium was built the sumo tournaments were held. 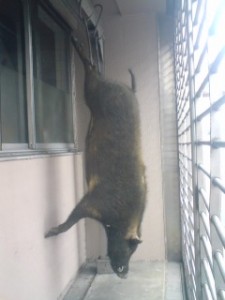 A wild boar hangs from a hook outside of Momonjia- a restaurant which has been serving game ( boar, venison, raccoon) for more than 200 years 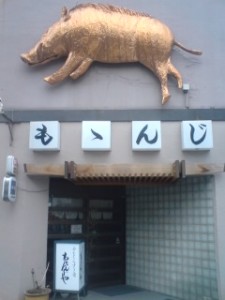 The entrance to Momonjia, facing the Sumida River

If you find yourself getting hungry after all this exploring ( and if you are not a vegetarian) walk back out the temple`s main gate and turn left towards the river. A large wild boar carcass hanging in the window will tell you that you have reached Momonjia- one of Tokyo`s oldest restaurants. There you can dine on fresh game- boar, venison and even raccoon.

More popular for visitors to Ryogoku are the Chanko-Nabe Restaurants near the station. Since chanko nabe stews what  sumo wrestlers regularly eat, you know they must be nutritious and FILLING!

After eating (or before!), those familiar with Japan`s most famous (true) story of samurai loyalty and revengeーthe Chushingura- will want to see whats left of the old Kira Kozukenosuke Manor ( 吉良上野介義央の邸跡). It was there that the insult to, and subsequent death of the Lord Ako was avenged by his loyal retainers. Kira was killed here, and his head washed in the well that you can still see on the grounds today ( it might be better to see this before lunch!)

You can find the remains of manor just to the east of the Eko-In Temple ( that means heading to the right if you leave the temple`s main gate).

And oh! I forgot to mention. On most days of the year ( though not on the last weekends of Tokyo tournaments), the Sumo Museum, located within the precincts of the National Sumo Stadium, is open for -FREE. There, in a single room, are exhibited some sumo memorabilia and photos of ALL past yokozuna ( grand champions). What should be interesting for residents of Tsukuba is the fact that one great wrestler of the past was born and raised in what in Tsukuba ( at the foot of Mt Tsukuba)- and had the sumo name Minanogawa (男女ノ川), after the river which flows down from between Mt Tsukuba`s two peaks ( the river made famous by a poem in the Hyakunin-Isshu collection of poems). 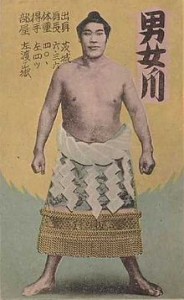 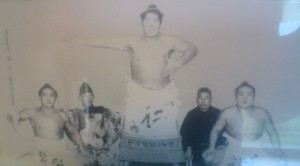 This photo of Grand champion Minanogawa hangs at the Shakai Fukushi Senta Community Center near the Oike Pond in Hojo, Tsukuba

To get to Ryogoku from Tsukuba, take the TX to Akihabara. Get out and take the Sobu line for two stops and get out.