Over the centuries the Japanese have had various ways of recognizing and celebrating a young persons COMING OF AGE (  see my previous article ) , however, since the year 1877 ( Meiji 9 ) the notion of what it means to be an adult was standardized and a UNIVERSAL LEGAL AGE  has been set at 20.

In recent years ( beginning back in 1948) there has even been a National Holiday(originally held  each year on January 15th, but since the year 2000 on the second Monday of January) on which 20-year-olds are celebrated and encouraged to become good citizens.

Normally this holiday ( SEIJIN NO HI) brings to mind images of young people gathered at the city office in a wide array of finery ( with plenty of beautiful kimonos) and  hair-dos.

As for the NEW ADULTS  themselves, among all the priviledges of becoming legal, the greatest of which is surely the RIGHT TO VOTE, the one that is clearly adopted with the most enthusiasm is the RIGHT TO DRINK.

It is very interesting to note , however, that the legal drinking ( and smoking ) ages were not set back in 1877 when the current legal age ( of adulthood in general) had been first established. It was not until 1922 that minors were prohibited from consuming alcohol ( for tobacco, restrictions were set in 1900), and this happened only after more than 20 years of legislative battling ( limiting the number of drinkers would reduce the tax revenues need to fund Japan`s military .

That is why each year on the night`s of the Seijin Shiki (the coming of age ceremony), when I encounter festively dressed and raucously drunken groups of new SEIJIN ( adults) celebrating their LEGALITY, I cant help but think of Sho Nemoto ( 根本正, 1851-1933), a son of rural Ibaraki ( our own prefecture) who went on to become one of modern Japan`s most interesting and important ( though now almost completely forgotten) law-makers. It was Nemoto`s 23 years of dogged determination which eventually led to the passing of the Juvenile Alcohol Act in 1922.

Nemoto`s story is fascinating and I have encountered his name and face ( in sculpture) in connection with various  themes I have studied in Japan ( education, emigration, the romaji writing system, etc).

Let me give you a very brief profile of the man ( there is VERY little on him available in English) and  I will  present a more detailed picture of his life and work at a later date. 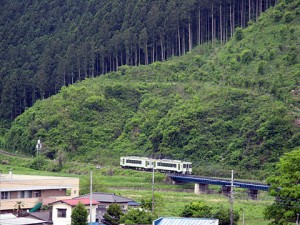 Construction of the Suigun Line (which runs from Mito, the capital of Ibaraki Prefecture to Koriyama in Fukushima) was Promoted By Sho Nemoto

Nemoto was born in what is now Naka City ( in Ibaraki Prefecture) to a family with connections to the Mito Clan. His grandfather, who was his first teacher, had been a village headman and was known for his learning. At the age of 13 the scholastically gifted boy, thanks to family connections, went to study and work ( as a low-ranking retainer of the clan) in Mito with some of that period`s great scholars.

At the age of 16, he had a look at some matches and  a clock which had been brought back to Japan from the Paris Exhibition ( the original Expo, which many years later ( 1985) was held right here in Tsukuba!) . This was a life changing experience for him. He later wrote: These were clearly made by very intelligent people- the sideways writing people ( Japanese and Chinese were written vertically). I must study this sideways script and I would very much like to visit such a fabulous place (Europe, or the West).

At the age of 20, Nemoto left Mito, which had been devastated by the civil war which had raged between various factions, and he set out for Tokyo with the aim of furthering his studies. He did this without his parents permission and for some time had to support himself by pulling a rickshaw at night.

After improving his English with the help of contact with various foreigners he met while working in the newly created Western-style postal system, Nemoto was given the opportunity of going to study in the US, and he arrived there in 1879 ( at San Fransisco) and matriculated as a very old ( at almost 30 years of age) elementary school student ( he also completed his junior high school studies in the US, before going on to college).

(It is my opinion that Nemoto`s , the older school boy, was later ued as the model for Oka Sayye, a character in a viciously racist  ( by today`s standards ) novel entitled: Her Father`s Daughter ( 1921), by the once popular American writer Gene Stratton-Porter. This outrageous tale  ends up with Oka being pushed off a cliff, and thus ending the odious threat which he and his kind posed to the American way of life !)

Nemoto then went on to study at the University of Vermont, after being taken under the wing of Frederick Billings. He graduated in 1889 and returned to Japan ( after travelling through Europe), and having been encouraged by his American sponsors to try to MAKE A DIFFERENCE back in his home country, he ran for office and eventually served in the National Diet for 25 years ( 1899-1924).

While serving in office, Nemoto had a MAJOR impact on his country. This is evidenced by the legislation which he fought for and eventually had passed as law.

The Juvenile Smoking Law ( no smoking for minors)

The Juvenile Drinking Law ( no drinking alcohol for minors)

He also pushed for the construction of the Suigun train line ( which runs from Mito to Daigo),

and encouraged the emigration of Japanese to Brazil (and other South American countries).

I would like to go into more detail in regard to each of his contributions and to provide some illuminating anecdotes from my own experiences in Japan, related to the laws which he helped shape. I promise I will return to the subject of this UNIQUE  Japanese politician.

Let me just finish today with this, from Nemoto`s own writings ( after retirement):

We are happy to know that the Emperor of Japan does not take any alcoholic beverages, nor is he a user of tobacco. This was much praised when Count Futaara in an address, stated the reply of the Crown Prince when asked why he did not take wine on his trip to Europe: His Majesty
replied: Wine or sake is useless.

On the same voyage Rear-Admiral Yamamoto asked His Highness who was then Crown Prince, why he did not smoke? His Majesty replied, “Yamamoto, Do you not know The Anti-Smoking law for Minors ?” His Majesty was not then twenty years of age. The Rear-Admiral was mortified and shamed by the instructive answer of the Crown Prince.

Recently His Highness, Prince Chichibu and the Princess made a trip to the North. The Governor of Fukushima Prefecture made careful preparation to entertain His Highness, and among other things sent to Nada, near Kobe, five hundred miles away where the best grapes in Japan are grown, for a supply of wine. But his Highness did not touch a drop of wine of any sort.

His temperate life may be due in part at least, to the influence of his consort who was educated in a Friend’s School in the United states.

It is not surprising that a man so much under the sway of American ( and Christian) thought, be intentonally forgotten during the years of ultra-nationalism and militarism in the 1930`s.  But it is sad to find that his name is still all but unknown among the Japanese ( even Ibarakians). It was shocking for me to find that even in the Ibaraki Encyclopedia, the reading of his name is given incorrectly ( it calls him Nemoto Tadashi).

I think it about time that this man`s reputation be REHABILLITATED and for his proper place in Japanese history ( as the law-maker who introduced free universal education) to be restored and proclaimed to all.