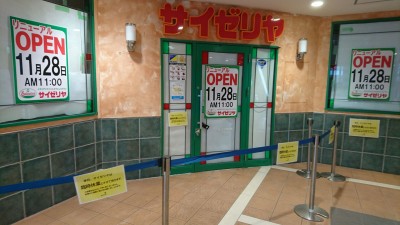 On November 11th at about 3:00 PM, several simultaneous calls came into Tsuchiura City`s 110 emergency hot-line –   “There are customers here having a fight!” and “There`s a man on fire!” among them. Fire-alarms went off at the train-station and at all the shop at the Station Building. People evacuated the premises. Police-cars, fire-trucks and ambulances  rushed to the scene. There was pandemonium. And it had all started in inside the station`s branch of Saizeriya, a popular “family-restaurant” chain.

A man and a woman were rushed to the hospital  –  both of them suffering from severe full-body burns.

I arrived at Tsuchiura Station by bus the next day. I was on my way to Ibaraki History Musem in Mito,  the prefectural capital,  which I was going to reach by train (and bus). I was surprised to find lots of police in the area – and the entrance to the Saizeriya restaurant roped off with yellow, crime-scene tape.

I asked some of the sales-women at the supermarket next door what had happened.

This is what I found out:

According to witnesses, a man in his fifties and women in her thirties, both of them non-Japanese, were sitting in one of the booths when they started arguing about something. Things eventually grew heated… very heated – the man  poured an oil-like substance over the woman and himself and then set it on fire.

The man, 52 years old and a citizen of Iran, died of his burns in the early hours of the next morning (November 12th). His female companion, 36 years old and from the Philippines, remains in critical condition.

Fortunately, no other people were injured, despite the fact that the restaurant had been full of customers. No doubt though, many of those who witnessed the scene will bear psychological and emotional scars for the rest of their days.

A few day later I found out a little more. The two had been arguing about a child. Apparently they had once been married or at least romantically involved – and a child was born. I guess there was a falling out because at Saizeriya on that fateful day, the father was demanding access or visitation rights with his son or daughter….

Well, now the father is dead – and the mother is in intensive care with full body burns.

What happens to the child? No one seems to know….. 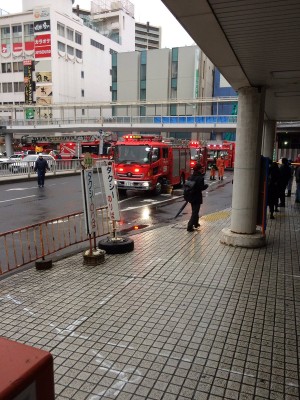 Fire-trucks outside the Tsuchiura Station building at about 3:30 PM on November 11, 2016. After an argument a man set himself and the estranged mother of his child on fire while they were at SAIZERIYA family-restaurant.