Japan`s Great (and surprising) Circus History- and the impact of Japanese artistes on the circus world 23 December, 2016 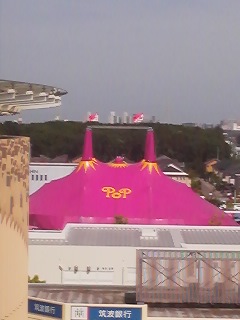 The circus is in Tsukuba again (2016-17) thru January 29th. This time the tent is outside the Aeon Mall Tsukuba and NOT IIAS Mall (where it has been in past years)

The circus is in town ! The other day, when I noticed the big pink and white tent set up in the parking lot of the Aeon Shopping Mall in Tsukuba, memories from my childhood came flooding back- just about every year my family would take my sister and I to Madison Square Garden in New York to see the GREATEST SHOW ON EARTH, as it was called- The Ringling Brothers Barnum and Bailey Circus ( though THAT was NOT in a tent)……. the trapeze, the tightrope, the lion-tamer, the elephants the jugglers, the clowns……….. 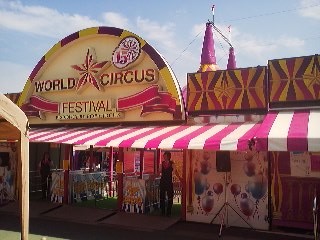 To tell the truth we never did have very good seats, and everything ( there were so many acts on at a time) seemed so distant. But I had amassed a great collection of  program booklets with pictures of the old circuses that I would often leaf through at home. These has left an indelible impression on me.

Along with these flashes of reminiscence, all the deeply rooted cultural associations also came to mind- Dumbo, Pinnochio, Paggliacci, and all the movie and cartoon circuses I had grown up with- images deeply rooted in the Western psyche.

Then, stopping by to get some information about prices and how long the show would be running. I saw on a leaflet how many foreign acts were involved in this Japanese circus troupe- Americans, Chinese, Cubans, Chinese. Spaniards, Slovaks, Chileans, Argentines……

Well, I know that circuses have always been international, but I was a little sad that NO ONE REMEMBERS anymore the days when JAPANESE ARTISTES and CIRCUS ACTS played a  major role in the great the circuses of the world and had an invaluable impact on the circus arts in Europe and America. 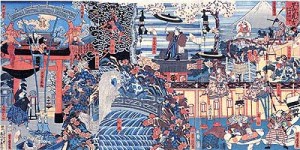 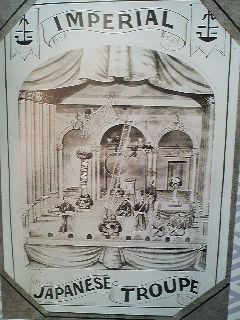 Though now we do NOT associate Japan with circuses, in the 19th century, most Americans or Europeans who actually saw a Japanese, did so at the circus.

In fact, the first groups of Japanese to be allowed to travel abroad after centuries of national seclusion were CIRCUS TROUPES! You might be surprised to learn ( I certainly was), that in 1864, four years before the fall of the Shogunate, an American Circus troupe was allowed into Japan to perform in Yokohama. This of course caused a great sensation, attracting many of Japan`s own great balancing artistes, jugglers, contortionists, top spinners, and conjurers. The leader of the foreign troupe, Richard Risley, was very impressed (amazed) at the skill pf the Japanese performers and had the notion of taking these Japanese on tour abroad.

Permission was granted, and it ended up that several Japanese circus style groups would tour the world doing their stuff. It made the international press, when one Japanese woman performer after having an affair with a member of a different Japanese troupe got pregnant and had a baby in London. The child was touted as the first Japanese ever born abroad!

Meanwhile after the Meiji Restoration in Japan foreign circuses continued to cause a sensation- the Emperor Meji himself, so delighted with the first performance he attended presented the ring-master with 5,000 Dollars worth of gold! 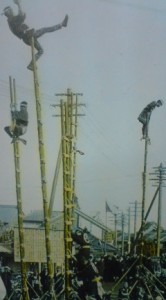 The Japanese style circus arts  flourished during the Edo Period (1600-1868), which is not surprising since such entertainments always thrive under regimes which strictly control ideas ( such as the People`s Republic of China, or the Soviet Union). In acrobatics and juggling there is NO CONTENT, no dangerous thoughts, nothing to censor- only amazing entertainment.

Many of the special techniques used by the Japanese performers originated in China and even India and after having  been brought over to Japan ( often by Buddhist priests and ascetics) they were honed and refined. 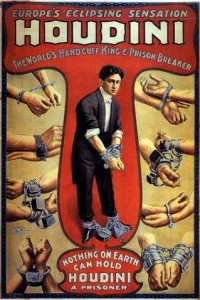 The great Harry Houdini, learned a technique which was FUNDAMENTAL to his spectacular success from a Japanese circus performer- a member of the San Kitchi Akimoto Balancing Act

I was astounded to learn ( from several biographies) that Harry Houdini, the great magician and escape artist ( and one of the great entertainers of all-time) learned a fundamental skill from a member of a Japanese troupe working in a foreign circus in the 1890`s. In fact, without this skill, the ability to swallow something and then bring it back up at will, Houdini would never have become the great escape artist that he was ( Houdini  always had himself body-searched before he performed an escape-but he was able to conceal essential tools by swallowing them!). Thanks to the San Kich Akimoto troupe Houdini was able to become the great American hero that he was.

The world of Juggling was also greatly affected by the Japanese. A type of juggling with sticks and balls called the Awata style had a great impact on many of Europe`s greatest circus performers.

Taking a look at an old Ringling Brothers Route Book ( 1892), I was surprised by HOW MANY Japanese were part of the show. There were the quaint Japanese contortions of Little San, the top spinning pastimes of Ando Hama Kichi, Miss Okee and her ladder of swords,Miss Oume the Japanese Fantasist who also did a rope act, etc. etc. etc………. see all the details here: 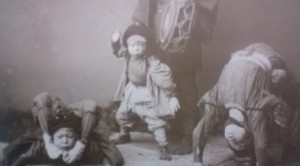 Ironically, the typical Japanese style circus arts have faded away over the years, and the Japanese artistes were eventually Westernized. The only time I have ever seen anything like traditional acrobatics in Japan is at the New Year`s DEZOME, the firemen festivals ( and at the Tsukumai festival in Ryugasaki, Ibaraki).

And don`t forget to check out the Pop Circus while its here in Tsukuba ( in the parking lot of the Aeon Tsukuba Mall) until January 29th.

There are other types of tickets available as well. The schedule is also a little conplex. Look here:

It will be a good chance to admire ( and ooh and aah at)  just what it is possible for the human body to do ( with plenty of inborn talent, determination, and years of grueling training!)

Take the kids. They will leave with something they`ll never forget ! 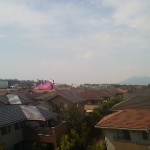 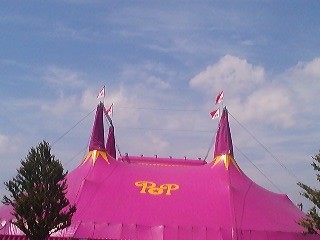 The Pop Circus in Tsukuba 2011 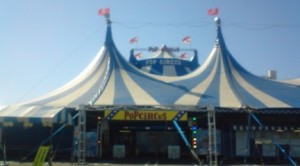 I never did get to see the circus back in 2011- the Great East Japan Earthquake struck before I had gotten the chance. As you can imagine, after that disaster had paralyzed Tsukuba for a few days (weeks) they decided to pack up and head for somewhere else. 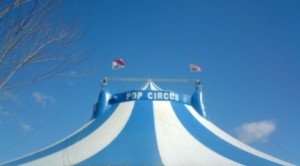