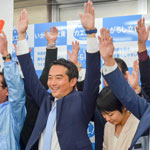 Tatsuo Igarashi, Tsukuba`s new mayor, celebrates his victory – as his wife bows in humble thanks to supporters (November 13, 2016). Igarashi is a 38 year old father of four, affiliated with Tsukuba`s Citizen Network (SHIMIN NETO WA-KU), and not a major political party, he promises to “listen to the voice of the people”, make life easier for young families with kids, and create better day-care centers, kindergartens and children`s halls (JIDO-KAN). He has also said he would look into why our water-bills are so high here in Tsukuba (Halleluya!). His victory signifies the ascendancy of the New Resident (SHIN JU-MIN) Tsukubans (those who moved here from all over Japan after the Science City was established in the 1970`s), over the more traditional and conservative local residents – whose families have lived here for generations – and who strongly support the LDP (Liberal Democrat Party). He will be the first mayor that can understand the lives of usual people and families, since the first three the city has had have been scions of powerful local families : Mayors Fujisawa, Kimura and Ichihara, respectively

With the blaring of greetings and the waving of white-gloved hands from “loud-speaker trucks”  being the preferred method of campaigning in Japan, elections can be very noisy and conspicuous affairs. This year though, Tsukuba City`s municipal elections. held on November 13th, came and went pretty much “under the radar”. With my senses frayed to the point of numbness by the goings on of the American Presidential Election, the long months leading up to it,  the day itself and then its aftermath (I learned an obscure Ibaraki Dialect expression meaning “absurd” or “ridiculous” when I overheard a local farmer expressing his thoughts on the  American Presidential Debates – “MUGI MO NEH ! “) – I hardly noticed the local electioneering at all 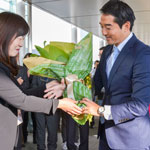 First day at City Hall – After 12 year of scandal-plagued, Kenichi Ichihara as our mayor, a welcome new face. Igarashi is known as a good speaker and excellent organizer. He runs an NPO called the GOKIGEN FARM that provides subscribers (like me) with organic vegetables. He has also served two terms as a city councilman. He is a graduate of Tsukuba University and lives in Umezono.

But as I was compulsively and rhythmically surfing thru the channels (in a Trump-induced daze) on the night of the 13th, I saw a sight which surprised me (and many other Tsukubans, as well) almost as much the final U.S. electoral vote count result I had seen on my smart-phone screen a few days earlier – Tatsuo Igarashi, the child of “New-resident” parents, had defeated the “local” candidate, by about 4,500 votes! Amazing ! Though, I strongly prefer Igarashi, I never thought he could beat the local political machine which I was sure would get all the people from Tsukuba`s older neighborhoods to go and vote (I remember how impressive it was when I lived in Hojo, near the foot of Mt. Tsukuba, all the old ladies in the neighborhood would dress up and put on make up, and walk together to the polling place to vote for Mayor Ichihara  – as if it were a festival!)

I guess Mr. Iioka, a crony of former Mayor Ichihara, just lacked the charisma to rally the usual support – or was it the fact that people had just gotten fed up with Ichihara and were ready for something new? Hmmm. Probably not. One of my friends who had attended a rally for Iioka said how worried people were about Igarashi`s youth – and the danger of him being influenced by Communists ( indicative of how suspicious most locals are of the “new-residents” – revealing a divide in Tsukuba not very different from that which separates the traditional Blue and Red States in the U.S. – with the local people representing the American South and Mid-west and the new-residents, America`s so-called Bi-coastal Elite)

But maybe it was just former Mayor Ichihara`s greed that brought about the defeat of his protogee (and an end to the LDP`s long hold on Tsukuba). By promoting more and more development, and turning Tsukuba into a bed-town, the LDP connected Ichihara and his crew have put themselves in a difficult spot with demographics – the new-comers to Tsukuba just don`t want a local yokel as a mayor. Not even Ichihara`s absorption of the Kukizaki area (with almost no new-residents) into the city limits could counter the booming population of new-comers brought into the city thanks to Ichihara`s (very profitable to him and his relatives) development schemes.

Anyway, how ever it came to be, Igarashi`s victory represents a political revolution in way. After decades of being run by large land-owning local old men, Tsukuba has a refreshing new face in city hall. Let`s hope he finds a way to deal with all the “tradtional connections” City Hall has had with various construction companies etc. (to which large portions of the city budget are usually funnelled). It`s surely going to be tough going for such a young “outsider” to learn the ropes of his new office. 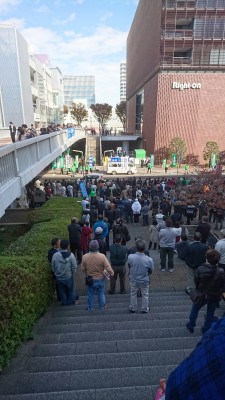 A group of “locals” at a rally to support Igarashi`s rival, Mr. Hiroyuki Iioka. The speakers were trying to get the crowd riled up by suggesting that the “outsider” Igarashi might be susceptible to the influence of the Communist Party – I kid you not – that strategy did not go very well though, as Iioka lost by about 4,500 votes. Very low voter-turnout shows how little enthusiasm this candidate was able to whip up.