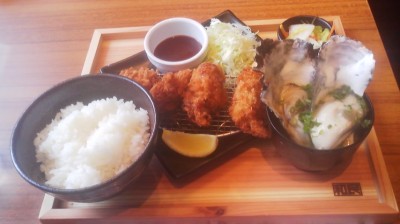 An oyster “set-lunch” including both raw and fried oysters for less than 900 yen at WATAMI, a restaurant inside the new BIVI Building in Tsukuba

Japan is a great country for eating. And because freshness and seasonality are such important aspects of Japanese food culture, a good way of optimizing your dining experience in this country is by always being aware of what`s IN SEASON. You can ask your Japanese friends and acquantances (or your waiter or supermarket staff) about this by asking : IMA WA NANI GA SHOON DESU KA? (今は何が旬ですか？)

If you ask a typical Japanese that question in mid-November, you`ll get a funny answer – KAKI (柿) and KAKI (牡蠣)* – persimmons and oysters! The former grow just about everywhere in Tsukuba (and the rest of Japan),  and besides being an important everyday taste of the season, their trees weighed down by the richly-hued orange fruit, are an essential feature of the autumn landscape.

Oysters, on the other hand, are not harvested locally. If you mention KAKI (the shellfish) to a Japanese friend or acquaintance they are most likely to think of Hiroshima Prefecture. 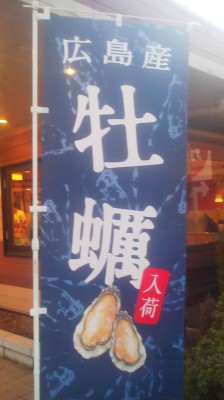 A banner promoting oysters from Hiroshima at Gusto, a so-called “family-restaurant” near Tsukuba Center

And while in the past ages you would have had to be in Hiroshima (and by the sea) to partake of these special delicacies, with modern refrigeration and transport – plus oyster breeding farms which can meet the huge demand, we can now enjoy Hiroshima oysters just about anywhere in Japan – for very,very reasonable prices (you can have a beautifully presented, delicious, skillfully served, nutrition oyster set for less than the price of a flavorless sandwich and fizzy drink in New York!)

In fact, there are so many restaurants serving oysters this November at such low cost that that`s just about all I`ve been eating these days!

And while I`m sure that most Japanese have not been eating as many oysters as I`ve been eating these days, they probably want to have oysters at least once – to celebrate the season! (There are those people, of course, who will NEVER have oysters again after having had a bout of food poisoning caused by raw oysters in the past.)

One friend told me: “When the weather starts turning chilly, I get the urge to have oysters.”

In fact, the “season” lasts through the winter. 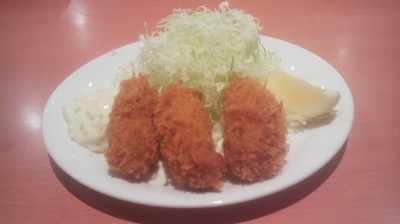 You can order a side-dish of fried oysters at Denny`s – or you can go with a more elaborate oyster set, if you like.

Interestingly, here in Ibaraki Prefecture the local people CANNOT differentiate between these two words. To make themselves clear, they will say KUDAMONO NO KAKI (Kaki the fruit) and KAI NO KAKI (Kaki the shellfish).