Autumn is the Time for Tsukuba`s Farmers to Dry Out the GOMA (SESAME) 3 October, 2016 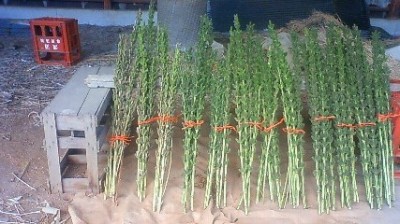 Sesame plants, bundled up and propped up to dry (Tsukuba)

Walking through Tsukuba`s old neighborhoods in late September through October, peeking inside the walled compounds of the grand old houses, you will more than likely see leaning against a wall, some curious stalks, straight and  tall, tied up in a few bundles – with some mats spread out beneath them. A closer look reveals that these plants, instead of leaves, have curious pod-like attachments sticking out and pointing up all along their stalks.

If you didn`t recognize these plants, you could ask the farmer, if he/she were present, just what they were ( as I did). And I am sure you would be just as surprised as I was to hear the answer.

Sesame (GOMA in Japanese)- one of the oldest ( and important) crops cultivated by man – grown in ancient Egypt, Mesopotamia, India and China – for oil, cosmetics, medicine. A crop that has become such a common part of our food culture ( and I mean just about every major food culture that I know of)- found on bread, bagels and crackers, sprinkled on or mixed in with  rice, ground into savory nutritious pastes, squeezed into oil or made into dressings and sauces, that we take it completely for granted. It is ironic that few non-farmers can recognize the plant from which it comes- I certainly couldn`t. 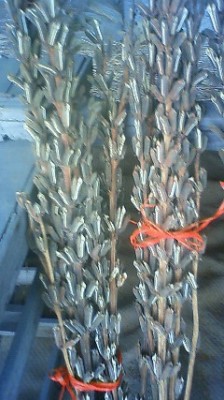 A close-up of the sesame plants- the seeds are inside the pods which open as they dry (as in OPEN SESAME!)

Sesame is a fundamental component of Japanese cuisine- sprinkled on rice (as FURIKAKE), used as a seasoning for vegetable dishes (called GOMA AE) its oil is also used for tempura ( often as a mixture with canola oil). It is also used to make the distinctively Buddhist food GOMA DOFU (tofu make of sesame), sesame pudding, and even sesame-flavored milk!

It is a bit surprising that the seeds which provide a very distinctive Japanese flavour originate in Africa  and actually reached the Japanese archipelago somehow, more than 2,600 years ago- remains of sesame seeds have been found at archaeological sites in Japan which can be dated to the Jomon Period. No one is exactly sure of how these seeds were exactly used at that time, but it would be a good guess to say that they were pressed into oil. 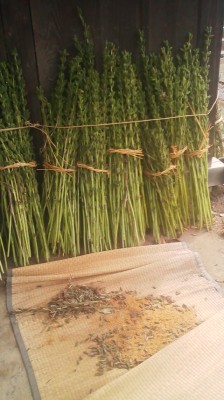 More sesame set out to dry- in Tsukuba`s Hanamuro neighborhood

Sesame used to be a major crop in Japan, but now this country has become the number one importer in the world of these nutritious, oily, and very tasty seeds- with the great majority of them coming from Myanmar (something I found surprising!).

The farmers (professional and amateur) who still do grow sesame in Japan, do so on a very small scale and for their own consumption.

They cut the stalks just as the pods start breaking open, and them leave then to dry, leaning against a wall with some sort of sheet underneath. Over the next few days (and weeks) the pods will open, dumping their seeds onto the sheets. 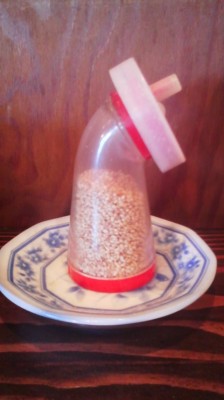 At a ramen restaurant- sesame for sprinkling on your noodles

If you are lucky, while on a stroll, you might find a friendly farmer to give you a handful of fresh sesame for you to roast for yourself ( if you don`t roast the seeds they are virtually tasteless).

I have read that there are certain families in certain parts of Japan who DO not, grow sesame ( and by that I mean that it is their family`s common sense NOT to grow that crop). This might be due to the fact that growing sesame for a few years in succession can badly deplete the nutrition in a field`s soil.

Another reason could be that the Japanese word for seasame- GOMA- is a homophone for an important Buddhist ceremony cally GOMA TAKI. 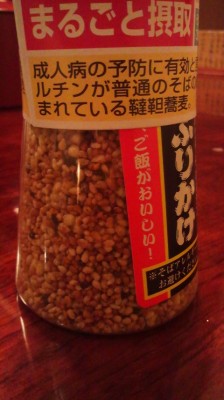 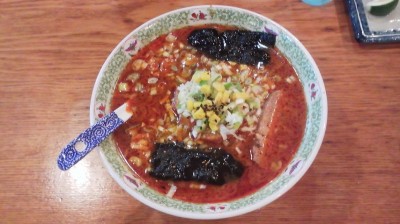 If you are a sesame seed lover, like me, try this amazing ramen dish at the GANKO-YA ramen shop at the corner of the Noda Line and Nishi O-Dori. It contains gobs of sesame paste and hot Chinese oil (RAYU-). Just ask for the DENKI RAMEN (Electric Noodles!)