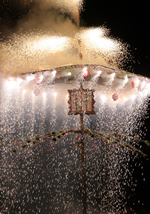 There is an interesting event that takes place tonight (Aug 15th) that includes Bon dancing ( described in my last post), as well as professional Enka entertainment and a unique RAIN INVOCATION CEREMONY (amagoi- 雨乞い). I’m talking about the Karakasa-Mando at Niihari’s ( now part of Tsuchiura) Washi Shrine. I have been there before but unfortunately will not be able to not make it today. It is a perfect place to experience a small village summer festival, swarthy night-air with the girls in colorful yukata, lots of food stalls, festival music (hayashi) and plenty of speeches.

My first time at that event I had really wanted to get a good seat for watching the Karakasa, a kind of giant tanabata decoration, which when lit, sizzles like a roman candle. I found a good spot, sat down, and waited for the big moment. I waited and waited, in the dark. My eyes grew accustomed the lack of light and my pupils probably expanded to there limit. When the fuse was finally lit and the Karakasa burst into life, I was completely and painfully BLINDED. After the few seconds it took to adjust my eyes, the Karakasa had burned itself out. I didn’t see anything! I could do nothing but laugh at the absurdity of having waited so long in anticipation. If you want to have a look (and listen) though, see this page.

And for a view of what you would miss ( or WOULDNT MISS) if you dont get there tonight:

As I said before I spent the day (as I usually do on August 15th) at controversial Yasukuni Shrine, where tens of thousands passed through in the PULVERIZING HEAT to pay their respects to the soldiers who have fallen in Japan’s wars since the Meiji Restoration (1868), with special emphasis on WWll, since it was on this day that that war ended.

I have many amazing things to tell and lots of pictures as well, but its been a very long day and you probably don’t want to hear about it until tomorrow.