The Summer Hanabi (fireworks) Season in Tokyo (and the Kanto Area) Swings Into Full Gear This Coming Saturday Night (July 30th) with the Great Sumida River Hanabi Festival- and many other events through August 29 July, 2016 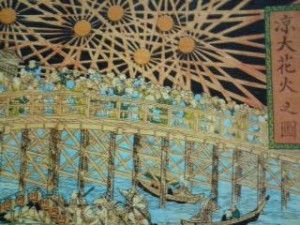 This coming Saturday (the 30th) will be the 4th Saturday of July, and as all Edo-Ko ( natives of Tokyo`s Shita-Machi district) know, that means tonight there will be FIREWORKS ( hanabi) over the Sumida River near Asakusa Station. Not only is this Tokyo`s largest and most famous annual pyrotechnical event, it is also the oldest, with the tradition having started way back in 1733 ( with only brief interruptions during the war years 1940-1947, and later, because of traffic and crowd related logistical problems, between 1962 and 1977 ).

Considering how close Tsukuba is to that part of Tokyo ( its only about 40 minutes away by the Tsukuba Express), it has always surprised me how few Tsukubans, either native or new resident have ever attended this great event. When I ask friends and aquaintances if they HAVE ever done so the response I get is almost always a strong NO, which seems to imply that I was crazy for even asking.

The reason for this is not simply because The Sumida River Fireworks Festival is always incredibly crowded ( with nearly a million people packed into the area), or that it is too hot ( most Japanese usually DO associate fireworks with summer anyway). It is because the people who live in Southern Ibaraki Prefecture ( where Tsukuba is located), have a special pride in our own great regional fireworks event- The Tsuchiura Fireworks Competition- which is held in the cool of October and can be seen in comfort from the nearby rice fields ( after harvesting of course!) and even  from the windows of many homes in Tsukuba. 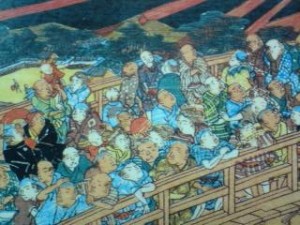 Still, with the TX`s direct service to Asakusa Station it IS tempting to go check out one of THE great Edo ( Tokyo) traditions that still lives on. I could even say, that for those of us who love the Tsuchiura Fireworks Competition, going to the Sumida River Fireworks Festival could be said to be an act of paying tribute to what in fact is the MODEL for Tsuchiura`s event, which has place over the Sakura River since 1925. 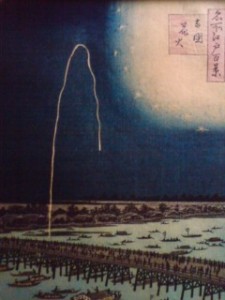 Let me explain how this is so.

The Sumida River fireworks started out ( in 1733) as part of a ceremony to console the spirits of those who died the previous years in a famine ( and subsequent epidemics) which had ravaged the city. The Shogunate planned supplications to SUIJIN, the Water, or River God. Permission was given to a pyrotechnic firm, Kagiya, to launch fireworks, which, like incense, vanished into thin air, as if taken up by the souls of the dead.

The Sumida River Fireworks were a great hit, and were in fact  not  just a  one night event- they were launched nearly EVERY NIGHT over the the course of two summer months each year ( until the Meiji Period when it was scaled down to once a year), set off on demand as ordered by paying patrons who came to the riverside tea houses and restaurants to enjoy the cooler air by the river. The fireworks became an important part of a complex and booming SHITA-MACHI summer economy, and became symbolic of Edo in that season.

In the same way, in Tsuchiura,the Buddhist monk Baiho of the Zenryu-Ji Temple, suggested a fireworks event as a way of consoling the spirits of pilots who had died training over Lake kasumigaura ( this is long before WWII), and of course as way of reviving the local economy ( ala Shita Machi). The reason that the event is held over the Sakura River and not the lake, is that because of the Tokyo event, fireworks were connected in peoples minds with RIVERS. 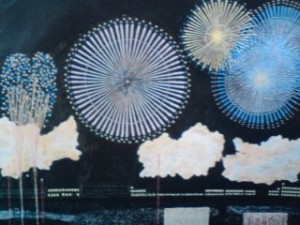 And more info ( and logistics) regarding the big event in Tokyo:

With the sultry summer heat, the huge Yukata-clad crowds, the beautiful fire FLOWERS ( the direct translation of the Japanese characters for fireworks) and the lingering smell of the gun-powder wafting in the air- tonight should provide an UNFORGETTABLE Edo experience. You can even join in shouting praise for the fireworks makers- KAGIYA!! TAMAYA!!! along with the locals ( much in the same way that the names of Kabuki actors are shouted out in appreciation!)

I will probably pass, however, and wait for October!

The Sumida Fireworks event will be horribly crowded even by Japanese standards. Also, with all the tall buildings, it is difficult to get a good position for viewing the fireworks. People with money to burn reserve hotel rooms with a view, or seats on a special fireworks viewing river cruises. For those who don’t stake a claim on a good spot early in the day ( a ridiculous thing to do in this heat anyway) it must be remembered that there is NO STANDING in the places from which the HANABI can be seen. The police DO NOT LET YOU STOP, and like sharks, you just have to keep moving! If you have little kids, I would strongly recommend that you DO NOT go to this event with them !