Sixteen-Year-Old Tsukuba Boy Kills Women with Ice-Pick – and Shows up at Police Station with Parents to Turn Himself In 7 July, 2016 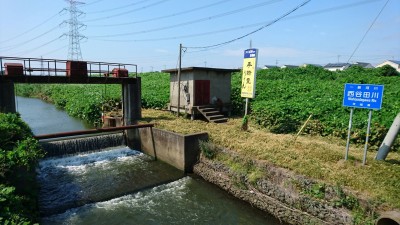 The Nishiyadagawa River (西谷田川) where it passes near the Midorino Station in Tsukuba. Further south, in Ryugasaki, close to where it pours into Lake Ushiku, the body of Yasuko Shinji (42) was discovered. She was stabbed to death by a 16 year-old high-school student. The motive is as yet unknown.

On the night of June 30th, Yasuko Shinji (進士康子), a forty-two year old woman who lived alone with her elderly father in Ushiku City (Tsukuba`s neighbor to the south), never came home. On June fifth, at about 4 PM, a man was taking an afternoon stroll  along the Nishiyadagawa (西谷田川) River (which runs through Tsukuba and flows into Lake Ushiku). He noticed something unusual in the water. It was a human body floating face-up among the reeds. He immediately called 110, the emergency hot-line. The police arrived on the scene and fished out the bare-footed body of a woman dressed in a blue short-sleeved T-shirt and blue-jeans – not only badly decomposed – but also savagely mutilated. Later police determined the corpse to be that of Yasuko Shinji.

She had apparently been stabbed multiple times in the back and head with an ice-pick (or some similar object).

When police questioned the father, 76-year old Katsuya, he told them that his daughter neither had a job, nor socialized. Neighbors confirmed this, saying that they had never heard of Yasuko-san, whose mother had died years earlier, having had any trouble with anyone.

To the police, it must have seemed like it was going to be a tough case to solve at that point – and it might never have been solved, if it were not for the fact that on July 6th, a mother and father entered the Tsukuba Central Police Station, accompanied by their 16-year-old son. The young man,  a second-year student at one of Tsukuba`s high-schools, then proceeded to turn himself in, confessing to have stabbed Ms. Shinji and dumping her body into the river.

He said that he had never been acquainted with the victim.

Since the killer is legally a minor, his name has not been released, and the only information that police have given the press is his age (16) and the fact that he was a second year student at a Prefectural High School in Tsukuba.

Well… today one of Tsukuba`s Prefectural High Schools was closed for the day – Kukizaki High School – the closest of Tsukuba High-Schools to the scene of the crime.

I will let you know when I find out more……….