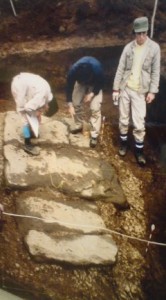 By Avi Landau
Kofun (古墳), the ancient burial mounds which were erected in various shapes and sizes in  Japan between the 3rd and 8th centuries AD, help define Japanese history and the Japanese landscape. Their Golden Age, a period between the 4th and 6th Centuries is actually named after them- The Kofun Period (KOFUN JIDAI), and because these mounds are now usually still forested and left undeveloped (because they are tombs) they often make  for the only oases of greenery on Japan`s densely populated plains.
There are over 100,000 of these Kofun in Japan, and about 200 right here within the Tsukuba City limits ( and it is highly likely that any wooded hill that you see is a Kofun).
The earliest of these tumuli were erected in Western Japan ( near Osaka, Nara and Kyoto) in the late 3rd century, for interring the local elite. The custom then spread to the northern part of the island of Kyushu. Later, when Eastern Japan ( including what is now Tsukuba City) fell into the Yamato sphere of influence, kofun  also proliferated there. ( The custom eventually died out with the spread of Buddhism when great men erected temples instead of large tombs.)
From century to century, and from region to region there was of course  variation in kofun FASHION. The most representative of their shapes  is known in English as the KEY-HOLE style (zenpo-koen fun, 前方後円墳)-  because they look like an old fashioned key-hole when viewed from the air. But as I have just said , these tombs came in many shapes and sizes ( taking up anywhere from a few meters to a few acres! In fact Emperor Nintoku`s Key-hole shaped kofun in Osaka Prefecture is one of the largest, if not THE largest tomb in the world).
Another important feature of kofun is the typical array of funerary objects which they usually contain (besides the bones of the deceased). Most famous are the clay figurines called HANIWA (埴輪)and the tadpole ( or fetus?) shaped beads called MAGATAMA. Also typical are swords, armor, mirrors,etc.
It is especially the HANIWA figurines that can be a great source of information ( all speculative , of course) on Japan in that period, a time a which writing had not yet been introduced to th archipelago.
These figurines, which depict both men and women, aristocrats and commoners, and a variety of animals, can give scholars and laymen alike, some food for thought in terms of what life was like in Japan during the formative years of the Yamato State.
One feature of Kofun Period life that  haniwa help us  to understand is HAIR-STYLE.
(Now anyone living in Japan knows that the question of hair style is not one to triffle at here. I have long been amazed at how many hair salons there are here in Tsukuba alone. It seems that almost any interesting looking new building that I see going up and hope will be a new restaurant turns out to be a beauty parlor. I often stop to wonder, how in hard times like these, they could all stay in business.)
Anyway,there are numerous examples of haniwa figurines which show us how the men of the Kofun Period wore their hair. Based on the figurines, it seems as if there was only one style ( acceptable for the figurines at least)-  called MIZURA (みずら、美豆良) which involved parting the hair in the middle and then forming two loops on the side.
And though there are many haniwa which show this hairstyle, there was never any other evidence to confirm that the mizura actually was the style of the day. 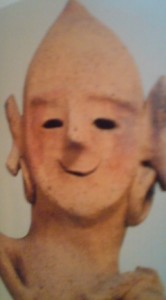 That is until the spring of 1983, when a great discovery was made in Niihari Village ( now part of Tsuchiura City), just over the city line from Tsukuba ( less than a ten minute drive from my house!).
Here is the story: 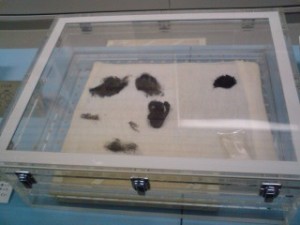 The hair, beard and MIZURA side-lock which were discovered INTACT inside the tomb at the Mushazuka Kofun

By the time KOFUN became common in this part of Japan, the custom of building burial mounds had become much less exclusive. Instead of one great king or strongman being buried in an immense tomb-mound, there were clusters of tombs built for dozens of lesser men of influence in one small area.
One such tomb cluster, had been well known to the farmers of Kamisakata in Niihari. Some of the graves had in fact been dug up during the Edo Period (1600-1868). Still there had been no scientific excavations of the site.
When farmers noticed that at one particular vegetable field the burdock ( GOBO, a vegetable with a very long edible root) was growing crooked, they realized that someting must be down there, under the soil. The local board of education came in to dig at he site, but what they found- a  burial chamber covered with very large stone slabs- made them realize that they would have to call in the heavy artillery- Tsukuba University`s Archaeology Department.
When work began and the tomb was opened, the professors and students sensed that they were onto something special- this grave had never, ever been looted. Something very rare. There was a great sense of anticipation ( and the students actually stood guard over the site for 24 hours a day, in shifts, of course). 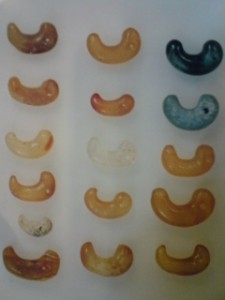 MAGATAMA beads found in the burial chamber at the Mushazuka Kofun

No one would be disappointed. Besides finding human remains, swords, magatama. and other interesting artifacts, a unique find was made. Human hair! Fragments of one of the deceased`s hair, both from the top  of the head and the intact loops of a MIZURA, as well as some of a beard, had survived the centuries- confirming that in those days people ( well, at least the upper classes) wore their hair in two loops! 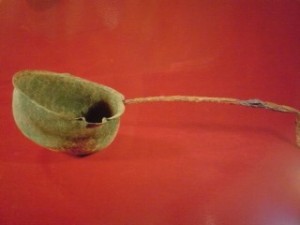 Another artifact unearthed at the Mushazuka Kofun

This year, the actual hair found at the site- now called the MUSHAZUKA KOFUN, along with the rest of the artifacts found by the archaeologists back in 1983, were on display at Tsuchiura`s excellent little archaeology museum. I visited the exhibition several times, always amazed ( and depressed) that that 1300 year old hair was in better shape than mine!
And though now the hair has been put away for storage you can still find an interesting exhibit on the excavation as well as a fine permanent exhibition on local archaeology. 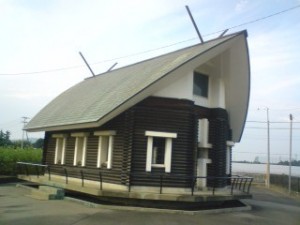 You might also want to stop by to have a look at the actual site. They have put up a protective structure over the tomb, but you can get a glimpse of the chamber if you peek through the windows.
As I have already mentioned, this area is full of KOFUN. I will write about some of the more interesting ones in the near future.
And remember. Nearly every wooded hill you see in in many parts of Japan is a KOFUN. Many ( or most) of them have not yet been systematically excavated. Just thinking about what finds might be contained within their chambers- makes my hair stand on end!
Good night! 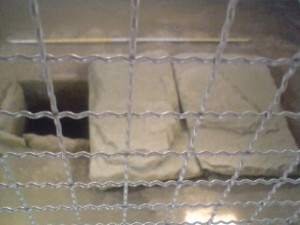 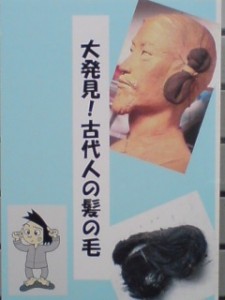 A poster for an exhibit at Tsuchiura`s Archaeology Museum ( FURUSATO TO REKISHI SHIRYOKAN)- It reads- Great discovery! Ancient human hair! 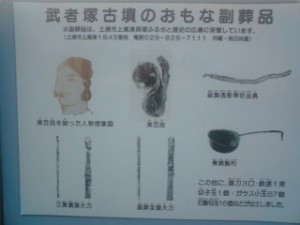 A signboard detailing some of what was discovered at the Mushazuka Kofun in Niihari, Tsuchiura

Some more interesting KOFUN in the Tsukuba area 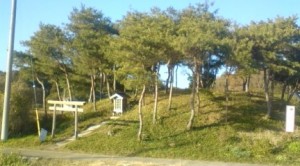 A kofun burial mound by the shores of kasumigaura- unique in that it is said that within is buried AN OX! (Kasumigaura City) 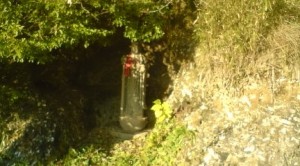 Also along the shores of lake Kasumigaura this cluster of burial chambers made of OYSTER SHELLS! 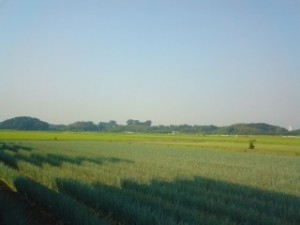 Wooded hill like these adjacent to cultivated fields are often KOFUN