Long-Hidden Treasures from Afghanistan at the National Museum in Ueno – AT LAST (thru June 19th) 11 June, 2016 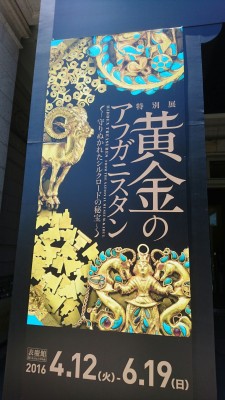 A billboard reading “Golden Afghanistan” stands at the entrance to the Hyokeikan (on the grounds of the National Museum in Ueno) where the Hidden Treasures from the National Museum, Kabul Exhibition is on (till June 19th) – these works, hidden away for 12 years of civil war and Taliban rule have been touring the world since 2007 – and now they`ve finally made it here to Japan !

The National Museum in Kabul Afghanistan was established in 1922 as a mere ” Cabinet of Curiosities”. However,in the following decades, after several major archaeological discoveries were made within Afghan territory, it came to be recognized as THE most important collection in all of Central Asia. The artifacts it housed were not merely astonishing in their beauty, craftmanship and historical importance – but also in the variety of civilizations and influences they represented. This reflected the fact that the territory on which the country called Afghanistan now lies sat just about right in the middle of the “Silk-Road” (though I think Silk-Roads, would be more accurate) trading routes connecting “East” and “West” and visa versa – and the fact that the area had been ruled by a succession of varying powers. In 1978 the museum was said to have housed 100,000 treasures….. but then the troubles began………. 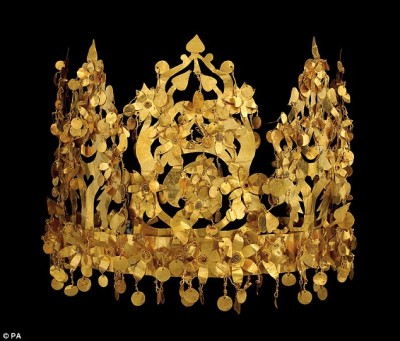 A golden crown (from the 1st century AD) found in a grave at the Tillya Tepe archaeological site in northern Afghanistan (discovered in 1978 by a team headed by Viktor Sarianidi. Because this crown can be easily taken apart and then reassembled, it is believed that the people it belonged to were nomadic. There were a total of six graves found at the site.

In April 1978, in what was called the Saur Revolution, Afghanistan was taken over by the communist People`s Democratic Party of Afghanistan. Quickly, opponents of the new regime rose up against it in various part of the country – and the Soviet Union decided it would have to come in to keep the government propped up. The United States, always trying to push back Soviet influence (no matter if that influence was bad or good), armed, trained and funded the Mujahiddeen, Islamic fighters – something that would come back to haunt them later. The Soviet War in Afghanistan (1979-1989) resulted in terrific losses of life (estimates are between 850,000 to 1.5 million Afghan civilian deaths) and damage to property – and archaeological treasures. But the troubles did not end with the Soviet withdrawal. There were years of  civil war during which the country came to be ruled by the fanatically religious Taliban – and during which much (70%) of the National Museum`s collection disappeared. In 1994, the National Museum itself was mostly destroyed by rocket fire. Furthermore, after the Taliban did take power, they proceeded to demolish some of the world`s most important Buddhist monuments. 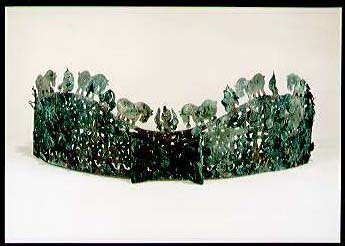 Seeing that crown discovered in Afghanistan reminded me of this amazing horse-motifed crown unearthed at a Kofun burial-mound in Namegata City, Ibaraki Prefecture (on a peninsula that juts out into Lake Kasumigaura.

Fortunately, in 1989, some of the most valuable (and portable)  works, were secretly stored away for safe keeping in the vaults of the Central Bank in the Arg – the Presidential Palace. And after the damage to the museum in 1994, more works were hidden away in certain safe places by the museum staff. 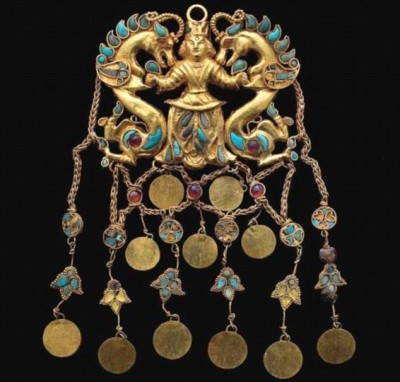 The world at large, however, had no idea about these “rescue” operations. And because the museum had been badly damaged and looted, it was assumed that the great collection – especially the great hoard of Bactrian Gold (discovered one year before the Soviet Invasion) was lost. The fact that these treasures had actually been hidden away was only known, apparently, to five trusted “key-keepers” (known now as the Tawadars)- all sworn to secrecy. 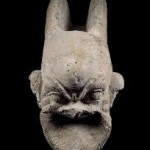 2nd century gargoyle mask fron the Ai Khanoum site where there was a major Greek settlement that developed along with the advances of Alexander the Great. This most remote outpost of the Greek Empire had a gymnasium, a theater, and LOTS of Greek art! 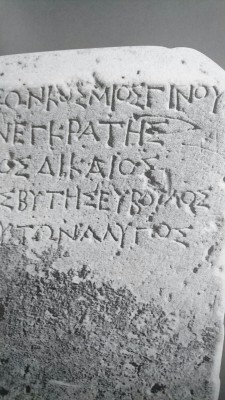 Limestone stele base with Greek words of wisdom – “When you are young study hard” – ” When you are a young man stay sober”- “When you are old, be wise” – “Die without pain”, etc. (3rd century BC) discovered at the ruins of the central shrine in the ruins of Ai Khanum, a city founded by one of Alexander the Great`s generals. 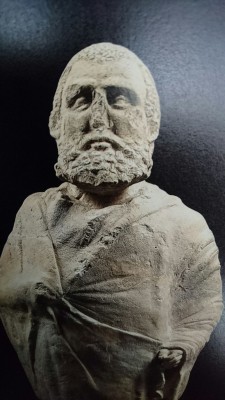 A statue of the director of the gymnasium at Ai Khanum

How dramatic it was then, when in 2003, after the Taliban had fled the capital, the Tawadars (key-holders) were finally assembled (with no little difficulty), the doors to the main storage vault opened – and the treasures found intact. There at the time to witness the occasion, were the discoverer of the golden hoard, Viktor Sarianidi, and a representative of the (American) National Geographic Society. Yes, all the hidden items were there – 22,000 pieces! It is one of the great “Art Rescue” stories  – and certainly adds extra spice to the already astonishing physical presence of the objects themselves. 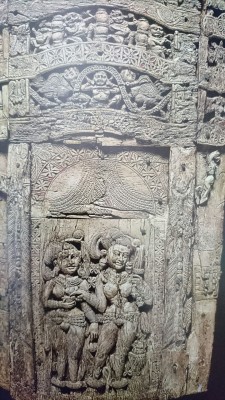 Decorative plaque made of ivory showing women standing under a gateway (1st century AD) from Begram, just north of Kabul. Begram was an important point along the silk road – artifacts from Alexandria (in Egypt), China, and India (this ivory), have been found here. This piece, and its companions, were found buried beneath stones, where they remained untouched for 2,000 years until they were discovered.

Since 2007, many of these works have been on the road – touring the world : France, the U.S., Canada, Germany, Australia, Germany, Italy, the Netherlands….. and now, after almost ten years – Japan! It has taken a long time to get here, and that`s too bad, since there was special concern in Japan over the loss of ancient Buddhist art at the hands of the Taliban (especially the great rock carvings at Bamiyan). Japan and the Japanese have been active in recovering stolen Afghan treasures – and 15 of the 231 artifacts now at the National Museum in Ueno were recovered thanks to the efforts of the Japanese Committee for the Preservation of Displaced Cultural Property. A total of 102 recovered objects, will be returned to Afghanistan after the exhibition ends 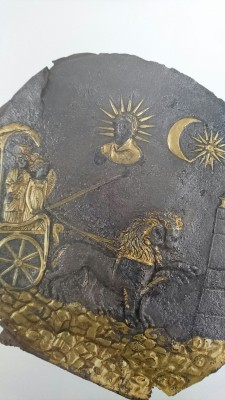 It goes without saying that this exhibition is well worth a visit – and besides delighting your “gentler senses”, it will get you to thinking about lots of different things. For example, what is a country`s “national culture” ? – I couldn`t help pondering that since the people`s and cultures that make up the present Afghanistan, are most likely not the same people (and definitely not the same culture) as the ones that created the artifacts in the exhibition. So what makes these “National Treasures” – their presence within a modern country`s borders? I would rather consider them “World Treasures”.

I was also very interested in the fact that the contents of the ancient burial tombs at Tillya Tepe reminded me of ancient Japanese burial mounds (kofun).

In fact, the curators point out that there is a Tillya Tepe type crown in the Imperial Shosoin Treasure-House in Nara – a gift from the continent on the occasion of the opening of the great Todai ji Temple in Nara in the 8th century.

The curators DO NOT point out, however, that very similar funerary objects are found in tombs around Japan – even in Ibaraki Prefecture. Maybe its just too disturbing for the Japanese general public`s image of their national selves to think that the ancient culture of the Japanese archipelago was also created by various different peoples and civilizations. 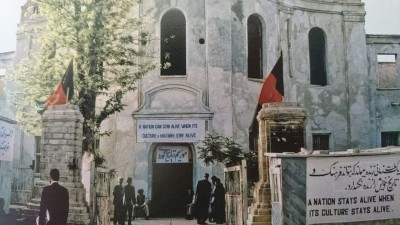 Signs outside National Museum in Kabul, Afghanistan : A Nation Can Stay Alive When its History and Culture Stay Alive 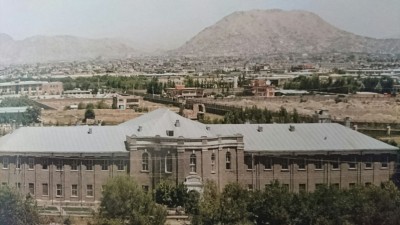 The National Museum in Kabul, Afghanistan 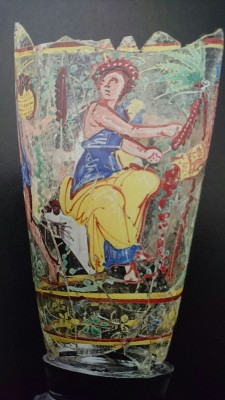 Painted glass goblet (1st century AD) found at Begram, a city founded by Alexander the Great, just north of present-day Kabul. This was an area in which there was exhange between Greek and Buddhist ideas – especially during the rule of King Menander 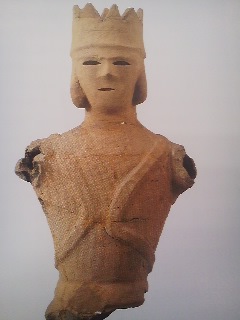