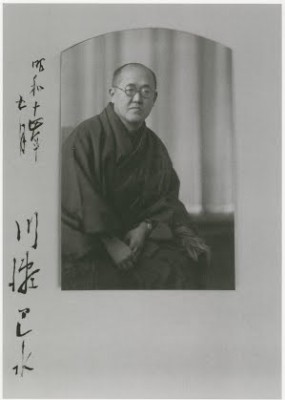 Kawase Hasui (1883-1957) was an important designer of “new-style” wood-block prints (shin-hanga) that utilized certain elements of Western art ( reflected especially in huis use of perspective and light) while still focusing on certain traditional subjects such as “famous Places”, and landscapes. His works are deeply beautiful – and quite astounding when you think about how they were made – by carving lines into wood !

When Westerners first encountered these prints – often as the wrapping paper in which imported Japanese pottery or lacquerware came in, they became a sensation – a late 19th century craze for what is known as Japonisme – and these Edo Period (1600 -1868) prints are still held in the minds of many non-Japanese, as their image of Japanese art and culture (don`t you have at least one hanging in your house or emblazoning a coffee mug or T-shirt?)

Some of Europe`s best known and important artists were clearly influenced by Japanese prints – most notably Manet, Monet, Van Gogh, Gaugin,Toulouse-Lautrec, Whistler – and even the composer Debussy (who supposedly was inspired by Japanese prints to composed his famous “La Mer” 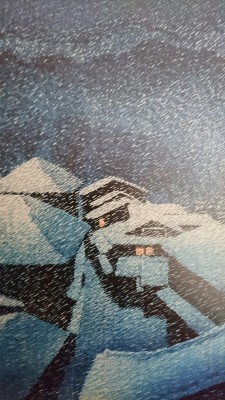 But while the popularity of Ukiyo-e prints grew in the West, it faded in Japan – as national policies of modernization and Westernization continued to intensify. So while many of the most notable ukiyo-e works were being sold to collectors and museums abroad, siphoning off many would-be National Treasures – Japanese artists were concentrating on mastering techniques of Western art, and oil painting came to be considered the greatest test of an artist`s mettle. 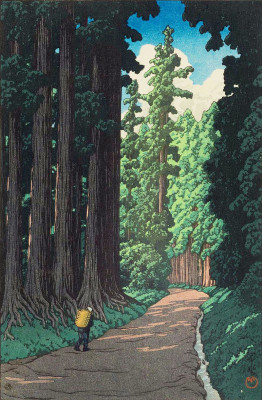 The foreign market for Japanese prints remained strong, however, and there were those who took advantage of it. The publisher Watanabe Shozaburo had been involved in producing traditionally motifed Japanese prints  for export and sale to collectors abroad and tourists. In 1915 he coined the term ” Shin-Hanga” (new-style prints) for these works he was promoting. The most notable of the artists working in this new genre – which applied certain Western techiques (especially in the use of perspective) to what were otherwise easily recognizable as Japanese prints, were Hashiguchi Goyo, Ito Shinsui (both skillful at depicting women) the Englishman Charles Bartlett (who created Indian, as well as Japanese Scenes) – and Kawase Hasui (who created over 600 works for Watanabe) – the subject of a special (free) exhibition at Tsukuba Bank`s Main Office near Tsukuba Center (thru June 30th) 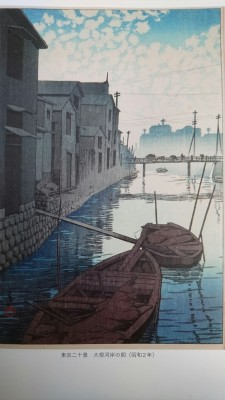 Dawn at the Daikon Gashi Riverbank- from Twenty scenes of Tokyo (1927) – this work is rare among Kawase Hasui`s works in that it depict elements of modern technology (the utility poles). Unlike the great Impressionist artists, who were often subtly showing how industrialization and modernization were destroying natural landscapes – he almost always gives us idyllic, nostalgic images images of a traditional Japan – without any unseemly smoke, steam or steel.

I guess you could say that Hasui was destined to be a print-maker. He went into art depsite his parents strong objections (they wanted him to enter the family wholesaling business) and desoite the urging of his teachers (and the call of the times) that he become an oil painter in the Western mode. His determination to work as a print-maker focusing on traditional themes paid off in the end, since he became one of the most prominent Shin-Hanga artists (popular amongst Western collectors including apparently Steve Jobs) and being declared a Living National Treasure in Japan in 1956 – though he is still quite unknown in Japan, even to those very interested in art. 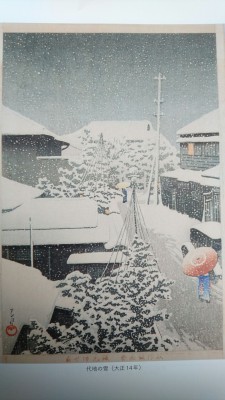 In the Snow – another rare Hasui work featuring utility poles. 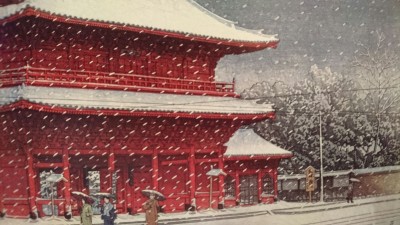 One of Hasui`s most famous works – Zo-joji in the snow (1953) only has an inconspicuous eletric line running across it.

What strikes me most about his work (besides its un-ukiyo-e-like realism) is his sense of nostalgia for a Japan of past ages (or an ideal one that never existed!). Very few of his works indicate by their content alone, that they were created in the 20th century. There are also few human figures, and when they do appear, they are portrayed as being very small beside the grand nature (and by this I also refer to the weather, which he pays much attention to!) or architecture which is the main focus of the composition. These figures express a loneliness that cannot be found in “traditional” ukiyo-e works.

And it is also interesting to note that while he did apparently travel extensively in Japan preparing sketches for his prints, he did not focus exclusivley on THE most famous sights, or cities, as his Edo Period predecessors did. Many of his works feature obscure locales in our own Ibaraki Prefecture (several included in the current exhibition) – even one showing a boat moored along a river in Tsuchiura (Tsukuba`s neighbor to the east). 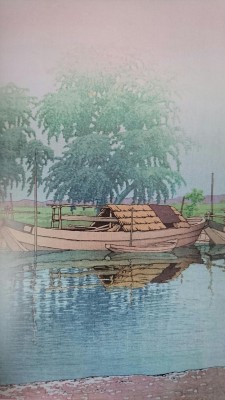 This exhibition is ironically a great chance for Japanese art-lovers to get to know Kawase – who enjoyed great success throughout his career selling works to foreigners. It will also be eye-opening for those (Japanese and non-Japanese alike) who thought that great print-making ended with Hiroshige and Hokusai. 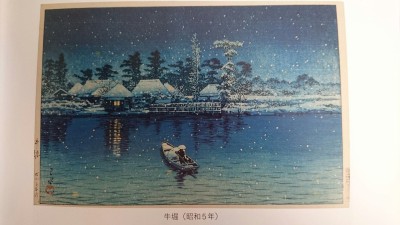 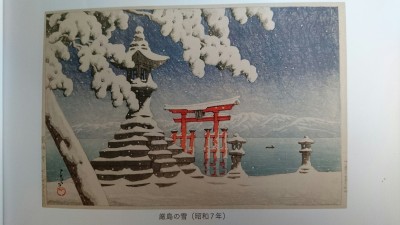 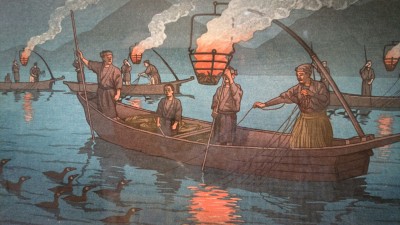 Cormorant Fishing on the Nagara River (1954) -Did you know that all the cormorants used by the Imperial Household Agency (which oversees this activity, are caught in Ibaraki Prefecture`s Unomisaki (literally- Cape Cormorant!) 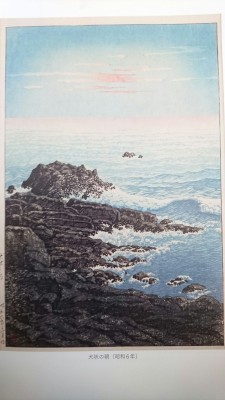 Inu bo-saki (Kawase Hasui) 1931. This is the easternmost tip of Japan`s largest island (Honshu), and a popular place for praying to the “First Sunrise” of the new year. 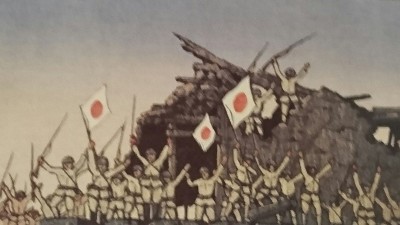 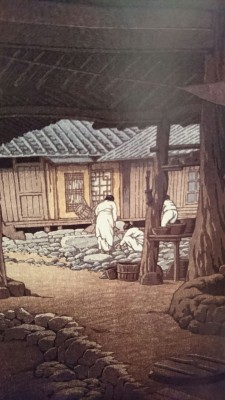 or his depictions of the Korean Penininsula (which from 1910 to 1945 were part of the Empire of Japan). These would have given a fuller picture of Hasui, the man, and his times.

The Tsukuba Bank is a 5-10 minute walk to the south-west of the Tsukuba Center TX Terminal. This exhibit is free – and you will receive a complimentary full-color catalogue, as well.

Opening hours are 9-5 everyday till the exhibition closes.

I would also suggest that you watch the video that they keep running out in the lobby – not only for a glimpse at the process of how Japanese prints are made (which is fascinating) – but also for a deeper understanding of today`s more nationally-conscious Japan. The video presents Hasui as someone who spent his life searching for the “real Japan” without mentioning the fact that he was often creating a product catering to foreign tastes – an idealized, long vanished Japan. There is no discussion of the fact that in the days Hasui was active in, the Japanese had very little interest a  rustic and charming Japan. The video makes no mention of his connections and success abroad . The only reference to this is the narrator saying “And he is has a high reputation abroad” – as they show a still photo of Steve Jobs – a more recent admirer of Hasui, without ever mentioning how important foreigners were in the rise and success of Shin Hanga. Why would they leave such information out and make Hasui a pure Japanese phenomenon – Hmmmm…… well……lets leave that for another post! 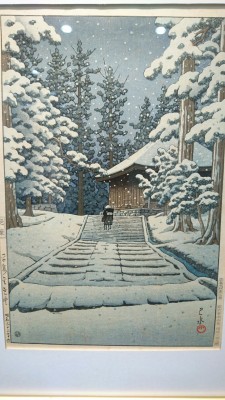 Hasui`s poignant final design. Before succumbing to cancer at the age of 74, the veteran print-maker re-worked an earlier piece showing a empty staicase leading up to the Golden Hall at the Chuzonji Temple in Hiraizumi. Realizing that the end was near, Hasui added snow and a lone- figure (himself?) nearing the hall.